Opal Tometi at the UN 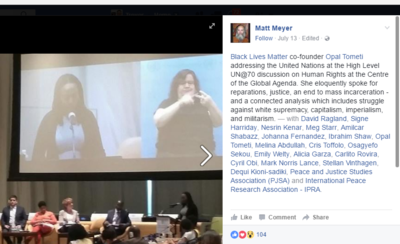 NOlympics LA held its first public forum on the LA 2024 2028 Olympic bid, August 2017,which provided the first truly open and accessible opportunity for our coalition and members of the public to address the negative consequences of a 2028 Olympics on all of Los Angeles. The evening centered on a series of panel discussions featuring representatives from our amazing partner organizations including the LA Tenants Union, Crenshaw Subway Coalition, BLM-LA, LA CAN, AF3IRM, Socialist Alternative, March and Rally LA, SAJE, Anti-Racist Action, Iraq Veterans Against the War, and Ground Game LA. Guest speakers from the UCLA Departments of History and African-American Studies joined in as well for what was a spirited dissection of Olympic and Los Angeles history, declarations of where we are in 2017, and ideas for how to organize and improve our communities moving forward.[1] 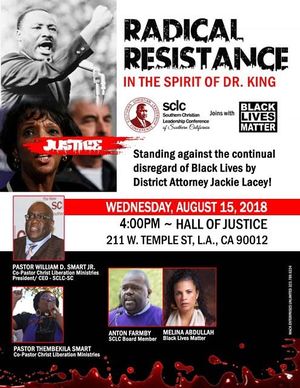 Yawl. Look at how cute our BLM squad is. Black folks from around the U.S and Canada is planning for victory yawl, in the Lumumba Center of all places (super critical piece).

Deep love to the folks in Cooperation Jackson, Malcolm X Grassroots Movement, Sendolo Diaminah and Adrienne Maree Brown for teaching us, holding us down and to our principles.