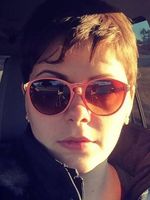 Melanie Barron is a Knoxville Tennessee activist. She is married to Ben Allen

She is an Organizer at United Campus Workers, and a PhD Candidate at the University of Tennessee.

Waging a Two-Pronged Battle: Socialists Assess How to Win From a Biden Candidacy

Road Signs asked three socialists who are deep in the trenches of electoral organizing in the US South to share their perspective on what’s at stake in the 2020 election. How should we engage the battle to defeat Trump, even as we grow our independent political bases, build pressure on Biden to embrace progressive demands, win people to Socialism and shift the U.S. political terrain?

Tim Wise, one of the most prominent anti-racism writers and speakers in the country, wsa at UTK in the UC Auditorium. Entitled "An Evening with Tim Wise: 'Beyond Diversity: Challenging Racism in an Age of Backlash,'" Wise will address institutional diversity programs and bring attention to how such programs often fail.

The event was organized and coordinated by the UTK Progressive Student Alliance . Melanie Barron, graudate student in geography and member of PSA, said that the goal of bringing Wise to UT was to shed more light on institutional racism.

"We noticed overall that there is a problem with students ... not understanding racism as an interpersonal issues versus being an institutional problem," Barron said. "People would say ... 'Racism isn't a big deal any more.' But if you know anything about the United States and current problems, especially with poverty ... then you know that institutional racism is still a big problem."

"Thinking about racism in an institutional way makes some people kind of uncomfortable, especially white people," Barron said. "Because a lot of people think that if you think of white privilege it automatically puts this undue burden on you." [[ Jordan Welsh]], freshman in history and fellow PSA member, shared the sentiment.

Wise has also written a number of books on the subject of race and white privilege including "Dear White America: Letter to a New Minority," "Affirmative Action: Racial Preference in Black and White" and "White Like Me: Reflections on Race from a Privileged Son."

Numerous UT departments and organizations helped the PSA fund this event, including the geography, sociology, American Studies, English and global studies departments, as well as the College of Social Work. PSA also applied for and was awarded a $5,000 grant from UT's Ready for the World committee.[1]

To the Editor of the Daily Beacon:

We offer the following concerns about the recently announced “Big Orange, Big Ideas” campaign to promote the University of Tennessee through the development of a brand. We hope that the administration will accept our constructive criticism as representative of a popular voice on campus which does not share the vision of UT promoted by the “branding” campaign.

As a first step toward reasserting our identity as something more than a commodity, we propose that our university remove the “Big Orange, Big Ideas” banner from the outside of Hodges Library. The Hodges Library is a monument to the complexity of ideas and the universality of human knowledge. This is the site where school colors and simple slogans are the most out-of-place, and removing the banner would be a dignified recognition of the value of UT. 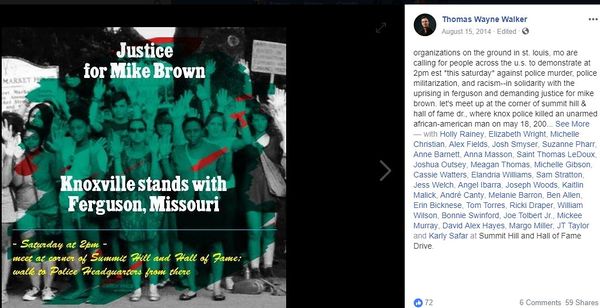 State lawmakers will join the United Campus Workers, UT College Democrats, Progressive Student Alliance and Statewide Organizing for Community Empowerment during a fact-finding trip to learn more about the potential impact of the Governor's plan to possibly bring privatization to the campus of UT Knoxville.

Senate Minority Leader Lee Harris and state Rep. John Ray Clemmons will hear from campus employees, students and faculty about the potential impacts that layoffs and outsourcing will have on their families and campus life. Organized by JT Taylor.

Special guest Cazembe Jackson, our trans brother and bad ass organizer for South will share his story as a transman in the movement and how he held his comrades accountable for his pronouns. He will also make awareness for pronouns and elevating trans existance more intersectional mentioning policy brutality and mass incarceration of black transwomen.

Those indicating they would attend, on Facebook included Melanie Barron.[8]

Those saying they would attend, on Facebook included Melanie Barron.[9] 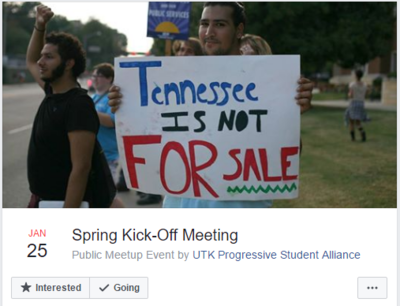 Beyond Shell Shock: Labor after the Trump disaster was hosted by Freedom Road Socialist Organization, Sunday, February 26 at 8 PM - 9:30 PM.

Join us in this webcast to take a hard look at the place we're in as a labor movement - and consider how we can make the labor movement be a leading force in the resistance to Trump and the fight for a better world.

What's our strategy? What kinds of alliances do we need? Do we just play defense?

In the face of National Right to Work, vicious attacks on workers of color in and out of the workplace, escalating divisions in the AFLCIO and the Democratic Party, and more we've got our work cut out for us. Let's figure out how to win. 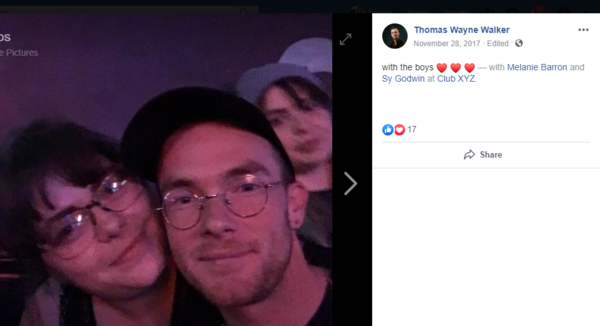 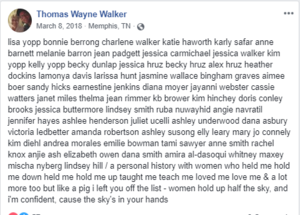 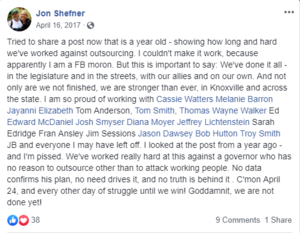 Tried to share a post now that is a year old - showing how long and hard we've worked against outsourcing. I couldn't make it work, because apparently I am a FB moron. But this is important to say: We've done it all - in the legislature and in the streets, with our allies and on our own. And not only are we not finished, we are stronger than ever, in Knoxville and across the state. I am so proud of working with Cassie Watters, Melanie Barron, Jayanni Elizabeth, Tom Anderson, Tom Smith, Thomas Wayne Walker, Ed McDaniel, Josh Smyser, Diana Moyer, Jeffrey Lichtenstein, Sarah Eldridge, Fran Ansley, Jim Sessions, Jason Dawsey, Bob Hutton, Troy Smith, JB and everyone I may have left off. I looked at the post from a year ago - and I'm pissed. We've worked really hard at this against a governor who has no reason to outsource other than to attack working people. No data confirms his plan, no need drives it, and no truth is behind it . C'mon April 24, and every other day of struggle until we win! Goddamnit, we are not done yet!