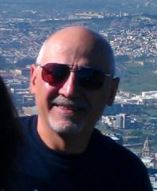 Template:TOCnestleft Mazen Malik is a Senior Economist at State at the Oregon State Legislature, where he has worked since 1992. 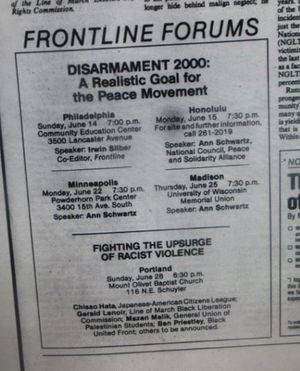 Mazen Malik, was in 2001, Oregon liaison for the American-Arab Anti-Discrimination Committee.[1]

Mazen Malik, an Arab-American and Oregon resident, discussed the situation in Palestine April 10 2002, at 6 p.m. today at Oregon State University.

Student speakers will join Malik for the discussion in the Joyce Powell Learning Center in OSU's Memorial Union. A time for discussion and reflection will follow the talk.[2]

A Portland-area peace coalition that formed officially in mid-August 2001, to augment existing programs to support justice for the Palestinians suddenly doubled its membership on the day of terrorist attacks in New York, Washington, DC and Pennsylvania that killed untold thousands. Over 100 people representing diverse progressive organizations in the Portland metropolitan area turned out on the evening of Sept. 11 for an emergency meeting to share their grief over the tragedies at the World Trade Center and Pentagon and to coordinate actions in response to immediate threats of retaliation targeting the local Arab-American population.

Portland attorney Thomas Nelson facilitated the large gathering. A member of AUPHR and the National Lawyers Guild, Nelson recently returned from Jerusalem, where, along with other Americans in association with the International Solidarity Movement to Free Palestine, he participated in non-violent protests outside Orient House and was among those attacked by Israeli forces on horseback swinging billy clubs.

The goal of the meeting, Nelson explained, was to hear three lawyers speak on issues of civil rights for the benefit of groups and individuals who might be targeted for harassment, and to devise a unified plan of action to respond to government threats of military retaliation.

“Every time there’s a crisis the lamp gets brighter,” began lawyer and Guild member Allen Graf, referring to a Hebrew scripture which implies an opportunity to evolve. Graf said a high level of belligerent patriotism and jingoism could be expected as a result of the attack. “The...security state is going to tighten up,” he said, “and Arabs and Palestinians especially are going to get targeted.”

Graf asked for volunteer legal observers to sign up to monitor upcoming peace marches. Attorney Steve Sherlag explained the importance of remembering and writing down details of police mistreatment, and urged Arab Americans to defend themselves by knowing their rights.

Fellow AUPHR and Guild member Steve Goldberg discussed discrimination against Arab Americans and offered copies of federal and state employment law. It is critical, he explained, for everyone “to stand up for people who are being discriminated against.”

Dave Mazza, editor of the alternative weekly newspaper The Portland Alliance, called for participation in a Sept. 26 hearing at Portland’s City Hall to discuss renewal of the Portland Joint Terrorism Task Force. The task force was approved by the City Council in November 2000 to investigate criminal terrorist activity. According to the web site of the local police watchdog group CopWatch, however, the ordinance lacks clear language defining “criminal activity,” could allow for the targeting of legitimate political activity, and contains implications for the federalization of the police.

Several Palestinians present voiced their concerns over their personal safety. One suggested a meeting with Portland Police Chief Mark Kroeker, who had been invited to the meeting but was attending a simultaneous meeting of the Muslim Educational Trust. Another mentioned a phone call from a friend in Los Angeles whose mosque had received over 200 telephone threats. Mazen Malik, an economist and an activist working in the Palestine Arab-American Association, Americans United for Palestinian Human Rights and Friends of Sabeel, said that he was very worried about Arab children, including his own 8- and 10-year olds, who need the protection of local officials, the media, school administrators and teachers. Malik, whose family is from Nablus, asked for immediate concentration on these concerns, stating, “There are people fanning the flames of genocide and talking about lynching someone. We feel vulnerable and targeted,” he added.[3] 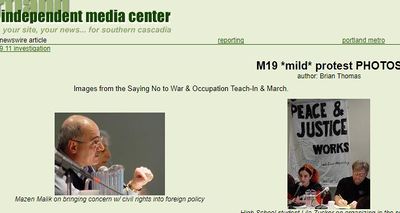 Shoppers and workers in Portland's Lloyd Center district took a break on a sunny Saturday afternoon to watch more than 1,200 Portlanders march through the neighborhood calling for peace. The April 20 2002 march was organized by Portland Peaceful Response Coalition, and other local groups to coincide with an international day of action called by peace activists and other progressives in the Western Hemisphere and Europe who are seeking an end to U.S. and Israeli violence.

The event started with a rally in northeast Portlandąs Holladay Park near Lloyd Center. A number of speakers outlined the shameful history of U.S. support of Israeli aggression against the Palestinian people ‹ over 30 years of invasions, occupations, killings, and other human rights violations. Despite the tremendous power facing the Palestinian people, they would prevail in the end asserted Mazen Malik, one of the organizers of the demonstration. Malik also lashed out at the hypocrisy of U.S. diplomatic efforts that put the responsibility for ending the violence entirely on the shoulders of Yasser Arafat.

"I don't see the Israeli government being cornered in two rooms and being asked to stop the violence," he stated.

Catherine Thommason of Physicians for Social Responsibility questioned the entire logic of the Bush administration's "war on terrorism."

"Terrorism is a strategy," Thommason told the crowd. "You can't bomb a strategy and go home."

The strongest response came for organizer's Will Seaman's call to action. Seaman reminded those present that the history of the U.S. is a history of imperialism and genocide that has always required citizens to stand up and resist.[4]

Former Congresswoman Elizabeth Furse was keynote speaker for the "No New War on Iraq!" march and rally for peace at noon on Saturday, October 5th 2002, starting at the South Park Blocks in downtown Portland. In addition to Congresswoman Furse, speakers included John Linder of Rethinking Schools, Mazen Malik of the Palestinian Arab-American Association, and Aliyah Strauss, president of WILPF of Israel. [5]

Mazen Malik took part in the Saying No to War & Occupation Teach-In & March, in Portland in 2005.[6]