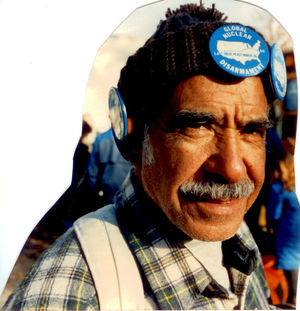 In 1937, Terrazas moved to Los Angeles, where he worked in the downtown produce market, for the Southern Pacific Railroad, maintaining and laying tracks, in a laundry and other places. In 1939 he brought his family to Los Angeles.

At the height of the Depression, the speakers at the street corners who discussed the devastation of working people impressed Mauricio. He joined[1]the Communist Party USA because he saw that they had an answer to the poverty and suffering he saw around him. He helped the party organize workers, which exposed him to other organizations helping the under-served.

In 1945, Mauricio became a truck driver at Safeway stores, where he worked for 20 years. In 1946, he married Irene Malagon, with whom he had four children: Eddie Terrazas, Linda Terrazas, Orlando Terrazas, and Conrado Terrazas.

Mauricio and Irene Terrazas were community activists. Mauricio tried to become involved in the Community Service Organization in Los Angeles, but they did not want members of the Communist Party.

In 1949 Terrazas volunteered for the successful Los Angeles City Council campaign of Edward Roybal. He also was involved in the American Committee for Protection of Foreign Born in the Los Angeles area. Around 1954, he helped found the Mexican American Political Association. During the 1950s the FBI followed him to his home and work, and Irene was called before the House Un-American Activities Committee. The Mexican American community struggles suffered greatly as a result of the McCarthy period. But the witch-hunters were unable to deter Mauricio.

In 1965, in the first Christmas for the United Farm Workers union grape boycott, Terrazas convinced Safeway Stores to donate a truck, which he drove to Delano filled with food and toys. Safeway stopped supporting these efforts when they became the target of the UFW boycott.

In the 1970s, Mauricio became involved with Teamsters for a Democratic Union to make his union more democratic.

In 1986, Mauricio Terrazas joined the Great Peace March for global nuclear disarmament. It began in Los Angeles and traveled for nine months to Washington D.C. Thousands of people joined the march. He met his second wife Jean at that march; they married soon after.

The couple continued their activism by opposing the war in Iraq. Mauricio was a reader of the People’s Weekly World until his death on July 8, 2009.

On Sunday, June 7, 1981, the Los Angeles Chapter of the New American Movement sponsored a Tribute to Ben Dobbs for "His lifelong commitment to socialism". The event was held at the Miramar-Sheraton Hotel, Santa Monica, California. Sponsors of the event included Mauricio Terrazas.[2]

The 40th Anniversary Commemoration Committee of the Chicano Moratoriums was formed in the summer 2009 by the Chair of the National Chicano Moratorium Committee of August 29, 1970 along with two independent Chicano Movement historians whom although not of the baby boomer generation, have become inspired by the Movimiento. The organization posted a list of significant “Chicano movement” activists on its website which included Mauricio Terrazas.[3]