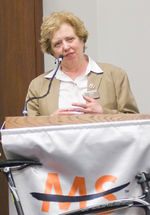 Mary Jo Kilroy is featured in a

Mary Jo Kilroy is an attorney and socialist affiliated Democratic former member of the United States House of Representatives, representing the 15th district of Ohio. Kilroy served eight years on the Columbus Board of Education and the last six years as a Franklin County Commissioner. She is married to labor union lawyer Robert Handelman.

The daughter of a pipe-fitter and World War II veteran, Mary Jo attended Cleveland State University for her Bachelors Degree, and then The Ohio State University for her JD. Mary Jo married Robert Handelman and settled in Columbus, Ohio with their two daughters, Julia and Rosa. She spent a number of years working in the private sector as a partner at the Handelman and Kilroy Law Firm, until she left to run for County Commissioner.[1]

In 1998 Mary Jo Kilroy, was chairman of the Columbus Ohio branch of the extreme left National Lawyers Guild[2].

Her husband, labor union lawyer Robert Handelman, is still a member of the National Lawyers Guild.

In the 1990s Mary Jo Kilroy was a journalist and editor of the Columbus Ohio based radical journal The Free Press[3];

Editor Mary Jo Kilroy had the keenest sense of a good news story. While she was editor, the Free Press won the Jack T. McKowan award from the OSU school of journalism for a string of news breaking stories that appeared in the Free Press. These included publishing the police report that documented Buck Reinhardt’s molestation of his babysitter; the expose’ on the true, but undisclosed, drop-out rates in Columbus schools; and the lawn poisoning practices of the Chemlawn Corporation.

Kilroy makes it clear that she is promoting leftist views and is working for "real change".

When Fitrakis began co-publishing and editing The Free Press in 1992, his co-publisher was Mary Jo Kilroy[5].

Fitrakis has claimed that Kilroy was too moderate[6];

In fact, Kilroy was too cautious for his liking, which reportedly led to their falling out and her departure from the paper in 1995, when she was serving on the Columbus Board of Education.

Socialist support in School Board campaign 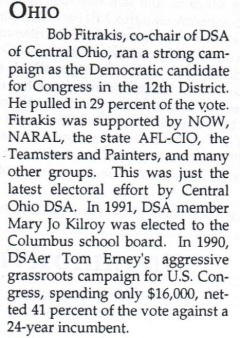 In 1991, Mary Jo Kilroy was elected to the Columbus Ohio School Board. At the time she was a member of Democratic Socialists of America.[8]

Mary Jo Kilroy was also named as a Democratic Socialists of America member in Democratic Left, July/August 1992, page 11, as part of a report on a D.S.A. National board meeting in Washington D.C.

The text indicates that Kilroy actually attended this high level D.S.A. meeting, which involved discussions on electoral organizing, strategies and tactics. Other attendees included Bob Fitrakis, a "DSAer" and Democratic Party Congressional candidate in Ohio, Paul Pinsky, a representative of the New Party and Howard Croft from the D.S.A. National Political Committee.

The Center for Democratic Values, the think-tank project of Democratic Socialists of America, held its first national conference, "Arguing with the Right," November 6-7 1997 at the Clarion Hotel Columbus Ohio, in conjunction with the DSA national convention[9].

The conference will include historical and analytical sessions, plus skills workshops for contesting the Right's current dominance of American political discussion.

1:30 Issue Workshops: The Right's Key Ideas and the Left's Responses

B. Arguing for Public Schools: Mary Jean Collins and Mary Jo Kilroy (Columbus Board of Education)[10].

Working with Jobs with Justice

On Friday, May 16, 2003, Columbus Jobs with Justice participated in one of Columbus' first workers' rights delegations. A group of local labor, religious and community members (including County Commissioner Mary Jo Kilroy, representatives from JwJ, the Central Labor Council, the Catholic Diocese, and a number of labor organizations) visited the corporate offices of the Kroger Corporation to ask for a visit with the president and to present a large signed poster demonstrating community support for truck drivers of Teamsters Local 413, who are in danger of losing their jobs. Kroger, a union shop where cashiers and others are represented by the UFCW, is considering giving the trucking contract to a non-unionized, low-paid owner-operator trucking firm in Texas[11].

Trade was also an issue in the narrow loss of Mary Jo Kilroy to Deborah Pryce. Local DSAers worked in both the Brown and Kilroy campaigns.

Frank summarized DSA PAC work around Sanders. Nine house parties raised just over $30,000, and there will be five more. Nearly a thousand people have contributed either to DSA PAC or to Sanders. David Green told about Nancy Skinner’s house race in Michigan and Simone Morgen told about Mary Jo Kilroy’s house race in Ohio. DSA members in both places are interested and involved.

Mary Jo Kilroy of Columbus will be the first Democrat to represent any part of Franklin County in Congress since 1982, and the first to represent her 15th Congressional District since the 1960s.

Democratic Socialists of America leader and long time The Free Press Kilroy colleague Robert Fitrakis has alleged that Mary Jo Kilroy was robbed of victory in the 2006 election[15];

In 2006, Kilroy barely lost to incumbent Deb Pryce as thousands of contested provisional ballots went uncounted. Under then-Secretary Blackwell, voters in Democratic precincts were routinely challenged on minor details and forced to cast provisional ballots to allegedly be counted at a later time.

But thousands were merely pitched in the trash or otherwise negated. Some 16,000 provisionals and 93,000 machine-rejected ballots have never been counted from a 2004 election decided by an official margin of less than 119,000 votes. Independent observers believe a fair vote count would have given Kilroy her House seat in 2006. Also in that election, e-voting machines had statistically unlikely high rates of undervotes in central city polls.

In Columbus, Ohio, DSA members campaigned for both Obama and congressional candidate Mary Jo Kilroy, who, after a suspenseful count of provisional ballots was declared the winner in December, raising the Democrats’ majority in the House to 257.

Join us this Thursday, April 1, for a rally with two of our greatest champions of health care reform: Senator Sherrod Brown and Congresswoman Mary Jo Kilroy!

Kilroy received $5000 in lobbying funds from Planned Parenthood in 2008.

Kilroy has been and is an EMILY's List-supported candidate.

The Council for a Livable World, founded in 1962 by long-time socialist activist and alleged Soviet agent, Leo Szilard, is a non-profit advocacy organization that seeks to "reduce the danger of nuclear weapons and increase national security", primarily through supporting progressive, congressional candidates who support their policies. The Council supported Mary Jo Kilroy in her successful 2008 House of Representatives run as candidate for Ohio.[19] She has also been previously supported by the Council.[20]

The Council also supported Kilroy in her 2010 Congressional election campaign.[21]

On Dec. 22, 2009, thirty-three U.S. Representatives wrote to Secretary of State Hillary Clinton, calling on her to request that the Israeli Government end the ban on student travel from Gaza to the West Bank. Mary Jo Kilroy was one of the signatories of the letter.[22] The entire letter together with a complete list of signatories can be read by clicking here.

On Jan. 27, 2010, U.S. Representatives Keith Ellison and Jim McDermott led 52 other members of Congress in signing a letter addressed to President Barack Obama, calling for him to use diplomatic pressure to resolve the blockade affecting Gaza. Mary Jo Kilroy was one of the signatories of the letter. [23] The entire letter together with a complete list of signatories can be read by clicking here. 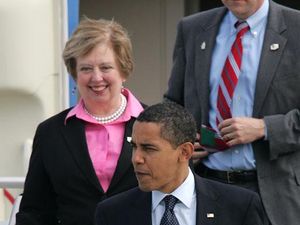 It was stated that the mission "will meet with Israeli government and opposition leaders as well as key regional leaders, including Jordanian King Abdullah II and Palestinian National Authority Prime Minister Salam Fayyad. The delegation will travel widely in Israel, the Palestinian Territories, and Jordan taking a close look at the situation on the ground through the eyes of policy makers and civil society leaders."[24]

JStreet is a Jewish organization that, according to its website, "was founded to change the dynamics of American politics and policy on Israel and the Middle East".[25]

The mission of 21st Century Democrats is to build a "farm team" of progressive populists who will be the future leaders of the Democratic Party.

In each election cycle, we endorse a diverse array of candidates who exemplify our values and show unusual promise to advance our progressive goals. We invest in some of the most competitive races as well as in some of the most challenging – those in which the candidates are outstanding but the traditional Democratic supporters are most reticent. We back candidates in primaries as well as general election races, and we focus the bulk of our resources on electing challengers and protecting vulnerable incumbents.[26]

Kilroy was one of 17 key progressives endorsed by 21st Century Democrats in the 2010 election cycle. [27]

Kilroy was also supported in 2008.

The following have worked as staff members for Mary Jo Kilroy:[30]