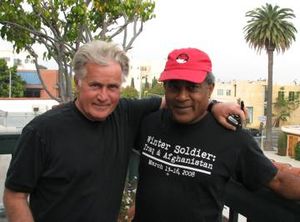 Template:TOCnestleft Martin Sheen is a well known actor and activist.

In 1994 Martin Sheen was an initiator of the International Peace for Cuba Appeal, an affiliate of the Workers World Party dominated International Action Center.

Letter to Presidents Clinton and Samper

In 1994 a letter was sent to US President Bill Clinton, and Colombian President Samper, apparently from the Colombian Support Network.

It called on the US to "cut off all aid to Colombia until the violence has ended", and called for the appointment of a UN Rapporteur on human rights in Colombia.

Open Letter to the Colombian People, Press and Government, Aug. 1996

"Stop the Bloodshed in Uraba, Due Process for Jose Antonio Lopez, Nelson Campo and others, and an End to Faceless Justice and Political Repression".

We, the undersigned, are North Americans and others who are deeply disturbed by the human rights situation in Colombia.

Massacres, disappearances and torture happen continually in the anguished region of Uraba. We can not understand how paramilitary groups operate so freely in this militarized region where the Colombian army is present in massive numbers, and which does not perform its constitutional function of defending the civilian population. And we can not understand why the regional paramilitary leader is not apprehended and brought to justice for his crimes against humanity.

We call upon all armed parties -- paramilitary units, guerrillas, army, police, urban militias and commandos -- to immediately cease all attacks upon both the civilian population and upon each other. Justice, peace and a fruitful life is never found through murder, torture, kidnapping and intimidation.

Martin Sheen, signed the letter, from the Colombia Support Network .[4]

In 1997 the United Farm Workers, with the support and participation of the AFL-CIO, mobilized over 30,000 farmworkers and supporters in the Strawberry Capitol of the World: Watsonville, California. The march was lead by UFW leaders, Jesse Jackson, John Sweeney, Ron Carey of the Teamsters Union, Martin Sheen, and a "host of dignitaries". A particularly strong contingent came from the UCLA MeCha which mobilized close to 100 Chicano students.

Dolores Huerta, UFW vice president, an Honorary Chair of DSA , and a supporter of the DSA Latino Commission, welcomed the marchers.

Arturo Rodriguez, the new President of the United Farmworkers and heir to the tradition of Cesar Chavez, delivered his speech in English and in Spanish. John Sweeney and Richard Trumka addressed the crowd, with translation provided by Louis Valdez and others. DSA contingents came from Sacramento, Los Angeles, and San Diego as well as the Latino Commission. [5]

Thousands of people from across Southern California joined the 4th Annual Cesar E. Chavez Walk in East Los Angeles on Saturday, April 6, 2002 --marking the ninth anniversary of the legendary farm worker and civil rights leader's death and the 40th anniversary of the United Farm Workers.

After a brief welcome by emcees Sid Garcia (ABC7) and Nancy Agosto (KMEX-TV), participants traveled a five-kilometer route through the neighborhood before returning for free music and entertainment.

October 27, (circa 2007) in Los Angeles, nearly 20,000 people marched through downtown to the federal building for a mass rally and Die-In.

After the march, almost everyone present participated in a mass symbolic Die-In. Ian Thompson of the ANSWER Coalition introduced the Die-In while masses of people lay down. Thundering sound effects of air raids and bombs exploding punctuated the action, followed by a solemn minute of silence for the Iraqis and U.S. soldiers killed in the war. As protesters rose up after the Die-In, all chanted "Stop the war!" Preston Wood of ANSWER and Greg Akili of African Americans Against the War spoke about the cost of war on people in the United States, urging everyone present to become organizers in the anti-war movement. Muna Coobtee of the National Council of Arab Americans spoke about the dire conditions facing Iraqis due to the imperialist occupation.

Other speakers included actors Martin Sheen ("The West Wing"), Mike Farrell ("MASH") and Mark Ruffalo ("Zodiac"). ANSWER initiated the protest, which was organized by the Oct. 27 Stop the War Coalition, a broad array of progressive, anti-war and social justice organizations.[8]

In 2009 Martin Sheen an actor was listed as an Endorsor of the Communist Party USA initiated Cesar E. Chavez National Holiday organization[9]

We, Actors and Artists United for the Freedom of the Cuban 5, want to extend our deepest gratitude for your recent visit to Cuba, as well as our support for your statements promoting improved relations between our countries.

Your call for the release of Gerardo Hernandez Nordelo, Antonio Guerrero Rodriguez, Fernando Gonzalez Llort, Ramon Labanino Salazar, and Rene Gonzalez Sehwerert, known as the Cuban 5, and your willingness to visit with their family members in Cuba mean a great deal to all involved. We strongly agree that there is no reason to keep these men, who were simply trying to protect their country from terrorism, imprisoned any longer...

Further, we enthusiastically support you in having subsequent discussions with President Obama and Secretary of State Hillary Clinton and hope you will call for urgent action on their part to make right this unjust situation.

Again, we thank you and look forward to the possibility of improved relations and future visits to Cuba. 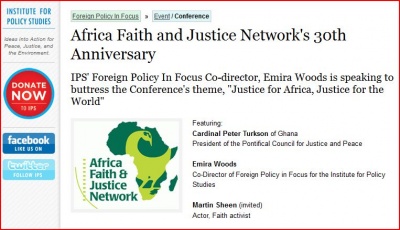 In early 2013, mainly Democratic Socialists of America aligned activists, together with many elected officials across the United States came together to urge President Barack Obama to award posthumously the Presidential Medal of Freedom to the legendary organizer, Fred Ross, Sr.. The Saul Alinsky trained radical was the first to organize people through house meetings, a mentor to both Cesar Chavez and DSAer Dolores Huerta, and a pioneer in Latino voter outreach since 1949 when he helped elect Communist Party USA affiliate Ed Roybal as Los Angeles’s first Latino council member, "Ross’ influence on social change movements remains strong two decades after his death in 1992".