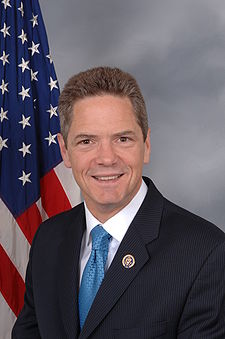 Mark Schauer (born in Howell, Livingston County, MI, October 2, 1961) was a Democratic member of the United States House of Representatives, representing the 7th district of Michigan.

In 2014 he was a candidate for Governor of Michigan.

Schauer received $6000 in lobbying funds from Planned Parenthood in 2008.

Having been rebuffed in our offers of assistance to progressive Congressional candidates Gary Peters (9th district) and Mark Schauer (7th district)—both of whom were afraid of being red-baited--Detroit DSA focused instead on local and state races.

The mission of 21st Century Democrats is to build a "farm team" of progressive populists who will be the future leaders of the Democratic Party.

In each election cycle, we endorse a diverse array of candidates who exemplify our values and show unusual promise to advance our progressive goals. We invest in some of the most competitive races as well as in some of the most challenging – those in which the candidates are outstanding but the traditional Democratic supporters are most reticent. We back candidates in primaries as well as general election races, and we focus the bulk of our resources on electing challengers and protecting vulnerable incumbents.[5]

Schauer was one of 71 key progressives endorsed by 21st Century Democrats in the 2008 election cycle, second round. [6]

He was also supported during his 2000 State house race,

As at July 7, 2008, Mark Schauer was a co-sponsor of State Senator Hansen Clarke's Senate Bill 1306, "which would stop all mortgage foreclosures and evictions for two years." The bill is being supported by the Workers World Party-front, Moratorium NOW!.[7]

To the 500 students attending the "Michigan Moving Forward" rally at the University of Michigan's Rackham Auditorium, September 2010, Representative John Dingell put the question directly. "Republicans talk about taking the country back and I want to ask, back to what? Bush? Hoover? 1900? Louis XIII?"

With the audience cheering loudly Dingell answered, "This country is going to keep moving forward whether the Republicans like it or not."

Schauer was pitted against the "far-right former incumbent" of the district, Tim Walberg. To "hisses, boos, and looks of disbelief, Schauer said the former congressman was the only member of the Educational Committee to vote against Head Start. He also voted against Pell grants".

Walberg wants to do away with Social Security and has said, "It's not worth the paper it's printed on." Those scare tactics were not going anywhere with this young crowd.

"Our forefathers felt we have an obligation to one another," Schauer continued. "The Republican Party believes it's every person for themselves. Elections matter. I'm asking you to fight for it."

After the rally Garrett Arwa, Michigan State Field Director of Organizing for America said, "We know these races are going to be close. Those students in the room, every single one that votes, every one that knocks on the door, gets their friends to vote, literally could make the difference."[8]

As at Feb. 1, 2011, Senator Mark Schauer, Battle Creek was listed as an endorser and ongoing supporter of MichUHCAN's Health Care Security Campaign Coalition.[9] The Michigan Universal Health Care Access Network is a state-wide network that promotes comprehensive health care for all and improved health outcomes by addressing the social determinants of health through education, strategy development and advocacy. The leadership of MichUHCAN is heavily dominated by members of Democratic Socialists of America.[10] 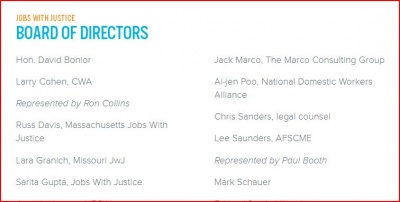 In 2013 Mark Schauer served on the board of Democratic Socialists of America dominated Jobs with Justice.[11]

The Alliance for Retired Americans Political Action Fund endorsed Mark Schauer in his 2014 run for Governor .[12] 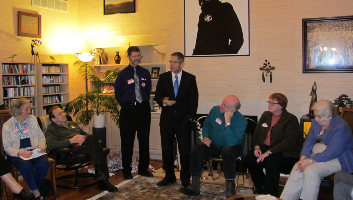 Greater Detroit Democratic Socialists of America held its first in a series of proposed fundraising house parties for Democratic gubernatorial candidate Mark Schauer on November 13, 2013 at the home of Chris Talwar and Gillian Talwar. The party raised over $5000 from 48 donors.

The guests of honor at the event were State Representative Vicki Barnett and Metropolitan Detroit AFL-CIO President Chris Michalakis.

Mark Schauer shares DSA’s values. He has made raising the state minimum wage the centerpiece of his campaign. He is the son of a teacher who supports restoring funding for public education as well as restoring collective bargaining rights for teachers. He believes in universal health care. In fact, his courageous vote in favor of the Affordable Care Act in 2010 was probably responsible for his losing his Congressional seat in 2012.

Detroit DSA proposed to organize a series of fundraising house parties for Schauer in 2013-2014 in Oakland, Wayne, Macomb, and Washtenaw Counties.

The next house party was scheduled for the home of Detroit DSA Executive Board member Ken Jenkins. [13]

The following have worked as staff members for Mark Schauer:[14]