Maria Echaveste is a lecturer in residence at Boalt Hall at the University of California, Berkeley. She is married to Chris Edley, Jr.

Following graduation from Boalt, Echaveste specialized in corporate litigation at the former Los Angeles firm Wyman Bautzer and at Rosenman & Colin in New York. After leaving the White House, she founded the Nueva Vista Group, a consulting firm based in Washington, D.C., that works with nonprofit organizations, associations and corporations on such issues as immigration, health care, telecommunications, labor and finances[1].

Our candidacy is based on the belief that the ASSU Council of Presidents should not restrict its activities to the area of student services but should also deal with student involvement in educational and social change, and that the Council should be responsive to the interests of all students, including women, minority, and graduate students.

Chris Baron's experience as chairwoman of the SWOPSI Board gives her the insight necessary to deal effectively with these issues. As a Daily editorial stated, "her work on the SWOPSI Policy Board has been especially valuable in keeping that important program going." Curriculum Gaps We propose to establish, in conjunction with SCIRE, a Task Force on Curriculum to deal with the need for alternative introductory courses and curriculum gaps.

We support NorCal PIRG's (Public Interest Research Group) effort to provide students with valuable information on consumer issues while engaging them in meaningful research. Jack Handy has been Chairman of NorCal PIRG and will work to develop the program to its full potential at Stanford.

We have been attacked for representing "special interests" because of our concern for minority affairs. We believe, however, that all students benefit from a culturally, ethnically and sexually diverse university and that the university and its students should be committed to racial and sexual equality.Boo Bacon as editor of The Real News and Maria Echaveste as co-chairwoman of MEChA have actively pursued these goals. Both have also been active in the ASSU Senate, with Maria serving as vice-chairwoman .[2]

May 1975, Several groups are planning an alternate commencement ceremony on graduation day as a protest against commencement speaker Daniel Patrick Moynihan. Currently a Harvard professor of government, Moynihan has attracted criticism from some campus groups over alleged poor scholarship in his works on the problems of black Americans. Charles Ogletree, graduate student in political science and former ASSU vice president, said alternate commencement will be on Sunday, June 15. Ogletree said "its main purpose will be to provide an alternate ceremony for black seniors, black parents and [all J those receiving M.A.'s and Ph.D.'s." Ogletree stressed that the special ceremony is "open to any graduating student who doesn't want to attend the University's commencement."

MEChA spokeswoman Maria Echaveste said chicano faculty, staff and students passed a resolution in early April supporting the black students. "We felt that inviting Moynihan to give the commencement speech was a serious insult." Echaveste said that "we will help them in any way the blacks see fit." * "We do support the black community," said Sharon Malotte, spokeswoman for the Stanford American Indian Organization, but Malotte did not know of the alternate commencement proposal. "We will help in a campaign if asked," she said. Friday the Stanford Asian Students Coordinating Committee (SASCC) voted in favor of a position paper opposing Moynihan's speaking at graduation. The paper stated that "Moynihan's selection is the latest episode in this administration's callous regard for ethnics of color. The action is not only an insult to the sensibilities of ethnic parents and students, but an exercise in abuse on the part of the University's public relations machine." SASCC stated that it regards "the Moynihan invitation as an indication of Stanford's waning commitment to all ethnics of color," and has urged "concerned members of the Stanford community to boycott the commencement exercises at which Moynihan will speak."[3]

May 13 1975, about 350 demonstrators sat in the lobby of the Old Union for over an hour, protesting a University research contract with Iran and changes in financial aid programs for minority students. About 150 of the protestors, including many Iranians, chanted and marched in a picket line outside the building. They later joined the others in the lobby. Inside the building, the relaxed crowd sang protest songs, listened to speeches, and cheered at the arrival of a "lemonade brigade."

Earlier, at least 600 persons, mostly students, marched across White Plaza and rallied outside the Center for Research and Development in Teaching (SCRDT), in which the Board of Trustees was holding its monthly meeting. Co-Sponsors The protest was co-sponsored by three groups: the Alliance for Radical Change (ARC), the Iranian Students Association (ISA) and the Revolutionary Student Brigade (RSB). Other campus groups, including Students for Equity, endorsed the rally. Through University officials ARC issued a statement asking the trustees to terminate a three-year, $1 million contract to develop a satellite system for National Iranian Radio Television, and to restore "cuts made in minority student financial aid."

The demands were presented to the trustees' Committee on Academic Affairs by President Richard Lyman. The trustees asked Lyman some questions about the issues but took no action, said Robert Rosenzweig, vice president for public affairs. Rosenzweig said the trustees probably did not discuss student demands or the protest at their afternoon meeting "because it wasn't on their agenda." No Response The trustees' failure to respond to the demands influenced the decision to march on the Old Union, an ARC source said. A "Tactical Committee" apparently planned and directed the demonstration. "The Committee is made up of three people from ARC and two people from each of the other [co-sponsoring) groups," the ARC source said. Seth Foldy, an undergraduate who functioned as the Tactical Committee's press secretary, said its official policy was "to avoid confrontation with police and to avoid arrests." Various factors, including the size and composition of the crowd, influenced the Tactical Committee's decisions about which of several contingency plans to use, the ARC source said.

ASSU Sen. Maria Echaveste of Students for Equity said, "The organizers of the rally put the financial aids issue on the bottom. The Iran contract was the main issue." However, another speaker, Michael Kieschnick of ARC, said the issues are related because both show the University's interest in "education for profits, not for people." At 1 p.m. the crowd formed a column and marched in the direction of the SCRDT building. They were met by 120 Iranian students from Southern California and San Jose, in the middle of a march from Los Angeles to San Francisco to protest the Shah's upcoming visit to the U.S. Members of the ASSU Council of Presidents escorted some trustees to the building. "The Council of Presidents took no part in planning the demonstration," Foldy said. Once all the trustees had entered the building, the marchers convened on a nearby lawn, where speakers read prepared statements and compard the Stanford protest to others around the nation.

On The Move At about 2 p.m. ARC member Jan Jacobson instructed the crowd to "stay together and march through the campus." Minutes later, the crowd reached the Old Union Courtyard. Information and transcript windows were closed when protestors entered the Old Union lobby. "I believe it was Bob Houghton's decision based on normal procedure when large numbers of people enter the building," Registrar Sally Mahoney said. Houghton, the associate registrar, said it was Mahoney's decision. Mahoney said the protest "has shut us down, at least for now." But business as usual prevailed on the upper floors of the building, observers said. Rosenzweig, standing with other administrators in the doorway, said he did not consider the protest a "sit-in" because the building was still open for business.

Stanford Public Safety Officer Nick Bruno arrived at the Old Union shortly ahead of the bulk of the crowd and ordered personnel to close windows and doors. Three plainclothes personnel from the Santa Clara County sheriff's office circulated freely through the crowd. Lt. Robert E. Lees said all three officers were from the sheriff's Community Relations Office and were "just observing." Lees said he had known about the demonstration for several days and "couldn't recall" whether Stanford officials had requested his presence on campus. Although ARC spokesman stressed a desire to avoid confrontation with police, some demonstrators harrassed Bruno outside the building when he attempted to lock doors to the Student Accounting Office. They jeered at him and flashed a mirror in his face. Although there was no official response to the demands yesterday, ARC member Gerald Koblentz said Vice Provost for Research William F. Massy told him that the University Committee on Research might meet "sometime next week" to reconsider research contract guidelines adopted in 1971. [4] 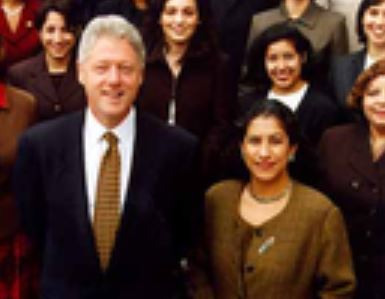 From 1998 to 2001, Maria Echaveste served as assistant to the president and deputy chief of staff to President Bill Clinton. In this capacity, Echaveste managed domestic policy initiatives that focused on education, civil rights, immigration and bankruptcy reform. She also developed communications, legislative and public outreach strategies. In another area, she coordinated relief efforts within the White House for foreign and domestic disasters, and specialized in international issues related to Latin America. She was previously the administrator of the labor department's Wage and Hour Division from 1993 to 1997[5].

In 2005 Maria Echaveste served as a fellow[6] of Center for American Progress.

The statewide tour started on Saturday morning in the City of Fresno at the home of David L. Schecter, Associate Professor of California State University at Fresno, and special guests included Fresno Councilmember Cynthia Sterling. The tour continued in Sacramento, attending a party hosted by campaign volunteers and supporters at the home of Karen Thomas and John McFadden. Early evening, Dolores was in the Bay Area attending the Richmond Holiday Party at the home of Contra Costa Supervisor John Gioia and Jennifer Peck with guests Pinole Councilmember Stephen Tilton, Berkeley Councilmember Kriss Worthington, Oakland Councilmember Jean Quan and Mayor of San Leandro Anthony B. Santos.

The first day of the tour concluded in San Francisco at the home of Miguel Bustos and Alex Rivera. In attendance were Supervisor Jose Sandoval and Maria Echaveste, former Deputy Chief of Staff to President Bill Clinton.[7]

In 2009 Maria Echaveste was listed as a member of the Board of Directors of The American Prospect.[9]

In early 2013, mainly Democratic Socialists of America aligned activists, together with many elected officials across the United States came together to urge President Barack Obama to award posthumously the Presidential Medal of Freedom to the legendary organizer, Fred Ross, Sr.. The Saul Alinsky trained radical was the first to organize people through house meetings, a mentor to both Cesar Chavez and DSAer Dolores Huerta, and a pioneer in Latino voter outreach since 1949 when he helped elect Communist Party USA affiliate Ed Roybal as Los Angeles’s first Latino council member, "Ross’ influence on social change movements remains strong two decades after his death in 1992".

Breakfast with the Phillips'

Inclusv Advisory Board members, as of May 12, 2018 included Maria Echaveste.

New World Foundation leads by example. Our Board is made up of social justice practitioners, past and present grantees, movement thinkers, and leaders.[12]