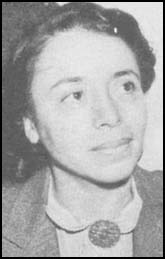 In 2018 South Carolina Progressive Network published a booklet, HISTORY DENIED: Recovering South Carolina's Stolen Past by Becci Robbins. Its content is a substantive introduction to the Southern Negro Youth Congress (SNYC) and the vanguard radical labor organizing among interracial youth in the severely segregated South between 1937 and 1949. Specifically, this tells of a landmark Congress convened in Columbia, South Carolina in October of 1946.

This event had in active participation such Freedom Movement notables as local South Carolina youth leaders in addition to Paul Robeson, Herbert Aptheker, Dorothy Burnham and Louis Burnham, Esther Jackson and James Jackson, Louise Patterson, Sallye Davis, Jack O'Dell, South Carolina's Modjeska Simkins and the Congress' Keynote Speaker, Dr. W.E.B. DuBois, who gave a speech, BEHOLD THE LAND, which "has been a must read' for all young activists ever since".[1]

The Campaign for One Million Voices to Expel South Africa From the UN was a Communist Party USA front created in about 1974.[2] The front was launched to speak on South Africa and its membership in the United Nations. They issued an undated brochure entitled "We Who Support Human Rights... DEMAND the expulsion of South Africa from the UN!" The brochure was printed by the CPUSA print shop "Prompt Press", printing bug number 209.

On April 12, 1948, Louise Thompson Patterson was listed as a member of the Communist Party USA dominated Citizens' Committee to Aid Packing-House Workers which was based in Chicago, Illinois.[3]

The Council on African Affairs, Inc.

The Council on African Affairs, Inc. officers circa 1950;[4]

On April 28, 1966 Peter Hawley, Chairman; Harry Epstein, Treasurer and Louise Thompson, Secretary were members of the Arrangement Committee for the Herbert Aptheker Testimonial Dinner. The dinner was held on the occasion of Herbert Aptheker's 50th birthday, the publication of his 20th book, and the 2nd anniversary of the American Institute for Marxist Studies. It was held in the Sutton Ballroom, The New York Hilton, Avenue of the Americas, 53rd to 54th Street, New York City. Most speakers, organizers and sponsors were known members or supporters of the Communist Party USA.[5]

In Chicago on October 27, 1971 - The Presidential Ballroom of the Midland Hotel was packed with more than 400 people last Friday to mark the 8Oth birthday of Wiliam L.Patterson, the man who rocked the world with his charge of genocide against the U.S. imperialists. Spokesmen for the committee sponsoring the banquet told the Daily World that many who had delayed in getting reservations had to be turned away. Veterans of the working class movement said they could not remember an occasion bringing together such a broad spectrum of workers, trade unionists and professionals, in a tribute to a Communist leader.[6]