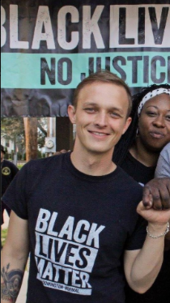 Louis Goseland is a community organizer and strategist who moved to Bloomington in 2015. He is currently an organizer with the Illinois Alliance for Retired Americans, serves as secretary on the board of directors for ONE People's Campaign, and volunteers with Black Lives Matter Bloomington-Normal and Bloomington-Normal Democratic Socialists of America Chapter.

Since 2006, Louis has worked as a professional community organizer, campaign strategist, and international consultant. He has collaborated with faith-based communities, labor unions, neighborhood organizations, and student groups throughout the United States and Europe on an array of social justice issues. His commitment to transformative community organizing is rooted in his belief in the power of collective action to not only change systems, but to create the arena for demonstrating the dignity and worth inherent in all people.[1]

ONE People's Campaign Board of Directors 2020.

According to a report from Wichita Democratic Socialists of America member Stuart Elliott on October 2, 2011 there was a lively group of up to fifty at Occupy Wichita . [3]

We circulated the Conyers petition, getting about 30 signatures. We did run into one former member of Wichita DSOC who is very interested in getting involved again!