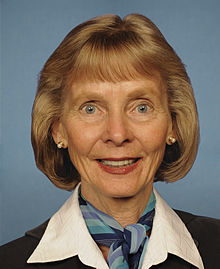 Lois Capps was a Democratic member of the United States House of Representatives, representing the 23rd district of California.

Congresswoman Lois Capps was sworn in as a Freshman Member of the 105th Congress on March 17, 1998, succeeding her late husband, Congressman Walter Capps. She was the Representative of California’s 22nd District from 1998 to 2002.

Since January, 2003, Capps has served as the Representative of the 23rd District. Her district includes portions of San Luis Obispo, Santa Barbara, and Ventura Counties.[1]

In April 2015, Rep. Lois Capps, D-Santa Barbara, announced early this month that she would not seek re-election after nine terms in Congress.

Capps was married to Walter Capps for 37 years.[2]

2006 letter to Condoleezza Rice on Colombia

Alleged Colombian Army killings prompted Fellowship of Reconciliation to work with Representative Sam Farr to forge a response that would impact the 17th Brigade, the unit allegedly responsible for the violence against San José de Apartadó and communities throughout northwestern Colombia.

As a result, Reps. Sam Farr and Jim McGovern, wrote a letter to their colleagues in Congress urging them to join in calling on Secretary Condoleezza Rice to cut funding for the Colombian military.

We applaud the decision, noted in your certification letter of August 2005, that the US "will not consider providing assistance to the 17th Brigade until all significant human rights allegations involving the unit have been credibly addressed." Because the Brigade is a component of the Colombian Armed Forces' command structure and has been implicated in the above referenced human rights violations, we implore you to abide by both the letter of the law and the spirit of the law by withholding human rights certification for Colombia until the following conditions are met:

The Council for a Livable World, founded in 1962 by long-time socialist activist and alleged Soviet agent, Leo Szilard, is a non-profit advocacy organization that seeks to "reduce the danger of nuclear weapons and increase national security", primarily through supporting progressive, congressional candidates who support their policies. The Council supported Lois Capps in her successful House of Representatives run as candidate for California.[4]

2012 Council for a Livable World House Victories were;

The Council said of Capps;

Rep. Lois Capps is fighting for her seat in California’s 23rd Congressional District. Due to California’s new redistricting, this seat is a battleground and Capps has a fight ahead of her. Council for a Livable World is confident that this progressive candidates who, has earned100% on Council’s voting scorecard for the last eight years, will fight through the battleground and come out on top once again. [6]

The board of the Santa Barbara County Action Network Action Fund has voted for a number of endorsements in local races to be decided in the June 5 election.

The board is particularly proud to endorse Joyce Howerton, candidate for the Board of Supervisors in the Fourth District.

“Joyce was a founder of SBCAN (our sister organization) and has served as its director for the past 18 months,” Action Fund board chair Dick Flacks said. “Her record as a staunch advocate for the environment, for working families and for transparent government extends over decades as a leader and mayor of Lompoc. Her election to the board would be a transformative event in the history of this county.”

The board urges the election of Hannah-Beth Jackson for State Senate.

SBCANAF endorses the following candidates for re-election to the county Board of Supervisors: Salud Carbajal for the First District and Doreen Farr for the Third District.

The Action Fund endorses Das Williams for re-election to the Assembly and Rep. Lois Capps, D-Santa Barbara, for Congress.

The SBCAN Action Fund will be urging its hundreds of supporters to contribute their time, energy and dollars to these campaigns.[7] 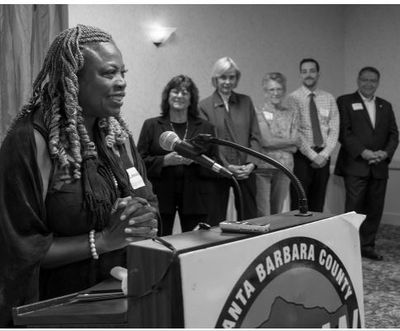 Lawanda Lyons-Pruitt, on left, accepts the Social Justice Award from Santa Barbara County Action Network during the North County “Looking Forward” Awards Dinner in Santa Maria on June 7, 2015, while dignitaries wait to present their own awards.

Capps has been supported by EMILY's List during her campaigning.

The fundraiser was at the Stanley & Betty Sheinbaum residence in Brentwood. Both Sheinbaums have been members of Democratic Socialists of America.[9]

In 2012, “JStreetPAC’s proven track record of success speaks to the wellspring of support that exists for candidates who stand up for pro-Israel, pro-peace policies. Candidates like Sherrod Brown, Tammy Baldwin, and Lois Capps who took our endorsement and share our positions did come under attack and still won convincingly,” sad Jeremy Ben-Ami.[11]

On Dec. 22, 2009, thirty-three U.S. Representatives wrote to Secretary of State Hillary Clinton, calling on her to request that the Israeli Government end the ban on student travel from Gaza to the West Bank. Lois Capps was one of the signatories of the letter.[15] The entire letter together with a complete list of signatories can be read by clicking here.

On Jan. 27, 2010, U.S. Representatives Keith Ellison and Jim McDermott led 52 other members of Congress in signing a letter addressed to President Barack Obama, calling for him to use diplomatic pressure to resolve the blockade affecting Gaza. Lois Capps was one of the signatories of the letter. [16] The entire letter together with a complete list of signatories can be read by clicking here.

It was stated that the mission "will meet with Israeli government and opposition leaders as well as key regional leaders, including Jordanian King Abdullah II and Palestinian National Authority Prime Minister Salam Fayyad. The delegation will travel widely in Israel, the Palestinian Territories, and Jordan taking a close look at the situation on the ground through the eyes of policy makers and civil society leaders."[17]

JStreet is a Jewish organization that, according to its website, "was founded to change the dynamics of American politics and policy on Israel and the Middle East".[18]

Boehner vowed to overturn the policy, complaining that it was a violation of religious freedom because its coverage includes schools and hospitals with religious affiliation. Other Republicans saw this as a political opening, and argued that this was a sensitive issue of "religious liberty."

Schakowsky, along with Reps. Rosa DeLauro, D-Conn., Lois Capps, D-Calif., and Gwen Moore, D-Wis., said at the press conference they supported the president's policy, explaining that it strikes a balance between religious and individual freedom.

As for religiously-connected hospitals and schools, she explained, "If they want to be part of the business world, then they have to follow the same rules as other businesses."

Capps and DeLauro outlined some of the benefits of the birth control decision, noting that it was based on scientific evidence, decreased infant mortality and unintended pregnancy, and would reduce the long-standing gender discrimination issues that women in health care face.

"The idea that birth control could be controversial in 2012 is outrageous," Schakowsky remarked. "Women's health care should not depend on who the boss is." Furthermore, she predicts a backlash among women if Republicans continue to attack this policy.

"It would be at their peril if they try to undo this," she concluded.[19] 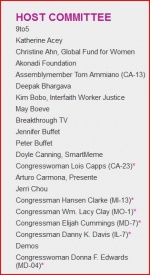 Leading with Love was an event to celebrate 5 years of the Marxist led National Domestic Workers Alliance. It was held in Washington DC, DC, November 14, 2012.

Due to your action/emails/phone calls we have 59 signatures from House representatives urging President Obama to support travel to Cuba by granting general licenses for ALL current categories of travel.

By eliminating the laborious license application process, especially for people-to-people groups, that is managed by the Office of Foreign Assets Control (OFAC), the majority of the bureaucratic red tape that holds up licensable travel to Cuba would disappear and actually facilitate what the President wanted to see in 2011, liberalized travel regulations.

In 2013 Progressive Democrats of America assigned activists to deliver their material to almost every US Congressman and Senator, Lois Hamilton was assigned as the contact for Rep. Capps.[22] 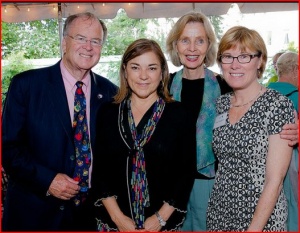 In the 113th Congress, 50 members of the House of Representatives belonged to the New Democrat Coalition, including:[25]

“CAIR is the national forefront of fostering a positive understanding of American Muslims and works tirelessly to foster interfaith understanding through education and dialogue.”- Rep. Lois Capps (D-Calif.) (September 2014).[27] 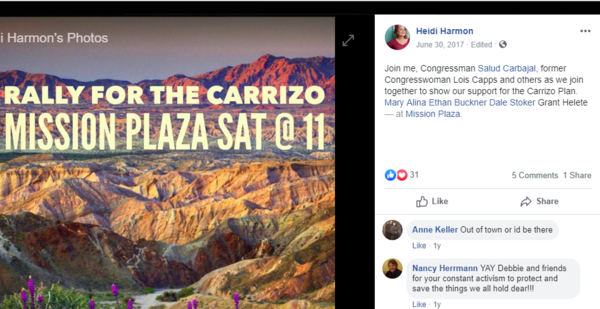 Join me, Congressman Salud Carbajal, former Congresswoman Lois Capps and others as we join together to show our support for the Carrizo Plan. Mary Alina, Ethan Buckner, Dale Stoker, Grant Helete.