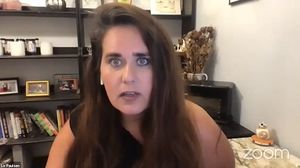 Liz Butler (a.k.a. Liz Paulson) is a long time activist and an organizer for Shut Down DC and vice president of organizing and strategic allegiances for Friends of the Earth Action. She is also featured on the Movement Catalyst website.[1] 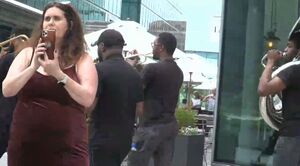 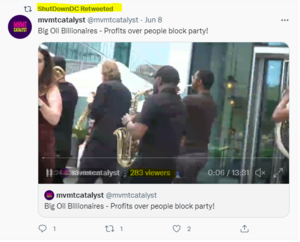 On June 8, 2022, Liz Butler was part of a Movement Catalyst action called "Big Oil Billionaires - Profits over people block party!"[2] Shut Down DC retweeted the event, which was viewed 283 times on Twitter[3] as of June 16, 2022.

Earth Day to May Day

Liz Butler was an organizer of the Shut Down DC initiative "Earth Day to May Day" in 2020. From their website:[4]

"Throughout the week of April 27th we'll take bold direct action online AND in person to shut down business as usual and create space for a healthier and more sustainable world. Each day of the week will focus on a theme to highlight the ways that the climate crisis threatens our communities and lifts up our opportunities to build resilient alternatives.​ 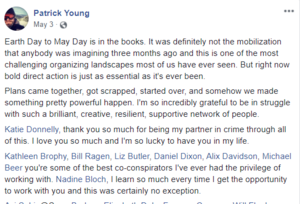 Fellow organizer Patrick Young wrote about the action on Facebook:[5]

"Earth Day to May Day is in the books. It was definitely not the mobilization that anybody was imagining three months ago and this is one of the most challenging organizing landscapes most of us have ever seen. But right now bold direct action is just as essential as it's ever been.

"Plans came together, got scrapped, started over, and somehow we made something pretty powerful happen. I'm so incredibly grateful to be in struggle with such a brilliant, creative, resilient, supportive network of people.

"Katie Donnelly, thank you so much for being my partner in crime through all of this. I love you so much and I'm so lucky to have you in my life.

"Kathleen Brophy, Bill Ragen, Liz Butler, Daniel Dixon, Alix Davidson, Michael Beer you're some of the best co-conspirators I've ever had the privilege of working with. Nadine Bloch, I learn so much every time I get the opportunity to work with you and this was certainly no exception.

"Avi S. Li, @Sara, Barbara Elizabeth Dale, Farzona Comnas, Will Flagle, @Rahsaan, @Nathan, Anna Dell'Amico, ya'll did so much to make sure that bikes, cars, trucks, and paint rollers were all moving when they needed to. Your work and commitment made all this happen and your energy and creativity made it beautiful.

"Helen Luryi the way you plugged into logistics and kept things on task (even when we really didn't want to be on task) was incredible and this scale of activity could not have happened without you.

"Laura Beth from the beginning, your design work tied this sprawling project together and made it into something coherent. And when the world changed those images told the story when our numbers in the streets couldn't.

"NeeNee Tay, April Renee Goggans, Makia Green, I am beyond grateful for the opportunity to be in struggle with Black Lives Matter DC and hope that we can continue to be in solidarity with the vital work that you do every single day.

"Hope Neyer, everything turned upside down on you when school closed and you headed back to Ohio... but you stayed plugged in and you were a key part of making all of this happen!

"Kaela Bamberger you bounced back from such a hard time and then jumped right back in to turning our muddled ideas about actions into a coherent narrative.

"Drew Hudson as always you came through from afar to fill in so many gaps and help us connect with the voices from the front lines.

"Mike Warburton and the crew from Sunrise Movement - DC Hub, ya'll did an incredible job of pivoting as the pandemic set in and still organizing a strong, rooted action.

"Danny Cendejas it was great to get a chance to start working with La ColectiVA and For Us, Not Amazon ... and I'm looking forward to throwing down with ya'll a whole lot more!

"Bring the City to a Standstill"

"The traffic shutdown is meant to send a particular message to D.C.'s powerful political elite, according to Liz Butler, an organizer for Shut Down DC and vice president of organizing and strategic allegiances for Friends of the Earth Action.

“It’s Washington, D.C. The decisions that are made in this town don’t just affect the people in the U.S., they affect the globe every day,” Butler said Sunday. “I think people around the world are counting on us to be able to stand up in D.C.”

"Organizers hope to bring “the whole city to a gridlocked standstill,” according to the group’s website. To do so, they will target “key infrastructure” likely to have the biggest impact on District residents’ and commuters’ ability to get around, according to the site."

"Participants are targeting heavily-trafficked intersections and streets, according to Butler, though she declined to say which ones. Shut Down D.C. has published several maps detailing information about traffic volume, levels of employment downtown and sites where prominent oil and gas lobbyists work.

“Our goal is to bring the city to a standstill … there will be people throughout the city focusing on making that happen,” Butler said.

"The Shut Down DC coalition includes activists from a wide range of climate and social justice organizations — more than two dozen at last count, according to Butler. Participating groups include Black Lives Matter DC, Code Pink, Metro DC Democratic Socialists of America and Werk for Peace.

Resisting Trump Action Camp was a "series of trainings and workshops in DC" organized by self-proclaimed anarchist group DisruptJ20. The trainings were planned from January 14-16 2017 with the goal of disrupting the 2017 inauguration of Donald Trump. Liz Butler was invited to a meeting "for anyone who is wanting to organize a blockade of a check points on the Day of Trumps Inauguration." She was also invited to the Checkpoint Planning Call.

Members of the Left Up To US closed Facebook group, as of August 11, 2017 included Liz Butler,[7]

Liz Butler served as a Senior Fellow for the Movement Strategy Center, which is close to the Freedom Road Socialist Organization. 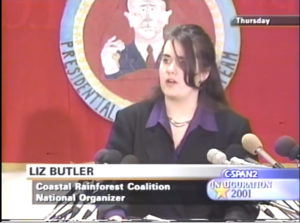 In 2001, Liz Butler was a member of a group Justice Action Network that planned protests against the Inauguration of President-elect George W. Bush.[8]