As Secretary of Labor, Lisa managed 500 employees and an $87 million budget; she focused on connecting employers to resources and jobseekers – particularly those on welfare or leaving Delaware prisons. As State Personnel Director, Lisa was commissioned to investigate the Delaware State Police for racial and sexual discrimination. Working with local and national experts in policing and civil rights, the 2001 Blunt-Bradley Report served as a roadmap to improve the internal and external relations of the State Police.

In 2017 Lisa Blunt Rochester was a new member of the Congressional Black Caucus.

In 2017 Lisa Blunt Rochester was a new member of the Congressional Progressive Caucus. 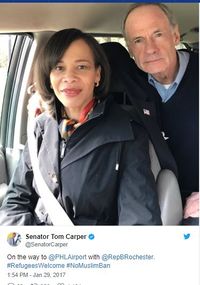 January 29, 2017, members of Delaware's congressional delegation joined a protest against an executive order barring refugees from coming into the United States.

In a tweet Carper said he would "speak with officials and demand that refugees are not detained or denied entry."

"Our country was really built on the ideals of folks coming here to make a better life, especially if they were persecuted, and this really doesn't represent us," said Blunt Rochester. "Instead of us having a process that is orderly and makes sense--we instead of have confusion and fear--and that's the last thing we need right now."[1]

Staff, past and present