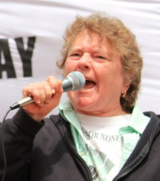 Linda June Evans is currently an organizer with All of Us or None, a national organization of prisoners, formerly-incarcerated people, and our families. All of Us or None is fighting the many forms of discrimination people face because past imprisonment or a conviction history. Linda was a political prisoner for 16 years because of her activities against the U.S. government. In the 1960’s, Linda was a regional organizer for Students for a Democratic Society (SDS/Weatherman), working to end the Vietnam War and to support Black liberation. She was active in the women’s liberation movement and the lesbian community, and she organized support for Black and Chicano/Mexicano grassroots organizations in Texas. She was a national leader of the John Brown Anti-Klan Committee, which fought against white supremacy and the KKK, forced sterilization, and killer cops. Linda began working with others to develop a clandestine resistance movement to change government policies. She was arrested in 1985, and received a 40 year sentence, which was commuted by President Clinton on January 20, 2001.[1] Linda Evans is an organizer at Legal Services for Prisoners With Children.

Her partner is Eve Goldberg.

In 1969 Linda June Evans age 18, from Philadelphia, was a member of the first Venceremos Brigade to Cuba.[2]

According to a federal indictment, a smaller group, Bill Ayers, Bernardine Dohrn, Linda Evans, Erik Mann, Howard Machtinger, Diana Oughton and Mark Rudd, met secretly in Flint on December 30, 1969 at the Parish House of Sacred Heart Convent to set up a central committee. It was modeled after Lenin’s democratic centralism. The Weather central committte was to direct underground bombings nationwide from New York, Chicago, Detroit and Berkeley aimed at police, military, university and commercial targets. There was also talk of assassinations. The Liberation News Service reported, “Part of armed struggle, as Dohrn and others laid it down, is terrorism. Political assassination… and… violence…were put forward as legitimate forms of armed struggle.[5].”

Eric Mann, soon became an SDS defector and a Flint Police informant. He reported a man dressed as a priest distributing 200 sticks of dynamite in the parking lot to drivers of cars with license plates from New York, Washington, Colorado, Wisconsin, Illinois, Ohio and Pennsylvania, including Theodore Gold, New York[6].

In 2007 Linda Evans was listed on the DataCenter's annual report as a donor to the organization. The Oakland, California based DataCenter is widely regarded as the intellegence wing of the United States Left and has close ties to Cuba.[8]