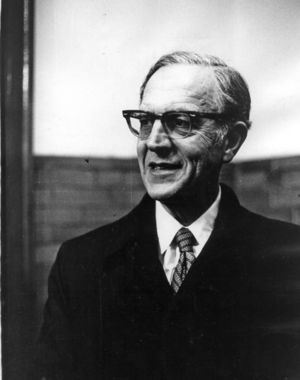 Template:TOCnestleft Honorable Leon Mathis Despres (1908-2009) was a controversial Chicago Alderman and prominent socialist activist. He was married to Marian Despres.

Leon Despres was a lawyer. He represented clients in the labor movement and clients facing issues of civil rights and civil liberties. (From 1979, he was in partnership[1]with Tom Geoghegan.) He was, for many years, very much a movement lawyer.

Despres was a Chicago alderman, representing the 5th ward in Hyde Park. He was for many years the lone alderman in opposition to Daley the Elder and the Democratic machine in the Chicago City Council.

He was a sometime advisor to Barack Obama.[2]

Born in 1908 Leon Despres moved as an infant to Chicago's Hyde Park area and lived there almost his entire life. Despres studied law at the University of Chicago, gaining his degree in 1929.

Hooking up with Alinsky

In the late 1920s Despres became friendly with the future father of "community organizing" Saul Alinsky- a sociologist and sometime associate of Chicago's Capone gang.

According to the Chicago Tribune centenarian Despres gave a speech on Alinsky at their old Alma Mater in January 2009, which revealed much about both men[3].

But palling around with street toughs convinced Alinsky that social problems had to be tackled head-on, not by gathering statistics, said Leon Despres, a former 5th Ward alderman, and a classmate of Alinsky’s at U. of C.

He and Alinsky went to a shooting range to prepare for the revolution that seemed inevitable as the Great Depression appeared to be the end of capitalism.

But socialism and the revolution never came, and Alinsky afterward became intolerant of ideology...

After a brief fling with the Democrats, Despres joined the Hyde Park branch of the Socialist Party USA in 1933-remaining a member until 1937[4].

Mixing with communists and spies

Despres was a union lawyer by 1937 and became heavily involved in supporting strikers at Republic Steel in Chicago through the Lawyers Constitutional Rights Committee. The strike ended in tragedy when 14 strikers were killed and many wounded in a hail of police bullets.

According to the Illinois Labor History Society[5].

Len (Leon) was among the lawyers who took depositions from the many witnesses to the carnage inflicted by the Chicago police at the 1937 Memorial Day Massacre at Republic Steel. Later, Len helped the La Follette Congressional Investigating Committee to gather information used in its scathing criticism of the police conduct on the field that day.

The Communist Party USA orchestrated the ill-fated strike, working through the party dominated Congress of Industrial Organizations (CIO). Lee Pressman, the CIO lawyer played a major role. It was later revealed that Pressman was a secret communist and Soviet spy-part of the Ware Group, founded in the U.S. Department of Agriculture.

Despres's colleague on the Lawyers Constitutional Rights Committee, John Abt was also a secret communist and Ware Group member.

From 1931 to 1935 Despres also worked with another Communist Party USA front, the Chicago Civil Liberties Committee, but left because of the "Stalinism" of its leaders Tom McKenna and Ira Latimer[6]. 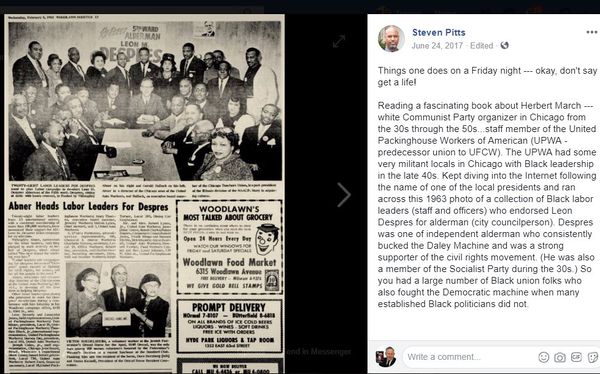 In 1937, a fellow lawyer asked Leon Despres to deliver a suitcase of clothing to Leon Trotsky, the exiled Bolshevik living in Mexico. The Despreses traveled south and met not only Trotsky but his ally, artist Diego Rivera. Marian Despres sat for a portrait with Rivera while her husband escorted Rivera's wife, the artist Frida Kahlo, to a movie[7].

In Hyde Park in the 1950s and 1960s, Leon Despres was active building the coalition of communists, socialists, leftist Democrats, unionists and black radicals that would go on to elect Harold Washington, Carol Moseley Braun and eventually Barack Obama.

In 1955 Despres was elected Chicago City Council as an independent Alderman from Hyde Park. Despres, who served until 1975 was a left wing maverick, usually the sole dissenter against Mayor Daley's invincible "machine".

In 1965 Despres worked with Timuel Black to organize a group of Chicagoans who flew to Alabama, where they joined the historic march with Dr. Martin Luther King, Jr. from Selma to Montgomery[8]. 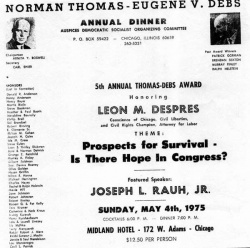 According to Chicago Democratic Socialists of America leader[10]Bob Roman Leon Despres was never a member of DSA or the New American Movement or the Democratic Socialist Organizing Committee... But he did have a long and intimate relationship with the Debs - Thomas - Harrington Dinner.

Most typically Leon Despres served as the Master of Ceremonies, also referred to as "Toastmaster" in earlier years. Despres was good at this role. He was funny, organized, articulate, and he very much presided over the event. The last year he presided over the Dinner was in 1998. I recall that he was delighted to be asked. It was obvious that he knew very well what he was doing; his professionalism was thrilling. But it also seemed apparent that he was no longer performing up to his old standards. And his standards were high. Despres served as the Master of Ceremonies in 1968, 1974, 1976, 1985, 1987, and 1998.

In 1962, prior to the Dinner being an awards event, Leon Despres was a featured speaker at the Dinner, sharing the event with author Harry Golden.

Despres was the honoree at the 1975 Norman Thomas - Eugene V. Debs Dinner. The speaker that evening was Joseph Rauh, a noted civil rights and labor attorney on the national scene, and a founder of the Americans for Democratic Action.

It campaigned strongly against the Chicago Police's "Red Squad" the section dedicated to gathering intelligence on communists and radicals.

Despres was also very active against the "Red Squad"-and was one of their targets.

According to the Illinois ACLU (of which Despres was a leading member)[11];

Unlawful surveillance of political and religious organizations and community groups by the FBI and Chicago police was rampant in Chicago for many decades up through the mid-1970s, when federal lawsuits by the ACLU of Illinois and other organizations resulted in court supervision over these intelligence-gathering activities. Groups like the League of Women Voters, Operation PUSH and the Independent Voters of Illinois as well as individuals including former Chicago City Council member Leon Despres, Jesse Jackson Jr., Studs Terkel, Dick Simpson and Dr. Quentin Young were subjected to unlawful surveillance and the disruption of lawful political activities

Quentin Young was a former member of the Young Communist League USA and is heavily involved in Democratic Socialists of America.

In the late 1970s Despres served on a "Citizen's Committee" supporting Timuel Black's unsuccessful campaign for State Representative in the 22nd District.

During the 1983-87 tenure of Chicago Mayor Harold Washington, Leon Despres served on the new Mayor's Chicago Plan Commission and as City Council Parliamentarian until Washington's death in 1987.

In 1998 Leon Despres was listed as a volunteer and intern of Paul Robeson 100th Birthday Committee.[13]

Barack Obama recognized this trailblazer whose contributions to Hyde Park's politics set the stage for our president's own ascent.

In a statement Wednesday, President Obama said, "Through two decades on the Chicago City Council and a long lifetime of activism, Leon Despres was an indomitable champion for justice and reform. With an incisive mind, rapier wit and unstinting courage, he waged legendary battles against the corruption and discrimination that blighted our city, and he lived every one of his 101 years with purpose and meaning. I have been blessed by his wise counsel and inspired by his example."

According to the Chicago Tribune[15];

Despres and his South Side neighborhood, which he represented in the City Council from 1955 to 1975, were long the city's liberal conscience, and both were part of President Barack Obama's original political base.

"Michelle and I were saddened by the passing of our dear friend and a towering giant in Chicago history, Leon M. Despres," Obama said in a statement. "With an incisive mind, rapier wit and unstinting courage, he waged legendary battles against the corruption and discrimination that blighted our city."

StoneCipher Report put it another way[16];

He (Despres) strongly supported Obama, seeing him bringing "a breadth of integrity not in that office in a long time." He also said, "[Obama] is a good man, highly intelligent, but not an elitist. And I see him staying that way."

And a key for the former Alderman was watching the rise of this young community organizer, then state Senator in the same neighborhood that Despres once represented and still knew so well – with Obama being supported and then elected by the same core mixed group of progressives who had emerged in the ‘50s (and solidified through the ‘60s and ‘70s) supporting his independent Democratic candidacy.

Leon Despres' last major political act was in early 2009, when Illinois Congressman Rahm Emmanuel gave up his seat to serve as Obama's Chief of Staff. A bye-election was called in Illinois's 5th District.

Leon Despres's law partner Tom Geoghegan threw his hat in the ring. He was endorsed by Leon Despres, Quentin Young and Don Rose, but lost the Democratic primary race.

Business and Professional People for the Public Interest

In February, 2010, Leon Despres was a former Staff member of the Chicago based Business and Professional People for the Public Interest.[19]