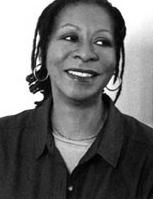 Lena Sherrod is the finance and careers editor for ESSENCE magazine, the preeminent lifestyle magazine for African-American women. In this capacity, she is responsible for the production of the magazine’s Work & Wealth section, in which she writes, assigns and edits articles on money and job-related issues[1].

In 1985, a delegation of 16 Afro-American journalists traveled to the Soviet Union, German Democratic Republic and Czechoslovakia[2].

The delegation consisted of

According to one of the tours leaders Alice Palmer[5];

The trip was extraordinary because we were able to sit down with our counterparts and with the seats of power in three major capitals-Prague, Berlin and Moscow. We visited with foreign ministers, we talked with the editors of the major newspapers in these three cities...

It was a very unusual trip because we were given access...Every effort was made to give us as much as we asked for...We came back feeling that we could speak very well about the interest of the socialist countries in promoting peace.

This was before the (Soviet nuclear test ban) moratorium, this was before the Reykjavik offers...It was very clear to us in our conversations and interviews with people at that time, that this was already something of concern and, something that would be promoted when the opportunity arose, as we can see that it has been.