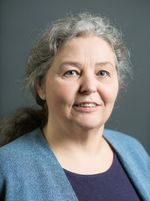 LeeAnn Hall is the executive director of the Alliance for a Just Society, founded in 1993 as the Northwest Federation of Community Organizations. She has been on the leading edge of social and racial justice organizing for 30 years, influencing and effecting national reform in health care, immigration and fair pay. She has guided and inspired hundreds of young organizers into careers in social justice work.

LeeAnn was at the forefront of designing testing models to address under-enrollment in public benefits programs. As the director for Idaho Community Action Network, she developed the successful campaign to cover farmworkers under Idaho’s minimum wage laws. She now leads a network of 14 organizations stretching from Oregon and Washington state to Maine and Virginia.

She received the prestigious Leadership for a Changing World Award from the Ford Foundation, the Advocacy Institute, and the Robert F. Wagner Graduate School of Public Service at New York University and the Prime Movers Award. She has contributed opinion pieces to national newspapers, her work is highlighted in several books and journals, and she is a sought-after panelist.

In addition, LeeAnn serves on boards including Race Forward and the executive committee of the Fair Immigration Reform Movement. She lives in Seattle, Washington.[1]

LeeAnn Hall, Alliance for a Just Society, was a 2011 Rockwood Leadership Institute National Leading From the Inside Out Alum.[3]

Individuals and organizations supporting The 99% Spring, as of April 20, 2012, included LeeAnn Hall - Alliance for a Just Society .[4]

Alliance for a Just Society staff