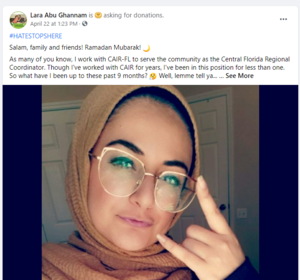 According to Taylor Cook on May 15 2021, 500 members of the Palestinian community and supporters from Tampa Bay rallied to demand an end to the Israeli attacks on Gaza.

Lara Abu Ghannam, an organizer of the event, stated “We’re out here today to commemorate the 73rd Al Nakba, the exodus of my people, which displaced them and made them to flee the violence of Israeli colonizers. My own family, my own mother had fled when she was a few months old to Jordan.”

Hundreds of protesters crowded on the corner of 56th and Fowler to demand an end to the Israeli occupation. Many more honked in support while driving by, their cars decorated with flags and signs in support.

Laith Abdel Hader, member of Students for Justice for Palestine at USF, states, “The momentum that we got today is unprecedented. I haven’t seen this much support for the Palestinian cause in my years of organizing and this shows how the Palestinian cause has become a mainstream issue. This brings us one step closer to liberation.”