Kristin Reed is the partner of Gary Broderick. Lives in Richmond Virginia.

In Richmond, workers at Virginia Commonwealth University announced April 26 that they had formed a union called the United Campus Workers of VCU (UCW-VCU). While this new union, like others, seeks to improve the conditions, pay and benefits of its membership, UCW-VCU views its mission as far more expansive and holistic than fighting solely for the interests of higher education workers. The UCW-VCU story is about defending workers, empowering students, and pushing against defunding, privatization and neoliberalism in higher education. UCW intends to bring a social justice unionism model able to push for higher education that is consistent with the expansion of democracy, and opens a discussion on what it means to unionize the South, and how public sector unions can fight against white supremacy.

Kelsey Huelsman, a member of the steering committee of the University of Virginia chapter of United Campus Workers, welcomed UCW-VCU to the statewide union. “Just as we are stronger when we’re united across departments and classifications at one university, we are also stronger when we unite workers across campuses in order to beat back those who seek to under fund and privatize higher education,” Huelsman said. “Together, we’ll win a Virginia public higher education system we can be proud of.”

UCW-VCU founding member Kristin Reed, an associate professor in the Department of Focused Inquiry, noted the COVID-19 pandemic was the trigger for forming the union. While she has benefits and has felt lucky, Reed realized many faculty lack healthcare, and long term organizing was the only to change things. “Over the past 12 years I have become more aware the feeling of luck is manufactured by the low conditions of our faculty workforce. I’ve had to wrestle that faculty with children don’t have maternity leave,” Reed said. “Faculty have had to leave because of cancer, and we have to cover their classes without pay. The fact we have to do it off the books… We don’t have leave, we don’t have short term disability benefits and that’s really precarious,” she added.

Under the banner #TheVCUWeDeserve, UCU-VCU invited Richmond Public Schools Senior Lux Aghomo to its April 26 rally. Aghomo, a Black student activist, noted the connection between VCU’s failure to do right by adjuncts and failure to do right by the Richmond community as a whole. In particular she challenged VCU for having a Black student population at 17% – far lower than 45% of Richmonders who are African-American.

Progressive political leaders are celebrating the UCW-VCU effort, including gubernatorial candidate Jennifer Carroll Foy and Sam Rasoul, who is running for lieutenant governor. Their bonafides have earned them both endorsements from groups such as Richmond For All, CASA, Working Families Party and Sunrise Movement. Rasoul attended Monday’s rally in person. Carroll Foy released two videos in support. Sean Perryman, another progressive candidate for lieutenant governor and the former president of the NAACP’s Fairfax, VA chapter also released a statement in support. Even State Sen. Jennifer McClellan, a gubernatorial candidate whose hesitancy to support full repeal of right-to-work laws has hampered her campaign, released a statement on Twitter in support.[1]

Demonstrators stood in front of Richmond City Hall on Tuesday November 12 2019 calling for city leaders to focus on policies that do more to help the people they serve.

Planned by the organization Richmond for All, the demonstrators want City Council members to work harder to create better schools and public housing in the city.

"We don't want to lose people when we redevelop and grow we want to have policies that bring everyone along with us, " Reed said.

Progressive political leaders are celebrating the UCW-VCU effort, including gubernatorial candidate Jennifer Carroll Foy and Sam Rasoul, who is running for lieutenant governor. Their bonafides have earned them both endorsements from groups such as Richmond For All, CASA, Working Families Party and Sunrise Movement. Rasoul attended Monday’s rally in person. Carroll Foy released two videos in support. Sean Perryman, another progressive candidate for lieutenant governor and the former president of the NAACP’s Fairfax, VA chapter also released a statement in support. Even State Sen. Jennifer McClellan, a gubernatorial candidate whose hesitancy to support full repeal of right-to-work laws has hampered her campaign, released a statement on Twitter in support.[3]

The demonstration was in part a response to a fear that there is a push to gut public housing units to redevelop the area.

The group is also calling for city leaders to continue to freeze public housing evictions.[4]

I'm proud to stand with Richmond for All and so many residents of our city to demand housing, education, and environmental justice. Congratulations to everyone who came together last night to say we deserve representation that puts the needs of people first.

Kristin Reed in the crowd. 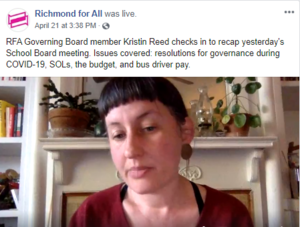 Richmond for All governing board member.

Infinite love to my #RedForEd Colleagues, esp Beth and Lindsay who are SO committed to students they couldn’t make the group photo, and Courtnie who came across campus for this! VCU faculty stand with public school teachers and students in demanding more just educational outcomes in Richmond and across the state of Va. See you all on Monday. — with Stephanie Rizzi, Lindsay Klarc Chudzik, Virginia Wray Totaro, Courtnie Wolfgang, Beth Kreydatus and Frank Cha.

It's a beautiful post election morning, and I am so thankful and so proud of every ounce of love and labor we poured into Gary Broderick's campaign for school board. We built a team that will far outlast this campaign, and we furthered a movement that will extend beyond this election cycle. I've heard it advised you should claim no easy victories. The work we did over the last six months was not easy, and the outcomes—from the expansion of this political team to the realization of our call for a teacher free speech resolution—were absolutely a victory.

I love you all, and I'm looking forward to continuing our work. We have a lot to do. — with Christopher Rashad Green, Stephanie Rizzi, Aaron Tabb, Emma Eliza and Gary Broderick. File:Zvvvvvbbbbb.PNG

"I grew up in a family of public school educators, and I’ve seen what decades of right-wing attacks have done to our schools. We’ve pushed public schools to the brink of starvation and taken refuge in the mythology that corporate intervention is the only solution. Kenya has shown tremendous bravery in standing up to powerful forces that would reduce democratic governance of schools and would transform kids into consumers. Her message is clear: we can’t build a just society until we can assure every child an equitable education in a fully-funded neighborhood school." 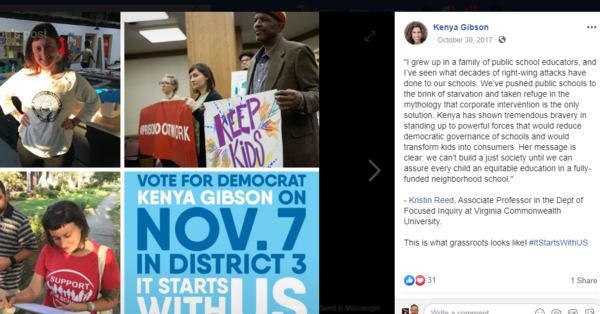