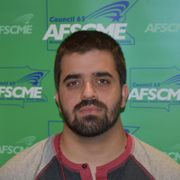 Kooper Caraway comes from a working class family in Texas. His Mother was a retail worker and his Father worked in the Trucking Industry. Many of his Cousins and his Grandfather were Union Steelworkers in Lonestar, TX.

He began organizing in High School. When Immigration Agents, under the direction of the Bush Administration, set up camp and began raiding peoples homes in the small town of Mt. Pleasant, TX Kooper Caraway, then a High School Junior, organized a series of actions and demonstrations until the Federal Agents packed up and left town. He then went to work in Dallas for the Labor Movement. As an organizer with North Texas Jobs with Justice he was succesful at bridging the Community-Labor Gap. He has since served as a Union Rep for the American Federation of Teachers and an Organizer for the United Food and Commerical Workers Union.

In 2017 he relocated to South Dakota to serve as Lead Organizer for AFSCME Council 65 and on Jan 3rd 2018 he was elected President of the Sioux Falls AFL-CIO. At 27, he became the the Youngest CLC President in the Nation.[1] Dallas Labor Surges Forward on Human Rights Day

According to Gene Lantz North Texas Jobs with Justice and the Dallas AFL-CIO joined together to celebrate December 10 2013 , International Human Rights Day, at CWA 6215 Hall, 1408 N Washington in Dallas. Rosemarie Rieger did most of the organizing work, but the new Young Workers Director for the Dallas labor movement, Kooper Caraway, brought in the most exciting speakers.

The first speaker that Rieger introduced was Kooper Caraway. He explained that the national AFL-CIO convention of the past summer had mandated all units to develop youth and community outreach projects. He emphasized the importance of working together for both youth and labor. The bosses, he said, always try to divide young against old, but "We're not going to play your games any more. We see right through you. You're not going to divide us against each other!"

The next speaker was Christy Medrano, age 19 and head of Feminist Majority. She said that Latino women make 59 cents for every dollar that white men make doing the same work.

Emanuel Vinton of UNITE-HERE was born in Liberia and thus contributed to the great diversity of the group. We had undocumented workers, Central Americans, one Mid-Easterner, several Africans, gays, straights, youth, union members, one political office-holder, and more females than males.

Mark York talked about how his union (Transport Workers) protected women and gays from the bosses. "We've stood up for women in the workplace and made sure they had equal pay. We wouldn't stand for harrassment of gays!" York indicated that he would like to find workers from the LBGT community to help form a constituency group of the AFL-CIO, "Pride at Work!"

Colby Harris of OURWalmart is one of the most popular activists in North Texas because of his personal charm and his courage in standing up to the world's largest employer.

Mia Dia, a youthful worker and activist originally from Jordan, talked about her inspiration in forming the Women's Alliance for Leadership. Like Christy Medrano, she had been inspired by the fight in Austin over women's rights. [2] 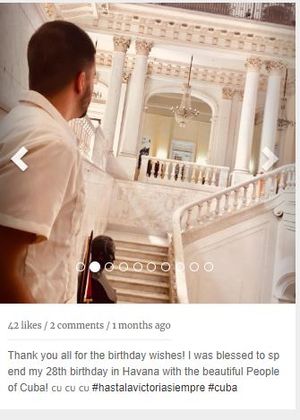 In 2017 Kooper Caraway spent his 28th birthday with his family in Cuba.

In 2013 Kooper Caraway was Volunteer Coordinator Kristi Lara for School Board.

In 2018 Kooper Caraway was an Executive Board Member South Dakota Democratic Party.

Congratulations to the Working Class of Missouri! Your efforts, commitment, and mobilization have inspired working people around the world! A big shout out to Brittany Anderson, Yennifer Mateo Castillo, David Richard Gilbert-Pederson, Billy Myers, and everyone else on my friends list who worked day and night on the front lines. What you have achieved today will not soon be forgotten. You have proven today that the future of Working People will not be determined by Billionaires or Banks not by Politicians or Judges, but by the workers themselves. #1u Hasta La Victoria ✊🏾✊🏾✊🏾

In November 2015, members of community organizations from Southern California attended the ILPS 5th International Assembly in Manila, Philippines, where they met organizers from over 40 countries committed to fighting global imperialism, neoliberalism, and U.S. militarization. 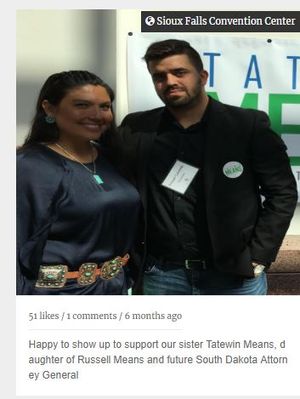 2018: Happy to show up to support our sister Tatewin Means, daughter of Russell Means and future South Dakota Attorney General

For decades, the working people of South Dakota have been exploited and taken advantage of by a small minority of the most elite political and business interests. While corrupt leaders line their pockets off of the backs of hard working South Dakotans, our families are expected to work multiple jobs for little pay.

This has been the reality for thousands of working families. And it will take all of us to change that reality.

Working families need a champion in Pierre. Working South Dakotans deserve a Fighter who will work for ALL of us, not just the privileged few.

That is why the AFL-CIO, the organized working class of South Dakota, strongly endorse Our Sister Tatewin Means for Attorney General.

We invite all who are able, to join us in building a broad based People’s Coalition to change the culture in Pierre and the lives of working families across our state.