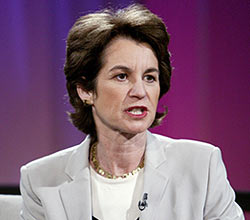 Kathleen Kennedy Townsend (born July 4, 1951) is an American attorney who was the sixth Lieutenant Governor of Maryland from 1995 to 2003. She ran unsuccessfully for Governor of Maryland in 2002. In 2010 Townsend became the chair of the non-profit American Bridge, an organization that will raise funds for Democratic candidates and causes. She is a member of the Kennedy family.

The eldest child of Ethel and Robert F. Kennedy, and the eldest grandchild of Rose and Joseph Kennedy, Kathleen at first didn't appear to be destined for political office. She graduated from Harvard University and earned her law degree at the University of New Mexico. After her marriage to David Townsend in 1973, her political involvement consisted of working for her uncle Ted Kennedy's senatorial campaigns as well as local candidates. After a move to a Republican stronghold in David's home state of Maryland, she decided to run for Congress in 1984, an election she lost. She then worked as a Deputy Assistant Attorney General in the U.S. Justice Department. In 1994 gubernatorial candidate Parris Glendening chose her as his running mate. Their team won and Kathleen became Maryland's first female lieutenant governor. During her two terms, she concentrated on education, healthcare, and anti-crime measures. She ran for governor of Maryland in 2002, but lost that election to Republican Robert Ehrlich, Jr.

Kathleen Townsend founded the Robert F. Kennedy Human Rights Award. She has taught at the University of Pennsylvania and the University of Maryland. Before becoming lieutenant governor, she founded the Maryland Student Service Alliance and was instrumental in making Maryland the first state to require high school community service. She was the former chairperson of the Robert F. Kennedy Memorial Foundation and is on the board of the John F. Kennedy Library Foundation.[1]

In 1985, Kathleen Kennedy Townsend of Pennsylvania was listed as a member of the Feminist Commission of the Democratic Socialists of America.[2]

The Working Families Legislative Conference was part of a series of regionally based Next Agenda conferences, "representing a new kind of partnership between CAF and state-level progressive organizations — unity coalitions which are coming together around a progressive action agenda for their state and for the nation".

“We are proud to be helping to co-sponsor this remarkable conference,” said CAF co-director, Roger Hickey. “Through our collaboration with state-level citizen groups, like Progressive Maryland, we are able to rally support for an economic recovery agenda that works for states and for the country. This mission was important before September 11. Now it is essential.”

“We must organize at the grassroots, build power in localities and states, and create in theses ‘laboratories of democracy’ the formula for economic success in Washington, DC.” said Sean Dobson, one of the leaders of Progressive Maryland.[3]

In 2005 Kathleen Kennedy Townsend served as a trustee[4] of Center for American Progress. Former Lieutenant Governor of Maryland 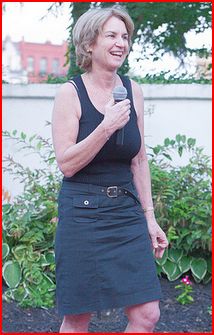 Kathleen Kennedy Townsend attended a reception: June 20, 2012 Center for Democracy in the Americas' DA 6th Anniversary Celebration Honoring "Unsung Heroes" She presented an award to the family of Stephen Rivers.[6]

President Barack Obama told about 20 hunger strikers on the National Mall on Nov. 29 2013, that he supported their effort to pressure House Republicans to overhaul immigration laws but was concerned about their health.

Three of the protesters, including labor leader and Democratic Socialists of America member Eliseo Medina, 67, have not eaten for 18 days and are drinking only water. Obama and his wife, Michelle, met with the group for about 30 minutes in a heated tent near the steps of the Capitol to discuss the immigration bill that has stalled in the House.

"He was really concerned about our health," said Christian Avila, 23, a student from Arizona who stopped eating on Nov. 12. "He said we might think about handing the torch over ... and taking a break."

Avila — who wore a brown hooded sweat shirt that read "Act. Fast." — said he planned to avoid eating as long as he could. Obama told the group that he had instructed his staff to figure out what else they can do to get an immigration bill to his desk. He said he believes Congress eventually will change the law to allow people in the country without documentation to work and live legally in the U.S.

"It's not a mater of if, but when," the president said, according to Avila.

Shortly after the Obamas' visit, one time DSA member Kathleen Kennedy Townsend, daughter of the late Robert F. Kennedy, stopped by to sit with the fasters. In 1968, shortly before he was assassinated, her father visited Cesar Chavez in Delano, Calif., where the labor leader was fasting to bring attention to the working conditions of farmworkers.

"There is a moral quality to what kind of country we are," Townsend said after meeting with the protesters. "That is what my father believed.... This is about real people and their lives."[8]