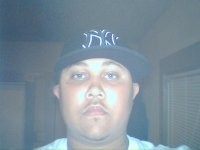 Karega Rodney Hart was a Northern California activist. He was a long time member of the Freedom Road Socialist Organization, and before that, the League of Revolutionary Struggle and the Socialist Organizing Network.

Karega Hart died May 3 2014 in Oakland, CA., after a years-long battle with slowly worsening multiple sclerosis. He was 63. A tribute read by his granddaughter Ashli Hart at his memorial service noted, “While still in his teens, Karega became a lifelong fighter for African liberation, workers’ rights and power, women’s equality, reparations and socialism.”

“While deeply committed to the struggle for Black liberation, Karega taught us that the struggle for racial equality had to be tied to the class struggle,” said Millie Cleveland in a tribute from SEIU Local 1021, where Karega served for a decade as Education and Training Director.

“Despite 250 years of slavery, 90 years of Jim Crow, and 60 years of separate but equal he taught us that racial equality would only be achieved when working class people of all colors were united and organized. Despite his strong stance against any form of oppression, Karega was not motivated by hatred but instead motivated by his love for all people. This is a lesson we should all learn.”

The list of organizations in which Karega was active begins in Detroit and includes the United Auto Workers, where he was an active rank and file leader, the Congress for African People, the African Liberation Support Committee, the Black Workers Congress, the League of Revolutionary Struggle, the Black Radical Congress, and the National Coalition of Blacks for Reparations in America. He considered the late poet Amiri Baraka to be a close friend and mentor, and he worked on campaigns to free American political prisoners, including the late Geronimo Ji Jaga Pratt, Mumia Abu-Jamal and Leonard Peltier.

After he moved to the San Francisco Bay Area in the 1980s Karega became a bus driver and president of the Amalgamated Transit Union Local 1574. Later he joined SEIU 1021 in a staffing capacity and continued his community work by becoming a board member of the Women’s Economic Agenda Project (WEAP).

Karega’s views also evolved through the years from a focus on race to a focus on class. In 2009 he sat down for an interview with some WEAP student interns who were working on a variety of social justice projects.

“I used to think the problem was bad white people.” he told them. “I learned it was the system of capitalism that framed people’s ideals about each other and that was the source of the problem: that capitalism benefited from racism. I also learned later that simply by putting more black people in office was not going to solve the problem.”

The WEAP interns found Hart to be “. . . an especially thoughtful person, an intellectual who has a plethora of hands-on experience to strengthen his assessment about growing poverty – the high rates of homelessness and uninsured, the low rates of union representation, and the immense income disparity between the rich and the poor

“I think one of the biggest problems is that we lack a full analysis of global capitalism and all of the things connected to that” he told them. “Unions right now operate out of a framework of “how do we reform and get what we can out of the system?” Not “how do we change the system entirely?” So when you have unions only concerned about what they can get out of the system, then the deeper issues of poverty – contracting out, deregulation, etc. – all of those things become secondary issues because the members of unions are educated only to get what they can out of this system: higher wages, a nice house, a nice car and maybe the hell with everyone else. We don’t think any further than that. It is one of my challenges, to get people to look at things more deeply, to understand that getting more vacation time, more benefits, more money is not necessarily going to solve your problem.”

Ethel Long-Scott, WEAP’s Executive Director, was also a friend. She spoke at the memorial service organized by Karega’s family. 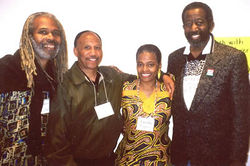 In the 1970s Karega Hart was active in the Congress of African Peoples in Detroit. 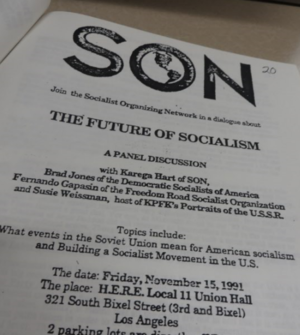 Karega Hart was a member of the Socialist Organizing Network. 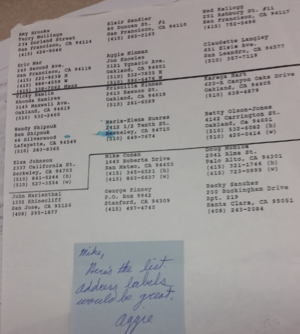 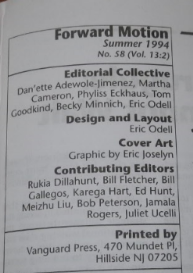 Karega Hart, was in 1996, a member of the Northern California chapter of Coalition of Black Trade Unionists. [4]

"Perspectives for Democracy and Socialism in the 90s"

The Conference on Perspectives for Democracy and Socialism in the 90s was the Committees of Correspondence's first national conference held in Berkeley, California July 17-19, 1992.[6]

Workshops that were held at the conference on Saturday, July 18 included:[7]

Multiracial Left How can we build a multi-racial, multi-national left movement? A critical question for the survival and effectiveness of the left. 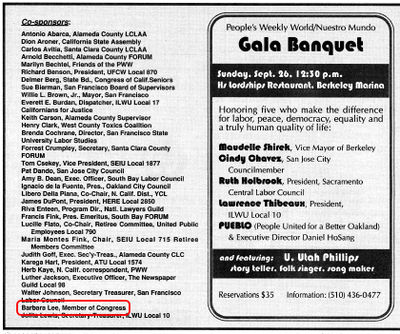 In 1999, a panel discussion entitled "Where are White Activists in the Fight Against Racism?" was composed of speakers Harmony Goldberg, SOUL; who spoke on the Mumia Abu-Jamal Campaign; Jo Hirschman of Police Watch who spoke on Police Brutality; and Adam Gold, of C-Beyond who spoke on organizing in the suburbs.

These talks were facilitated by Ilana Berger, of POWER who gave a talk entitled "The Early Marxist View on Housing: How Relevant is it Today?" at this meeting. The talks were sponsored by the Committees of Correspondence for Democracy and Socialism linked organization, the Center for Political Education.[12] 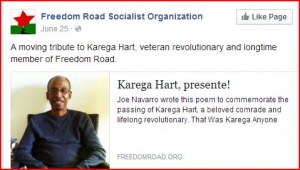 Before his death in 2015 Karega Hart was an active nd long time member of the Freedom Road Socialist Organization.