Kara Eastman is a Democratic Party activist in Nebraska. 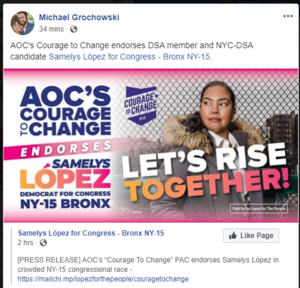 In February 2020 Alexandria Ocasio-Cortez launched her own political action committee to boost challengers in 2020 congressional races.

The move shows the 30-year-old New York freshman's intentions to continue battling with her party's establishment.

Ocasio-Cortez unveiled the website for her group — dubbed "Courage to Change PAC" — along with a slate of seven endorsements for female candidates who in some cases are competing against other Democrats backed by party campaign committees.

Her new group's mission statement says it "seeks to reward challengers and incumbents who display political courage — people who refuse to bow to establishment pressure, who advocate ferociously for working-class families, and who have lived the same struggles as the people they seek to represent."

Ocasio-Cortez touted House and Senate candidates who haven't served in Congress before; five are women of color.

Cristina Tzintzun Ramirez, who is running for Senate in Texas, is competing against MJ Hegar, a combat veteran who is backed by the Senate Democrats' campaign arm.

The others — Jessica Cisneros of Texas, Georgette Gomez of California, Samelys Lopez of New York, Kara Eastman of Nebraska, Marie Newman of Illinois and Teresa Leger Fernandez of New Mexico — are running in House races.

Two are running against current House Democratic incumbents — Cisneros is attempting to beat Texas Rep. Henry Cuellar, a moderate eight-term member who stresses his appeal to independents and Republicans. Newman is running for the second time against Illinois Rep. Daniel Lipinski, also serving his eighth term, who some liberals have criticized for his anti-abortion rights voting record.[1]

In 2020 Kara Eastman was a Brand New Congress endorsed candidate for US Congress in Nebraska.

Great turnout for our first canvass! Excited about hitting the doors and talking with voters in #ne02 about the issues that matter most! #canvassbeforekickoff — with Jake Seeman, Giselle Bergmeier, Jaden Perkins, Fatima Flores-Lagunas and Lee Nakamoto. 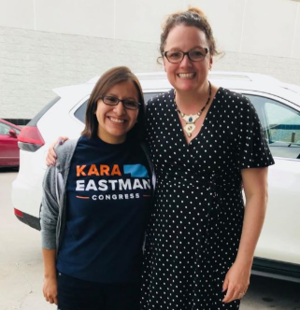 Fatima Flores-Lagunas is a Field Director at Kara Eastman 2020. Also worked on 2018 campaign.

Learn how you can get involved with Kara Eastman’s campaign-electing a female congressional representative for #NE02 focused on the real issues facing this nation! 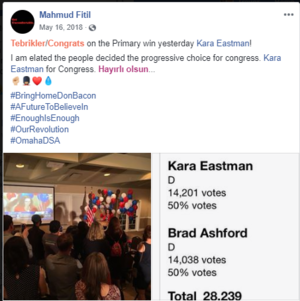 I am elated the people decided the progressive choice for congress. Kara Eastman for Congress. Hayırlı olsun... ✊🏼💂🏼❤️💧

Had a great canvass for Kara Eastman today! Looking forward to having this Nebraska progressive representing us in Congress. #EastmanForCongress — with Sarah Jane Teetzel, Scott Burger, Tom Tilden and Alex Garrison. 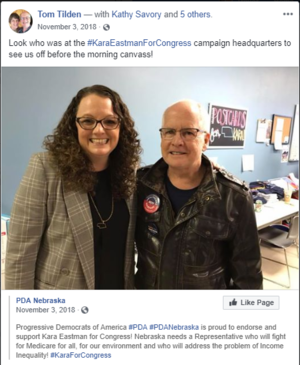 Tom Tilden — with Kathy Savory and Janet Tilden, Sarah Jane Teetzel, Rachel Carraher, Rob Carraher, Kara Eastman. November 3, 2018 · Look who was at the #KaraEastmanForCongress campaign headquarters to see us off before the morning canvass!

Progressive Democrats of America #PDA #PDANebraska is proud to endorse and support Kara Eastman for Congress! Nebraska needs a Representative who will fight for Medicare for all, for our environment and who will address the problem of Income Inequality! #KaraForCongress.