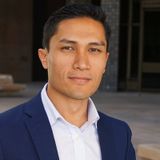 Kaniela Ing is a Berniecrat, a term used for those democrats (generally) running for office who have expressed support of former presidential candidate Bernie Sanders.[1]

Endorsed by Our Revolution

Kaniela Ing was endorsed in 2016 by Our Revolution, an organization run by former campaign workers and supporters of former socialist presidential candidate Bernie Sanders.[2]

Kaniela Ing HI 01 was endorsed by Justice Democrats for 2018. 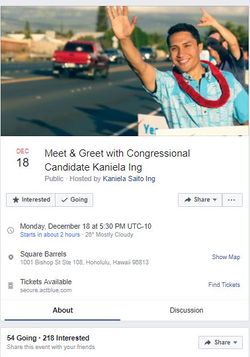 Father, Native Hawaiian, and state legislative leader, Kaniela Saito Ing is running for Congress as a proud progressive who will ensure no one gets left behind (HI-01). Kaniela is the only candidate looking at this seat who has a record of fighting for everything we believe in--like womenʻs rights, LGBT equality, climate action, and more. With your support, he will take our island values to DC.[3]

“Standing up to Trump is important, but it’s not enough. Leaders must stand up to big-money corruption everywhere and offer a positive vision to win the world we want to see. Hawaiʻi’s cost-of-living is out of control and local families are being squeezed out of their neighborhoods by outside investors. People tell me that they feel like the system is leaving them behind. We can’t keep letting the same establishment elites handpick our leaders and expect things to change. We need a new way forward for our children to have a shot at success. I am running a grassroots campaign to put people before profits, keep Hawaiʻi Hawaiʻi, and offer a new generation of progressive leadership. I am uniquely positioned with decades ahead of me to build the seniority and influence Hawaiʻi needs.” said Ing.

“My decision to run for this open seat is based on where I can make the greatest impact for the state I love and to carry our progressive values as far as possible. Patsy Mink, Tulsi Gabbard, and Colleen Hanabusa all represented areas outside of their districts when they ran for Congress. But they made the case to Hawaii residents that they were best fit for the job. I will work to earn the trust of each voter the same way they did, by listening to their needs and connecting through our shared island values one person at a time.”[4]

Kaniela Ing, 29, is a rising progressive firebrand who doesn’t pull punches. A state legislator running for U.S. House, he is calling for tuition-free college, affordable housing, moving the U.S. to 100 percent renewable energy by 2035, a $3 trillion infrastructure plan, universal basic income, a federal jobs guarantee, paid family leave, pot legalization, a ban on private prisons and the impeachment of Donald Trump so that “we can focus on progress beyond resistance.”

The Democratic Socialists of America member won his seat in the Hawaii legislature by 26 points in 2012, after knocking on 15,000 doors. He defeated the far-right Republican incumbent in a solidly red district. A year later, when the Hawaii legislature debated same-sex marriage and heard five days of testimony, many from fierce opponents, Ing thanked them. Then he made his own passionate case for legalization, noting that he grew up in a conservative Christian home and identifies as a Christian. “I’m trying to adhere to [the apostle] Paul’s grand thesis of love and acceptance of all,” Ing said. “It is time we as Christians help form a more tolerant and accepting church right here in Hawaii, in the true spirit of aloha.”

Ing’s politics are shaped by the deep inequalities of his home state. Last year, he compared Facebook founder Mark Zuckerberg to abusive “sugar barons” after Zuckerberg began suing residents of Kauai to force them off their land. Ing says that his first priority will be “reshap[ing] the rigged economy.”

‍‍‍Kaniela Ing was elected to the State House in 2012, quickly rose up the ranks, and c‍‍‍urrently serves as Majority Policy Leader.[7]

When I first ran for State House at 22 years old, I could count the folks who thought I had a chance on one hand—and half of them lived at my mom’s house. I was in a Republican district, running on a progressive platform, but I couldn't stand by while the tea-party incumbent sold-out our islands.

So I personally knocked on 15,000 doors. I walked my neighborhood from noon to sunset, after working a full-time sunrise shift cleaning locker rooms at a nearby resort. It was an uphill battle, but people could relate to my grassroots message. So they joined the campaign. We were outspent-10-to-1, but still won by a huge 26 percent. 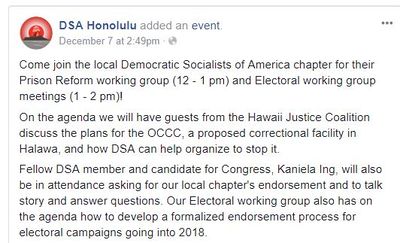 On the agenda we will have guests from the Hawaii Justice Coalition discuss the plans for the OCCC, a proposed correctional facility in Halawa, and how DSA can help organize to stop it.

Fellow DSA member and candidate for Congress, Kaniela Ing, will also be in attendance asking for our local chapter's endorsement and to talk story and answer questions. Our Electoral working group also has on the agenda how to develop a formalized endorsement process for electoral campaigns going into 2018.

About 200 people gathered at the state Capitol on Friday November 3, 2017, to protest the president's visit, carrying signs that read "Welcome to Kenya," "Aloha means goodbye," and "Immigration gave me my family."

Among those in the crowd: State Rep. Kaniela Ing.

Ing said he was attending the anti-Trump rally because "aloha is a Hawaiian value rooted in the idea of love for one another."

“Hawaii is the most diverse state in the nation, and just a few days ago Trump literally said, ‘Diversity sounds like a good thing, but it is not a good thing.’ That statement alone undermines the values that make Hawaii, Hawaii. So yes, aloha means ‘hello,’ but it also means ‘goodbye,'" Ing said, earlier in the day.

"I'm really upset that Trump is on our island. We don't like his brand of racism here and we want him to leave as soon as possible," protester Kanani Ai said. "I've stayed out of politics my whole life and it's not about Republican or Democrat. It's about human rights."

"I believe in human rights. We are angry. We want change," Allyson Villanueva said.[10]

We're thrilled to introduce you to our first-ever round of candidate endorsements: the #SunriseSlate2018!

These candidates are some of the earliest adopters of the #NoFossilFuelMoney pledge and, if elected, would lead the fight against oil and gas lobbyists in state capitols and Washington, DC. They’re putting forward big policy solutions to the climate crisis, like championing a Green New Deal and supporting a just and rapid transition to a 100% renewable energy future that leaves no community behind.