Kaitlin Marone is a New Orleans activist.She has lived in Arkansas, North Carolina and West Virginia. She was the creator of the original brake light clinic in New Orleans, where she is stepping down from a DSA chapter leadership role to help us #OrganizeTheSouth as a Field Organizer.[1]

Before I joined DSA, I worked in the service industry, most recently in an escape room, and spent my spare time being just OK at stand-up comedy. In 2016, I ran for US Senate against John Kennedy (R-LA) to boost my visibility as a comedian, and instead ended up meeting a bunch of brilliant leftists who wanted to work together to make a better world. We founded New Orleans DSA. I invented the brake light clinics, which my comrades took on and built more beautifully than anything I imagined. Seeing the power that we have when we organize together jolted me from my nihilism and made me more hopeful about the future, and I feel extremely lucky to be doing it full time. I organize by this directive from Octavia Butler: Learn or die. Looking forward to building a better world with you all.[2] 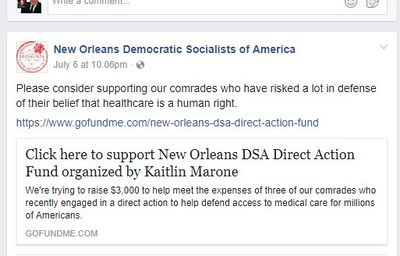 So inspired after this regional DSA leadership training we had in Asheville, NC! Thanks to everyone who came from NC, SC, and TN! Thanks especially to Asheville DSA who did an incredible job hosting & to BeLoved Asheville for providing such a lovely space. Looking forward to all we're going to do to #organizethesouth together. 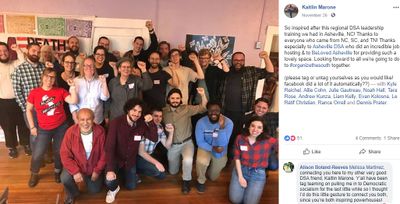 Alison Boland-Reeves Melissa Martinez, connecting you here to my other very good DSA friend, Kaitlin Marone. Y’all have been tag teaming on pulling me in to Democratic socialism for the last little while so I thought I’d do this little gesture to connect you both, since you’re both inspiring powerhouses!

Just finished up with the Pacific Northwest conference, and this one was particularly cool, because I'm not the organizer for this region, so I got to learn so much about the work these chapters are doing. Folks showed up in mass, put together some sessions that taught me a lot, and are already planning the work with each other that will take us towards democratic socialism. Each one of these chapters has a historic opportunity in this moment, and we intend to seize it.

Thank you to Geno for the photo and to the regional team of Portland Democratic Socialists of America and fellow PNW chapter volunteers that put together such a smooth and successful conference!