John N. Pappademos was a Marxist scholar and longtime member[1]of the Communist Party USA. He died in May 2007 age 82.

Pappademos was born into a poor working-class family in St. Louis. During the Depression, his parents were unable to care for Pappademos and his brother, and the children were put in orphanages. A member of the Communist Party, Jim Moore, provided the support that made it possible for the family to be reunited.

When Pappademos was 16, Moore arranged for him to attend Harris Teachers College. From there, he went to the University of Iowa, which he attended while serving in the Naval Reserve. In 1951, Pappademos earned his master’s degree from Washington University, where he participated in a campus desegregation campaign. In 1964, he received his doctorate in physics from the University of Chicago.

During the 1950s and later, Pappademos and his wife, Ella Pappademos, and their interracial family faced racist and anticommunist harassment. Nevertheless, Pappademos secured a job teaching at the University of Illinois in Chicago (UIC).

Pappademos frequently wrote articles on science for Political Affairs, the Communist Party USA’s theoretical journal, as well as writing for Marxist and non-Marxist scholarly journals. From 1988-2001, he was a referee for the American Journal of Physics.

Harold Washington for Mayor of Chicago

Circa late 1982, members of the Citizens Committee/Harold Washington for Mayor of Chicago (in formation) included John Pappademos.[5]

In 1994 John Pappademos, Oak Park, was listed on a "Membership, Subscription and Mailing List" for the Chicago Committees of Correspondence, an offshoot of the Communist Party USA[6]

John Pappademos, Illinois Federation of Teachers, was on the list.[7]

In the fight for the unity and integrity of the Party in St. Louis, Missouri, in the post-war years, "Red" has been a rock of confidence and commitment to building the Communist Party.

Greetings were sent from John Pappademos of Illinois[8].

Friends of the Peoples Weekly World

In 1997 John Pappademos was Missouri state organizer of the Communist Party USA.[9] 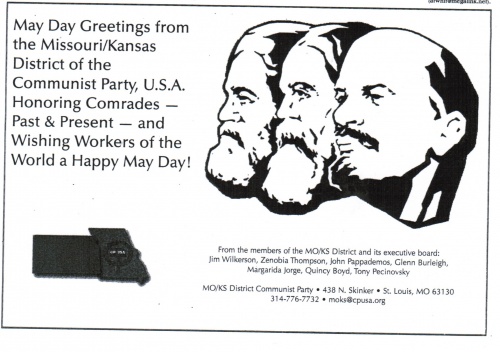 In 2007, members of the Communist Party's Missouri/Kansas District Executive Board were;

One of Pappademos’ areas of scholarly interest was the African origins of math and science. His paper, “An Outline of Africa’s Role in the History of Physics,” was published in Ivan Van Sertima’s seminal anthology, “Blacks in Science: Ancient and Modern.” He was also a contributor to the Journal of African Civilizations.

After his retirement from UIC, Pappademos and his wife moved to Nevada. He took a retirement job as customer service representative for an airline and participated in a drive to organize his co-workers into a union. He also was a regular distributor of the People’s Weekly World and wrote many articles for it.

Later Pappademos and his wife returned to St. Louis, where he served on the board of the Missouri/Kansas District of the Communist Party in addition to being on the party’s national committee. In May 2005, he was honored at the Missouri/Kansas Friends of the People’s Weekly World annual awards breakfast, where he received a standing ovation. He had just celebrated his 55th year in the Communist Party.