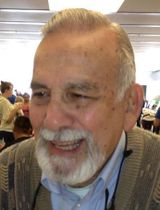 "Are labor unions becoming too powerful?"

As the AFL and CIO prepare for a historic merger, the Stanford Political Union investigates the question "Are labor unions becoming too powerful?" at a meeting Dec. 1 1955 in Cubberley Auditorium.

The issue will be debated by two guest speakers on opposite sides of the labor scene and by two Stanford students, beginning at 8. W. M. Caldwell, president Of the California Association of Employers, will team with senior Mike Hudson to present the affirmative side of the question.

Political Union President Ernie Hartz will introduce the speakers and the topic, which he believes is a "controversial and particularly timely question."[1]

In September 2006 the Peoples Weekly World[2]listed several members of the Communist Party USA.