John Braxton is a Pennsylvania activist.

John Braxton was saluted for his work with Jobs with Justice and U.S. Labor Against the War. Philadelphia’s Central Labor Council was one of the first in the country to pass a resolution against the Iraq war, and Braxton was instrumental in its passage. The labor council took out a full-page ad honoring him in the dinner’s program book.

Also honored were Miriam Crawford, a veteran activist with the Women’s International League for Peace and Freedom, and Jimmie Wayne Moore, a longtime promoter of the PWW in his church and community and on local radio talk shows.

Keynote speaker Adam Tenney, Young Communist League USA education director, linked the Iraq war to the “terrible violence” that has recently engulfed Philadelphia. The billions of dollars being spent on the war, he said, could fund better education, college tuition, more recreation and more jobs for young people, all of which would raise living standards and result in a drop in crime. [1] 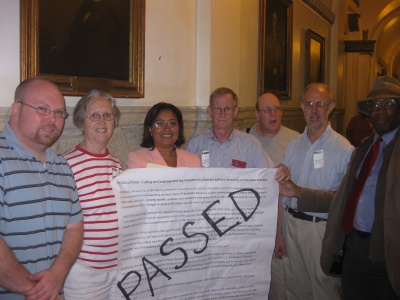 Philadelphia City Council, by a vote of 15-2, passed April 2015, a resolution "calling on the U.S. Congress to bring all U.S. troops home from Afghanistan, to take the funds saved by that action and by significantly cutting the Pentagon budget, and to use that money to fund education, public and private sector family-sustaining job creation, special protections for military sector workers, environmental and infrastructure restoration, care for veterans and their fammilies, and human services that our cities and states so desperately need."

Introduced by Councilmember Maria Quinones-Sanchez on April 12 with six other co-sponsors , the resolution was drafted by the Delaware Valley New Priorities Network, comprised of dozens of labor, neighborhood, faith, and peace organizations.

Report on a May 2018 delegation of US trade unionists, Black Lives Matter, and other social movement activists to trade unions in Korea, sponsored by US Labor Against the War and the Korean Trade Union Confederation. 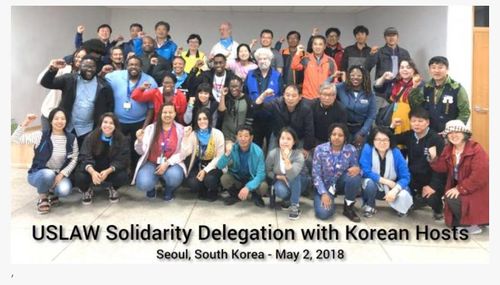 Labor Network for Sustainability (LNS) executive director Michael Leon Guererro reports on a delegation of US trade unionists, Black Lives Matter, and other social movement activists to trade unions in Korea, sponsored by US Labor Against the War and the Korean Trade Union Confederation.