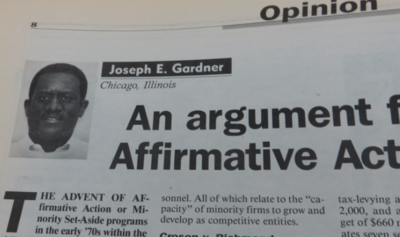 Joe Gardner contributed an opinion piece to the League of Revolutionary Struggle's Unity, May 30, 1990 issue.

In 1990, Joe Gardner, who helped forge the alliance among blacks, Hispanics and lakefront independents that twice elected Harold Washington, sought to revive the coalition.

Gardner, 46, Washington's former political director, isn't running for his mentor's old job. When approached last year by representatives of the Harold Washington Party about running for mayor, he took a pass. Instead of shooting for the top, the pragmatic Gardner is aiming for a lesser prize: city clerk. Gardner would rather win the clerk's office than make a symbolic mayoral bid.[1]

Madeline Talbott of ACORN was one of the key early organizers of the Chicago New Party.

She was also looking forward to meeting Ron Sable and Dan Swinney and reported that in May Dan Cantor held a New Party fund raising meeting in the Chicago home of Quentin Young, "with half a dozen good people present".[2]

As of May 11, 1992, Joe Gardner, a Commissioner of the Water Reclamation District had attended the founding meeting of Project Vote! Chicago Coalition, but had not been asked to fully commit until the next meeting.[3]

In late 1993 Progressive Chicago letters were always signed by 17 people;[4]

In June 1996, Joseph E. Gardner, 50, a second-term commissioner of Chicago's Metropolitan Water Reclamation District who ran for mayor of Chicago last year, died of cancer at his apartment in Chicago.[5]