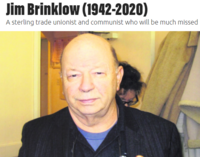 Jim Brinklow left school at 15 with no qualifications, first working as an apprentice jeweller. Wanderlust struck at age 16.

Jim became a sea cadet, later gaining certificates as an able seaman and a rigger, travelling around the world on merchant vessels.

In 1966 he jumped ship in New Zealand where he took up with Margaret, his landlady’s daughter. Jim started as a docker in Wellington, beginning his trade union life.

He and Margaret Brinklow married in 1967, the year they joined the Socialist Unity Party of New Zealand, a breakaway communist party founded in 1966 to take the pro-Soviet side of the Sino-Soviet split.

In 1969, their party sent them both to the School of Marxism-Leninism in Moscow for a six-month study course. This trip cost Jim his waterside job.

Back in New Zealand, he did six months at the Ngauranga Freezing Works until his seafaring qualifications landed him a job as a rigger with the Wellington Harbour Board Workers, who had their own trade union. He later became full-time secretary of the union. His militant leadership contributed to a permanent change in New Zealand foreign policy.

During the 1970s, widespread protests against French testing of nuclear weapons in the Pacific included a challenge at the United Nations International Court of Justice.

France agreed to stop testing after 1974, and the New Zealand government abandoned its case, declaring that any nuclear-powered or –armed ship would be welcome at any New Zealand port.

USS Truxtun, a US nuclear-powered warship, took up this offer. The harbour workers refused to tie it up or unload it, forcing it to anchor in the harbour basin and ferry its goods and sailors ashore.

The workforce went on strike for two weeks, returning to work when the ship slunk away. To this day, no nuclear ship has been allowed to dock at any New Zealand port, and in 1987 New Zealand’s land, sea and air became nuclear-free zones.

After Jim’s father died, to support his mother, he and Margaret migrated to Britain in 1979. They joined the Communist Party of Great Britain, and became active members of the British-Soviet Friendship Society.

Jim started in the engine plant at Fords in Dagenham. After a couple of years, that plant was shedding labour, transferring workers to the assembly plant.

The engine plant convener invited Jim to stay put and join his work gang for more money. Jim refused special treatment, saying: “I don’t jump queues, I have principles,” and followed his workmates to the assembly plant, where he was elected as a TGWU shop steward, safety rep, canteen rep and then deputy convener.

Fellow shop steward Ron Doel gave these anecdotes: “Jim played a huge role in stopping the use of apartheid South African fruit in the canteen and blocking imports of South African car parts, almost bringing about a strike in the process.”

“Management tried to sack a shop steward in the garage. Jim persuaded the garage workers to strike.”

Jim held many meetings in the plant on a wide range of issues, and Ron believed that the management were scared of Jim’s abilities to get union members to support disputes, making him a formidable adversary.

With a family history of early deaths from diabetes, Jim expected to meet the same fate, so at age 55 he retired early.

He took a course in sailing and radio control and even bought a boat. His eyesight started deteriorating, so he put the boat in his front garden, where it has remained a local landmark ever since.

Margaret and Jim joined Ron and his wife on a trip to Whitby, to see the Captain Cook Museum. It transpired that Jim knew more about Cook and his life at sea than the museum guides did, so they benefited from a good lesson that day.

Jim and Margaret became volunteer workers at the Morning Star office in east London for a decade or so. A decade ago he was elected treasurer of the Greater London East branch of the Communist Party of Britain, then served as branch secretary from February 2013 until his death.

At his funeral there were speeches from Jim’s family, from fellow shop steward Ron Doel and from his friend Tony Briscoe for the Communist Party of Britain.[1]