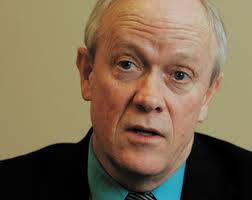 Jerry McNerney is a Democratic member of the United States House of Representatives, representing the 11th district of California.

Jerry McNerney wrote a letter of support to the Council on American-Islamic Relations (CAIR) on the occasion of their 24th anniversary in September 2018.[1]

The Council for a Livable World, founded in 1962 by long-time socialist activist and alleged Soviet agent, Leo Szilard, is a non-profit advocacy organization that seeks to "reduce the danger of nuclear weapons and increase national security", primarily through supporting progressive, congressional candidates who support their policies. The Council supported Jerry McNerney in his successful House of Representatives run as candidate for California.[2]

McNerney stoked controversy in his first term when he called for an end to criticism of MoveOn.org – the radical anti-military group that funneled over $50,000 into McNerney’s campaign coffers.[3]

Tim Carpenter claimed that Progressive Democrats of America had chalked up several achievements in its short life, successfully promoting initiatives by PDA board members John Conyers and James McGovern.

PDA is often referred to by Congressional Progressive Caucus Executive Director Bill Goold as the CPC’s field operation, because PDA has built relationships with members of Congress by delivering grassroots support for their initiatives – from Rep. John Conyers’ investigation of the 2004 Ohio voting fraud to Rep. Jim McGovern’s bill to cut off funding for the war in Iraq, a current priority effort.

While PDA is still only a progressive “pup” compared with big liberal dogs like MoveOn, PDA-backed candidates have taken some big bites out of conventional wisdom and centrist Democratic complacency. In Los Angeles, local PDA leader Marcy Winograd won 37 percent of the primary vote against entrenched pro-war Democrat Rep. Jane Harman with only two months of lead time. In Maryland, the dynamic Donna Edwards appears to have come only a few hundred votes short of toppling the multi-term Rep. Al Wynn in her first bid for public office, and she is seen as well-positioned to prevail in 2008. And in Illinois, with strong PDA support, Christine Cegelis, though outspent 8 to 1, nearly beat the candidate of the inside-the- Beltway Party leadership and Illinois party machine, Tammy Duckworth, to vie for the seat being vacated by Rep. Henry Hyde.

This fall, in the House, PDA is focusing attention and effort on several strong progressives worthy of note and support in hopes of flipping several seats from red to blue. In California, Jerry McNerney is running a strong race against an incumbent Republican. In Michigan, Tony Trupiano, with one of the nation’s strongest grassroots efforts, has his sights on an open seat in a Republican-leaning district. And in New York, anti-nuclear activist John Hall has won the Democratic nomination to challenge a four-term incumbent Republican. In Arizona, while the local PDA primary candidate, Jeff Latas, did not prevail, PDA will now enthusiastically join forces with PDA Board Member Rep. Raul Grijalva and support the nominee, the equally progressive Gabby Gifford, as well as PDA-backed Herb Paine, who won a razor-thin primary victory in a neighboring district.[4]

In the 2006 general election, Arshad Hasan worked as the GOTV Director for Jerry McNerney for Congress.

In 2016 Jacob Daruvala was Deputy Field Director at Jerry McNerney for Congress. 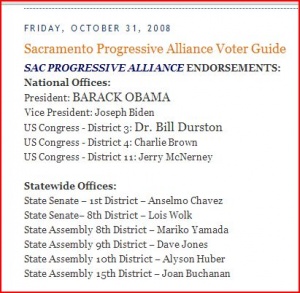 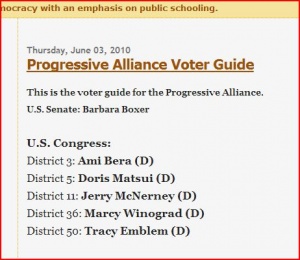 In June 2013 Progressive Democrats of America assigned activists to deliver their material to almost every US Congressman and several Senators. John Roe, was assigned as contact for Rep. McNerney.[5]

McNerney received $7000 in lobbying funds from Planned Parenthood in 2008.

In May 2013, Jerry McNerney was listed as an associate member the of the Congressional Asian Pacific American Caucus.[6]

“America’s diversity is a cause for celebration, as are the Council’s efforts at ensuring equal opportunites and representation for everyone.” -Rep. Jerry McNerney (D-Calif.) (September 2014) . [8]

Medicare For All Congressional Caucus founders