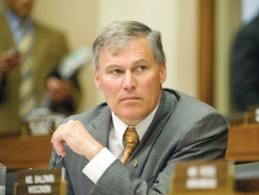 Jay Inslee is a Democratic member of the United States House of Representatives, representing the 1st district of Washington. Inslee ran for and won election to the position of Governor of Washington in the November 2012 election.[1]

Raised on the shores of Puget Sound, Jay Inslee comes from a long line of Washingtonians. His father Frank Inslee was a biology teacher and athletic coordinator, his mother Adele a homemaker and artist, and together they oversaw the Student Conservation Association at Mt. Rainer National Park. Jay would go on to begin his own public service as a State legislator and prosecutor in Selah, WA.[2]

Jay Inslee holds a bachelor’s degree in economics from the University of Washington and earned his law degree from Willamette University.[3]

Inslee has represented Washington State at the federal level for more than a decade – as representative for the 4th Congressional District from 1992-1994 and the 1st Congressional District since 1999 – writing and sponsoring legislation to create jobs in the new clean energy economy, reform health care, protect our environment, and expand access to high speed communications.

Jay Inslee "fought to restore protections for national forests and led a successful campaign in the House to keep limits on oil-tanker traffic in Puget Sound". Since 2005, Inslee has used his seat on the powerful House Energy and Commerce Committee to promote his vision for a clean energy future, the New Apollo Energy Act, and to advance other legislation that would reduce greenhouse-gas emissions. In March 2007, he was appointed to the 15-member Select Committee on Energy Independence and Global Warming. And in 2008, Jay co-authored, with Bracken Hendricks, Apollo’s Fire, Igniting America’s Clean-Energy Economy.[4]

The Council for a Livable World, founded in 1962 by long-time socialist activist and alleged Soviet agent, Leo Szilard, is a non-profit advocacy organization that seeks to "reduce the danger of nuclear weapons and increase national security", primarily through supporting progressive, congressional candidates who support their policies. The Council supported Jay Inslee in his successful House of Representatives run as candidate for Washington.[5]

Jay Inslee was on the list of 114 speakers (which included George Soros) at the 2004 Take Back America conference, which was organized by the Institute for Policy Studies, and Democratic Socialists of America dominated Campaign for America's Future.[6]

Jay inslee was a founder of the Apollo Alliance.

An unusual alliance of labor, environmental, civil rights, business, and political leaders today laid out a vision for a "New Apollo Project" to create 3.3 million new jobs and achieve energy independence in ten years. Named after President Kennedy's moon program, which inspired a major national commitment to the aerospace industry, the Apollo Alliance aims to unify the country behind a ten-year program of strategic investment for clean energy technology and new infrastructure.

The Alliance also announced that it has received support from 17 of America's largest labor unions, including the United Auto Workers, the Steelworkers and Machinists, as well as a broad cross section of the environmental movement, including the Sierra Club, the NRDC, the Union of Concerned Scientists, and Greenpeace.

The press conference was held as President Bush is expected to make a final push for his energy agenda, which was defeated under widespread criticism last November. The press conference was attended by co-chairs of the Apollo Alliance, Senator Maria Cantwell (by phone), Leo Gerard, president of the United Steelworkers of America, Carl Pope, executive director of the Sierra Club, as well as by California State Treasurer Phil Angelides, Congressman Jay Inslee (by phone), John Podesta, president of the Center for American Progress and Bracken Hendricks, executive director of the Apollo Alliance.

Dr. Ray Perryman, a corporate economist from Texas who prepared a detailed economic analysis of the proposal for a New Apollo Project said, "If economists agree on anything it's that inventing new technologies and creating whole new industries is what America does best. We are a creative economy, not a commodity economy. The New Apollo Project would keep us on the cutting edge of manufacturing emerging technologies and secure our long-term prosperity."

Perryman concluded that the proposed tax credits and investments would create 3.3 million new, high-wage jobs for manufacturing, construction, transportation, high-tech, and public sector workers, while reducing dependence on imported oil and cleaning the air. Perryman's analysis shows that a New Apollo Project would also position the U.S. to take the lead in fast- growing markets, dramatically reduce the trade deficit and more than pay for itself in energy savings and returns to the U.S. Treasury. Perryman's study was based on an input-output analysis of impacts on key industry sectors, using a highly regarded economic model and extensive survey data...

Rep. Jay Inslee (D-Wash.) said, "The New Apollo Energy Project is an opportunity for a bold new energy policy that can free us from our over-dependence on Middle East oil, expand the economy, and address environmental challenges. We should call for a total national commitment to harness the genius of America's can-do attitude that would design, invent and deploy the new clean energy technologies that benefit this new century. No single national endeavor has such capacity to expand our economy by tapping our innate and unique technological genius for innovation, and creating millions of new jobs."

In 2006, Jay Inslee, served on the National Advisory Board of the Apollo Alliance.[8]

On Jan. 27, 2010, U.S. Representatives Keith Ellison and Jim McDermott led 52 other members of Congress in signing a letter addressed to President Barack Obama, calling for him to use diplomatic pressure to resolve the blockade affecting Gaza. Jay Inslee was one of the signatories of the letter. [9] The entire letter together with a complete list of signatories can be read by clicking here. 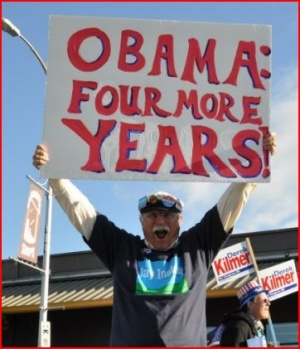 The Alliance for Retired Americans endorsed Inslee for Governor in 2012.[10]

The governors of nine U.S. states have sent a forcefully worded letter to the House and Senate leadership in Washington calling for an end to the 54-year U.S. trade blockade of socialist Cuba.

The text of the letter emphasizes the benefits that could accrue to U.S. industries, especially agriculture, and workers by greatly increasing U.S. trade with Cuba. The letters point out that although the sale of U.S. farm products has been allowed since the passage of the Trade Sanctions Reform and Export Enhancement Act of 2000, Cuba is still not allowed, under U.S. law, to purchase any U.S. products using credit mechanisms available to all other U.S. trading partners.[11]

On June 1, 1981, Domingo and Viernes, two young Filipino activists were murdered in Seattle in what was made to appear a gang slaying. The victims’ families and friends suspected that they were considered a threat to Philippine dictator Ferdinand Marcos and his regime’s relationship to the United States. In the days after the murders, they formed the Committee for Justice for Domingo and Viernes to investigate. In Summary Execution, attorney and author Michael Withey describes the 10-year struggle for justice waged by that committee.

Hanging with a socialist 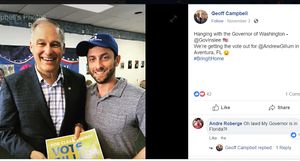 We did it! Governor Jay Inslee signed our Eviction Reform Bill into law Thursday! Now tenants will have the ability to present their case to a judge in eviction case, and instead of just getting three days notice, they will have 14. #HousingJustice #TenantPower #EvictionReform — with Gina Owens.