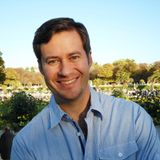 Harry Jay Hulings was in 2018, a Democratic candidate for Congress, TX-23. He is a close ally of Joaquin Castro and Julian Castro.

My grandfather, Robert Mendoza Garcia, grew up in Tucson, Arizona. He and his brothers and sisters were the first in their family to grow up speaking English. He had the opportunity to serve his country as an officer and fighter pilot in World War II. Thanks to the GI Bill, after the War, he earned an education and enjoyed a career as an accountant with the State of Arizona — a good middle class job. He raised my mother, Patti Garcia, to go forward and embrace America, which she did when she went to college and then joined the operations division of the CIA. She and my father served their entire careers undercover at the CIA, and raised me to believe in education and public service.

My family gave me the opportunity to graduate from a Texas public school, and then to attend Virginia Tech and Harvard Law. That education gave me the opportunity to serve as a national security policy advisor on Capitol Hill and then as an Assistant U.S. Attorney in President Obama’s Justice Department in San Antonio and Del Rio, where I put cartel leaders and corrupt politicians from both parties behind bars.[1]

Rep. Jane Harman sent Harry Jay Hulings to Cuba for 9 days in June/July 2008. The trip was courtesy of a $$1,668.00 grant from the Institute for Policy Studies connected Center for Democracy in the Americas... "To attend educational meetings and events focused on better understanding Cuba and U.S. policy toward Cuba" .[3]