Jason Kander was elected Secretary of State of Missouri in 2012, serving from 2013 to 2017. He previously served as a State Representative from Missouri representing District 44. Kander lost his 2016 Senate bid in Missouri. Jason Kander founded Let America Vote.

He lives in Kansas City with his wife Diana Kander.

His mother was a juvenile probation officer and his father was a police officer who later ran a security company. The Kanders shared their home with several boys in need and Kander came to call these other boys his brothers. After graduating with his brothers from Bishop Miege High School, Kander headed to college and law school in Washington, D.C. He graduated with honors from American University, where he majored in political science. He married his high school sweetheart, Diana, and together they graduated from Georgetown Law School.[1]

"In 2016, Jason ran for U.S. Senate in Missouri in one of the most competitive races in the country, and at over $75 million, the most expensive Senate race in state history. Jason’s campaign was bolstered by his viral gun control ad that showed him assembling a rifle blindfolded while making the case for expanded background checks."[2]

Jason Kander enlisted in the Army Reserve after 9/11 and served in an infantry unit before receiving his commission as a Military Intelligence Officer. In 2006, he left his Kansas City law firm and volunteered to deploy to Afghanistan, where, as a Second Lieutenant, he replaced a Lieutenant Colonel (an officer five ranks his senior) as the Political-Military Intelligence Officer for U.S. Forces. In that role, he conducted classified intelligence investigations regarding groups and individuals suspected of espionage, narcotics trafficking, corruption, and facilitating Al Qaeda and the Taliban.

He also commanded several convoy operations and joined a psyop special operations team on a four-day mission, but his primary role was to combat corruption among warlords in the Afghan government. In an unclassified evaluation, his commanders praised his willingness to volunteer for dangerous duty, describing him as an “outstanding leader” whose work saved lives. The U.S. Director of Intelligence in Afghanistan advised the Army to “track this officer’s career closely; he is one of the best.”

He transferred from the Army Reserve to the Missouri Army National Guard in 2007. Promoted to Captain in 2009, he spent nearly four years as a Senior Platoon Trainer at Fort Leonard Wood, where he prepared hundreds of new Army officers for leadership in combat. Kander earned national recognition for his service when he was selected as one of ten finalists for the 2010 Army Reserve Junior Officer of the Year Award by the Reserve Officer Association. He currently serves as an intelligence officer in an Aviation unit.[3]

A former Political Science Instructor at the University of Missouri-Kansas City, Kander is a trial attorney in a four-lawyer practice Barnes Law Firm in Kansas City.

He entered the legal profession on a pro bono basis prosecuting civil protection orders in domestic violence cases. A former associate in the litigation department at Spencer Fane Britt and Browne, his work at Barnes Law Firm has focused on civil justice claims – including many civil fraud prosecutions – and the protection of workers’ rights, representing individuals and organizations before courts in Missouri, Kansas, and Illinois.

Barnes Law Firm serves as designated counsel for the membership of the United Transportation Union (UTU) and Kander is a card-carrying member of UTU Local 933. Kander and his partners frequently litigate negligence cases against the major railroads on behalf of injured railroad workers. He was part of the legal team that represented the Kansas City Fraternal Order of Police during a card check process and historic recognition of their union by the Board of Police Commissioners.

He is an active member of several non-profit boards and professional associations.[4] 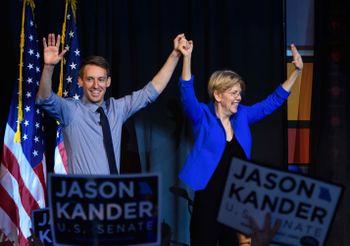 After he returned from Afghanistan in 2007, Kander began to think seriously about the human consequences of policies implemented for political reasons and the examples he witnessed overseas. Concluding that this same “politics first” mentality was to blame for many of the challenges facing Missouri, he finalized his decision to run for State Representative.

Just 26 years old when the campaign began, most viewed Kander as a long-shot candidate running against two established opponents in the Democratic primary. His competitors gained the overwhelming majority of the important endorsements in the primary, but he quickly became known to voters for his work ethic and his fresh, personal approach to campaigning. He went door-to-door from one end of the 44th district to the other three times and benefited from the efforts of over two hundred dedicated volunteers.

On August 5th, 2008, the hard work of the Kander campaign paid off when he won a surprise landslide victory (receiving 68.4% of the vote in the three-way Democratic primary). The Republican candidate withdrew early from the race, ensuring Kander the honor of representing 37,000 Kansas Citians in the Missouri General Assembly.

Kander's 2008 campaign earned wide praise from political commentators for its originality and organization as profiled in the book, “The Next Generation: Young Elected Officials and Their Impact on American Politics.”

He is currently working to pass the Veterans Workforce Act, which would expand efforts to hire veterans in state government and to provide unemployment benefits to military spouses who leave a job due to an involuntary transfer. He authored and passed a law to protect the parental rights of service members deployed overseas and later accepted an appointment to the Missouri Veterans Commission, where he is one of nine board members overseeing all programs serving our state’s military veterans.

In 2010, Jason ran for re-election, knocking on doors in his district just as he did in 2008. Despite a negative campaign by his Republican opponent, Jason stayed positive. His message, which focused on his record, resonated with Democrats, Independents, and Republicans, earning him a stunning 70% of the vote despite an electoral wave against his party.

Now in his second term, Jason sits on the Budget Committee, the Judiciary Committee, the Economic Development and Transportation Appropriations Committee, and the Special Committee on Downsizing Government.[8]

In late 2009, Jason Kander was one of more than 1,000 state legislators to sign a letter entitled "State Legislators for Progressive Health Care Reform". The letter was a project of the Progressive States Network and was developed in consultation with national health care reform advocates, including the AFL-CIO, AFSCME, Community Catalyst, Families USA, Herndon Alliance, National Women's Law Center, Northeast Action, SEIU, and Universal Health Care Action Network. The letter reads in part,[9]

"Failure to pass national comprehensive health reform now will further jeopardize state and local budgets, undermining public services like education, public safety, and transportation infrastructure... We, the undersigned, call on President Obama and the Congress to enact bold and comprehensive health care reform this year – based on these principles and a strong federal-state collaboration – and pledge our support as state legislators and allies in pursuit of guaranteed, high quality, affordable health care for all."

The MC for the program was Mary Armstrong, President of the St. Louis Teachers Union. Over 250 guests were in attendance. Congressman Clay stated “the upcoming election is the most important election in generations, this election is about you, your families and your future, and we need to turnout in massive numbers for President Obama and the Democratic Party State Ticket”.

CBTU Chapter President Lew Moye stated “we can win Missouri for President Obama with a massive turnout from the African American Communities.[10]