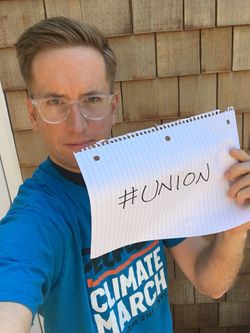 Jamie Campbell Henn is director of Fossil Free Media. He co-founded 350.org. He is the son of Catherine E. C. Henn, who is retired as vice president for corporate and legal affairs at The Boston Globe and John H. Henn of Cambridge, Mass, an arbitrator in private practice in Boston. He is married to Morissa Sobelson. People vs. Fossil Fuels, a project of Fossil Free Media "is organized by Build Back Fossil Free."[1]

I'm the director of Fossil Free Media, a nonprofit communications lab that supports the movement to end fossil fuels. We provide direct communications support to grassroots organizations, produce videos & other multimedia, run digital campaigns, fund investigative journalism, and lead our own, hard-hitting campaigns, like Clean Creatives, an effort to get PR and Advertising agencies to stop working with the fossil fuel industry.

Over my 12 years with 350.org, I helped grow the organization from a group of seven college friends and writer Bill McKibben to over 150 staff in more than 20 countries and hundreds of thousands of supporters around the world.

During that time I was a driving force behind some of the most successful climate campaigns of the last decade, including the fight against the Keystone XL pipeline, the People's Climate March, the fossil fuel divestment movement, the ExxonKnew campaign, the Global Climate Strikes, and more.

In 2020, along with launching Fossil Free Media, I helped start Stop the Money Pipeline, a coalition of over 150 organizations working to end the financing of fossil fuels.

Morissa Gayle Sobelson and Jamie Campbell Henn were married Sept. 29 on Thompson Island in Boston. Bill McKibben, who received a one-day marriage designation from Massachusetts, officiated, with Sue Halpern assisting with the Jewish elements of the ceremony.

She is a daughter of Carol Sobelson and Dr. Gary Sobelson of Concord, N.H. The bride’s father is a family physician at Concord Family Medicine and the treasurer of the American Civil Liberties Union of New Hampshire, both in Concord. Her mother is a family therapist at Capital Valley Counseling Associates in Concord. 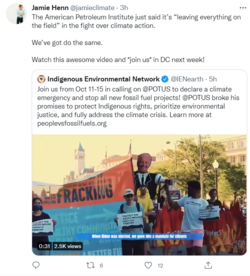 "JOIN US in Washington, D.C. To Demand a Fossil Free Future: From October 11 to 15, thousands of people will take action at the White House, participate in civil disobedience, and demand that President Biden choose a side: People vs. Fossil Fuels. Join us!

"For the first time in history we witnessed massive public mobilization asking for climate action when 600,000 people participated in the People's Climate March a month ago. What impact did it have on climate change negotiations? What could be done to mobilize millions for the 2015 COP summit in Paris? How could their influence be maximized to incentivize world leaders to sign a meaningful deal in Paris?

Jamie Henn was invited to the Resisting Trump Action Camp, which was organized by ResistJ20, described as a meeting "for anyone who is wanting to organize a blockade of a check points on the Day of Trumps Inauguration."