In the 1970s and '80s There were three Republican legislators who frequently lent their support to to left-wing causes: the two Senators from Oregon, Mark Hatfield and Bob Packwood and Congressman James Leach from Iowa.[1]

Voted against support for "Contras"

The Congressional Record of February 3, 1988 shows that the following leading mainly Democratic Party Congressmen voted against aid to the Nicaraguan Freedom Fighters - the "Contras"- then fighting against the Marxist-Leninist Sandinista government of Nicaragua:

Several US lawmakers even have rallied to the causes of American terrorists and terrorist collaborators arrested and imprisoned abroad. Lori Berenson, a member of the Marxist-Leninist Tupac Amaru Revolutionary Movement (MRTA) in Peru, was convicted and imprisoned in harsh conditions under the country's strict antiterrorist laws.

Her congresswoman from home, Rep. Carolyn Maloney (D-N.Y.), has interceded on her behalf; so have Reps. James Leach (R-Iowa) and Jim McGovern (D-Mass.). McGovern has allied himself with violent revolutionary movements since the 1980s, when he was a staffer for the late Rep. Joe Moakley (D-Mass.). He has helped the Farabundo Marti National Liberation Front (FMLN) in El Salvador, facilitating the shipment of material aid and American volunteers for the Cuban-backed group's rural civic-action efforts, according to documents and letters he signed in the 1980s that Insight has obtained. [2]

The Pro Democracy Convention was held June 29th To July 1, 2001. It started with a National Town Hall Meeting, Annenberg Center, University of Pennsylvania.

lawyers, organizers, and elected officials, speak out about Election 2000, recommendations for electoral reform, and how we all can build the movement to expand democracy in the U.S. Partial List of Invited Speakers and Presenters:

The Council for a Livable World, founded in 1962 by long-time socialist activist and alleged Soviet agent, Leo Szilard, is a non-profit advocacy organization that seeks to "reduce the danger of nuclear weapons and increase national security", primarily through supporting progressive, congressional candidates who support their policies. The Council supported James Leach in his successful House of Representatives run as candidate for Iowa.[4] 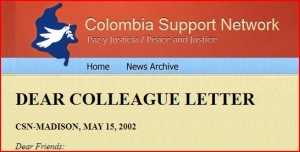 The letter called on President Pastrana to end a military blockade on the Colombian town of San Jose de Apartado, a sister community of Madison Wisconsin, where the Colombia Support Network is based.

We write to you to bring your attention to the humanitarian crisis facing the civilian population of the Peace Community San Jose de Apartadó and its outlying settlements.

We urge the appropriate authorities of your government to dismantle the paramilitary checkpoint on the road between San Jose and Apartadó, ensure the continued safety of the road, and fully investigate recent threats and attacks on the Peace Community.

The Peace Community San Jose de Apartadó and its settlements, including the village of La Union, receive the permanent accompaniment of international organizations.

These include Peace Brigades International (PBI), as well as the U.S. Fellowship of Reconciliation (FOR), which currently has two US citizens in La Union. We support the work of these two respected organizations as well as the Peace Community in its effort to build a non-violent alternative to the conflict.

In July 2009 James Leach was nominated[6]by the Obama administration for the position of Chairman in the NEH and confirmed in August 2009.

In 2009, Former Congressman James Leach (R-Iowa), now Visiting Professor of Public and International Affairs at Princeton University, was the latest Obama nominee with ties to the Committee of 100. Leach, who has been a member of the Committee’s Advisory Council, was nominated to head the National Endowment for the Humanities, a $155 million federal agency which has been critical in supporting academic and public programs in the humanities (including Chinese studies and language). A Republican who endorsed Obama and spoke at his nominating convention, Leach had founded the Congressional Humanities Caucus that sought to counteract attacks against NEH during the 1990s. Leach was selected as a Committee of 100 Advisory Council member for his expertise in international and Asian affairs, gained in his role as Chair of the House Subcommittee on Asia and the Pacific.

Leach, like the three other C-100 members and advisors joining the Administration, General Eric Shinseki (Secretary of Veterans Affairs); Ivan Fong, General Counsel, Department of Homeland Security; and Gary Locke (Secretary of Commerce), will resign from Committee participation to avoid any conflict of interest.