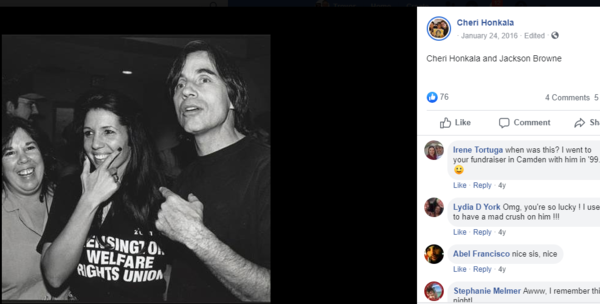 In 1994 Jackson Browne was an initiator of the International Peace for Cuba Appeal, an affiliate of the Workers World Party dominated International Action Center.

We, Actors and Artists United for the Freedom of the Cuban 5, want to extend our deepest gratitude for your recent visit to Cuba, as well as our support for your statements promoting improved relations between our countries.

Your call for the release of Gerardo Hernandez Nordelo, Antonio Guerrero Rodriguez, Fernando Gonzalez Llort, Ramon Labanino Salazar, and Rene Gonzalez Sehwerert, known as the Cuban 5, and your willingness to visit with their family members in Cuba mean a great deal to all involved. We strongly agree that there is no reason to keep these men, who were simply trying to protect their country from terrorism, imprisoned any longer...

Further, we enthusiastically support you in having subsequent discussions with President Obama and Secretary of State Hillary Clinton and hope you will call for urgent action on their part to make right this unjust situation.

Again, we thank you and look forward to the possibility of improved relations and future visits to Cuba. 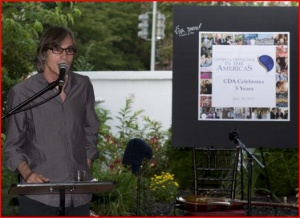 Jackson Browne introduced Carlos Varela, at the Center for Democracy in the Americas, 5th Anniversary celebrations in June 2011.[5]

The Center for Democracy in the Americas was proud to lead a delegation in partnership with the Ocean Elders, an independent group of global leaders who joined together to serve as a catalyst in the conservation and protection of the ocean and its wildlife, to Cuba from December 5 to 10 2016. The delegation included five Ocean Elders: Dr. Sylvia Earle, Don Walsh, Graeme Kelleher, Jackson Browne, and Queen Noor of Jordan, as well as Michael Holland (Ocean Elders Council of Advisors) and Ocean Elders founder Gigi Brisson. The Ocean Elders delegation visited the National Center for Protected Areas (CNAP), the Cuban Academy of Sciences, the Marine Research Center at the University of Havana, the National Aquarium, Zapata Swamp, the Center for Fisheries Research, the Lizt Alfonso Dance Cuba School, and met with US diplomat Jeffrey DeLaurentis, Cuban economists, artists, and several private entrepreneurs. This trip marked the beginning of a long-term relationship and partnership between Ocean Elders and Cuban scientists.[6]