Hunter Pitts (Jack) O'Dell died October 2019 aged 96. Served on the Advisory Board of the Committees of Correspondence for Democracy and Socialism.

Hunter Pitts O'Dell was born in Detroit, Michigan on August 11, 1924. His father George Edwin O'Dell worked in hotels and restaurants in Detroit and his mother, Emily O'Dell, attended Howard University where she studied music and later taught adults to play classical piano. O'Dell's grandparents played a pivotal role in raising him during the turbulent 1930s and he took his grandfather's nickname, "Jack," as his own in order to pay homage to him. O'Dell's witnessing of racial violence, labor strikes, and social unrest during this period led to his interest in labor and social reform issues.[1]

O'Dell left Michigan after high school to attend Xavier University in 1941 in New Orleans, where he studied pharmacology. He abandoned his studies in order to enlist in the Merchant Marines and fight for the United States in World War II. It was during this period that he became exposed to a variety of progressive and leftist thinkers of American and European origin. He also joined an integrated union (the National Maritime Union) and became involved in a variety of civil rights activities. One of these included organizing hotel and restaurant workers in Florida in 1946.[2]

In 2018 South Carolina Progressive Network published a booklet, HISTORY DENIED: Recovering South Carolina's Stolen Past by Becci Robbins. Its content is a substantive introduction to the Southern Negro Youth Congress (SNYC) and the vanguard radical labor organizing among interracial youth in the severely segregated South between 1937 and 1949. Specifically, this tells of a landmark Congress convened in Columbia, South Carolina in October of 1946.

This event had in active participation such Freedom Movement notables as local South Carolina youth leaders in addition to Paul Robeson, Herbert Aptheker, Dorothy Burnham and Louis Burnham, Esther Jackson and James Jackson, Louise Patterson, Sallye Davis, Jack O'Dell, South Carolina's Modjeska Simkins and the Congress' Keynote Speaker, Dr. W.E.B. DuBois, who gave a speech, BEHOLD THE LAND, which "has been a must read' for all young activists ever since".[3]

In the 1950s, at the height of McCarthyism in the United States, O'Dell's membership in the Communist Party USA led to his expulsion from his union. He remained, however, one of the most energetic and vocal community organizers in the South. He found it difficult to sustain employment because of the number of federal investigations into his political views. O'Dell's work in the South in the 1950s introduced him to nonviolent resistance as a tactic of the civil rights movement.[4]

While involved in planning the 1959 youth march on Washington for integrated schools, O'Dell became acquainted with major civil rights leaders and strategists such as Martin Luther King, A. Philip Randolph, and Stanley Levison. O'Dell joined King's Southern Christian Leadership Conference (SCLC) and was particularly active in planning its successful Birmingham campaign in 1963. That involvement, however, allowed opponents to attack movement as "communist" controlled.Recognizing that his continued involvement with King and the Southern civil rights movement would continue to be a distraction and a problem for SCLC, he resigned from the organization late in 1963.[5]

In the 1960s O'Dell became an advisor to Martin Luther King. He was simultaneously serving on the National Committee of the Communist Party USA under the pseudonym of "Cornelius James."[6]

On April 28, 1966 Jack O'Dell was a sponsor of the Herbert Aptheker Testimonial Dinner. The dinner was held on the occasion of Herbert Aptheker's 50th birthday, the publication of his 20th book, and the 2nd anniversary of the American Institute for Marxist Studies. It was held in the Sutton Ballroom, The New York Hilton, Avenue of the Americas, 53rd to 54th Street, New York City. Most speakers, organizers and sponsors were known members or supporters of the Communist Party USA.[7]

Jack O'Dell continued to be a political activist. He spoke out against the Vietnam War, supported Eugene McCarthy in the late 1960s, worked on Jesse Jackson's 1984 presidential campaign and was involved in a number of civil rights and community organizing events in New York and other cities across the United States.[8]

Heather Gray served on the board of the Southern Organizing Committee for Racial and Economic Justice that Anne Braden co-chaired along with Reverend Fred Shuttlesworth. The organization " was one of the few that provided the opportunity for us to think and act regionally and to make the essential connections of the myriad of issues we faced. From the 1980’s and on the meetings were always filled with a diversity of black, white and eventually Latino activists in the region".

We would sit for hours in New Orleans, Montgomery or Birmingham to strategize on various issues, activities and mistakes we’ve made then and in the past. We would also listen, learn and occasionally join in while the legendary leaders in our midst discussed and analyzed the dynamics of white supremacy, racial politics generally and labor challenges in the South. Anne was never without offering a lengthy epistle about anything until the wee hours of the night along with her ever-present cigarettes! These sessions were often both grueling and enlightening. They were not only a history lesson but also a socialization process into the tactics of southern civil rights activism and Anne understood the importance of this. She wanted to pass this information on to all of us and to keep the momentum going at every conceivable juncture. The meetings were a roll call of southern leaders and activists the likes of Reverend C. T. Vivian, Jack O'Dell, Gwen Patton, Virginia Durr, Reverend Fred Taylor, Reverend James Orange, Connie Tucker, John Zippert, Jackie Ward, Reverend Benjamin Chavis, Charlie Orrock, Ann Romaine, Damu Smith, Jim Dunn, Judy Hand, Scott Douglas, Ron Chisholm, Spiver Gordon, Pat Bryant, Tirso Moreno and countless others.[9] 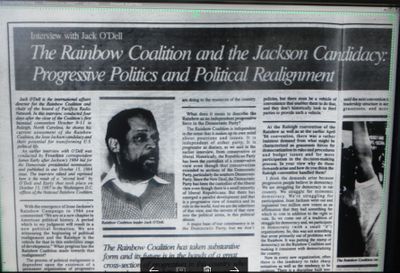 A principal advisor to Jackson for more than 20 years was Jack O'Dell. O'Dell assisted Jackson during his campaign for the Presidential nomination. He was International Affairs Director for Jackson's Operation PUSH in Chicago from the early 1960s onwards, and later for Jackson's Rainbow Coalition, where he served into at least the late 1980s.

After leaving SCLC, Jack O'Dell came to work with Rev. Jesse Jackson in the establishment of Operation Breadbasket and PUSH in Chicago; thereafter, he worked closely with Jackson during his presidential runs and in building the Rainbow Coalition. O’Dell not only played a critical role in developing strategic politics for the Rainbow, he also played an important role in bringing an internationalist perspective to Jackson, especially around the Mideast and the need for justice for Palestinians. Gene Bruskin, a longtime union activist and later the lead organizer with UFCW’s Smithfield organizing drive, had been on the Rainbow staff coordinating its work with unions and, in that capacity, he often met with O’Dell.[11]

Behind the scenes staff 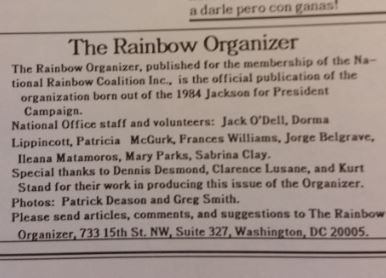 Special thanks for helping with this issue were extended to Dennis Desmond, Clarence Lusane and Kurt Stand.

In the late 1970s, the Information Centre of the Soviet front World Peace Council, Helsinki Finland, published a booklet naming members of the organization, worldwide.[12]

We publish in this booklet a list of members of the World Peace Council elected at the Council's Session in Warsaw in 1977.

On February 11 1984, Noam Chomsky addressed "The War Danger and the Lebanon Crisis-Issues For The US Peace Movement" conference, organized by the American-Arab Anti-Discrimination Committee, held at the United Methodist Building Conference Rooms, Washington, DC.

An ad/notice was placed in the Guardian, November 8, 1989, concerning an upcoming U.S. Peace Council national conference. The text of the notice was:

In 2012 Jack O'Dell served on the Board of the Vietnam Agent Orange Relief & Responsibility Campaign.[15]