Formally, even as a non-member of DSA, I was an active participant developing relationships with DSA member(s) and connecting TC DSA to the greater left community in the Twin Cities. In my official capacity as a DSA member, I have met with prospective members and also have been the primary relationships with new members. It's also important to note that, some of these new members do not fit the traditional membership base of DSA. In the past few months, I have also guided our labor branch and brought forth analysis that's been instrumental in changing TC DSA institutional dynamics and mission.

I currently have about ten years of organizing experience in formal professional and community settings. My organizing started in one of the most conservative regions in the country in Minnesota's 6th Congressional District. Saint Cloud is a heavily white-working class city embedded with generations of class and race resentment. The experience and exposure of living in St. Cloud shaped much of my language around liberation theology and the words around the class struggle. Known for its deep racial resentment, I started much of my work in St. Cloud organizing around issues about race, and also began my professional career as an Organizer through the Minnesota Democratic-Farmer-Labor Party (DFL) and Student's United (student union for all four-year institution in Minnesota). During this time, I also organized with the support of Black Lives Matter Minneapolis Chapter and led some of our work in St. Cloud. The past few years, I have also been an organizer with SEIU 284 and with Saint Paul Federation of Teachers (SPFT) and have developed a broader coalition of relationships and networks not only in the Twin Cities but globally. Currently, I serve as the Organizing Director Congressional District 4 in Minnesota for the DFL and have a good grasp in the field of operations, relationship buildings.[1]

Isuru Herath is a labor organizer and Minneapolis resident who lives in Ward 9. When he saw the heated challenges on delegate eligibility between Council Member Alondra Cano, and opponents Mohamed Farah and Gary Schiff – Herath was frustrated. The endorsement process had stirred up a fight without engaging voters or discussing real issues affecting the ward.

“You have a situation where the system is set up so that you have in-fighting between marginalized people,” he said. “It’s a tactic of white supremacy to divide and conquer.”

Herath is no stranger to DFL politics. During the 2014 election cycle, he was an organizer for the DFL, working mostly in the St. Cloud area. He was hired as a regional director for the party in 2016, but he quit after only a week and has not returned to politics since. Herath said one of the main reasons he quit was a lack of authentic engagement from the party to communities of color.

“Voter engagement for them was never about sitting down and talking about race, or patriarchy or capitalism and realizing collective power. You’d go up to someone’s door, tell them that this person will save us and to go vote,” Herath said. “The language in the office would always be ‘We need Somalis, we need Hmong, we need Hispanics to win this campaign, but only ever in terms of votes, not in changing the system.”[2]

Isuru Herath, August 11, 2018. · We are proud to announce that the MN DFL Coordinated campaign joined our rank and file campaign workers across Minnesota and the nation to be recognized as a union with the Campaign Workers Guild (CWG).

We appreciate the support from the Muphy campaign and the immediate recognition by the DFL. We are proud to join the rank and file movement! We are a UNION! — with Carlos Garcia Velasco, Nathan J. Lewicki, Deonte Horton, Jamila Mame, Lacie Matthews, Abdulrahman Wako, Jared Michael, Kong Pheng Xiong, Austin Muller, Jacob Potter, Margret Ritschel and Maeve Olson. 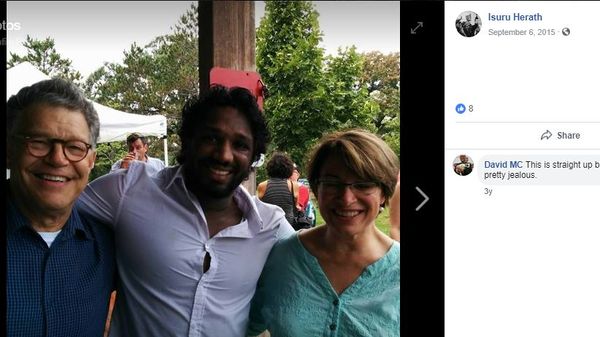