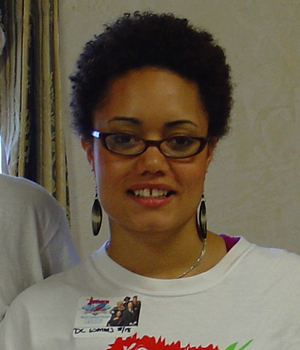 Irene Bianca Schwoeffermann is a former student activist, from Oregon.

From 2004 to 2006 Irene Schwoeffermann was Director of the Student of Color Campus Diversity Project of the United States Student Association Foundation in Washington, DC.[4] 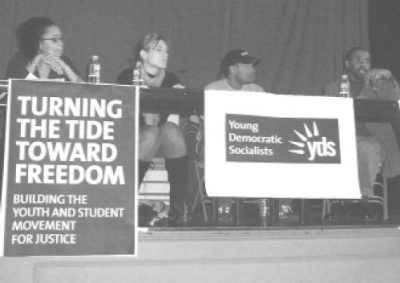 The Young Democratic Socialists’ winter conference, cosponsored by the Columbia University Working Families Party chapter, was held February 17-19 2006, in New York City. It was entitled "Turning the Tide Towards Freedom: Building the Youth and Student Movement for Justice."

In 2009 Irene Schwoeffermann was a shared employee in the offices of Rep. Andre Carson, and John Conyers.[7][8]

In 2010 Irene B. Schwoeffermann, was Coalitions Director of the Congressional Black Caucus.[9]

Coalition for a Livable Future

In 2011, Irene Schwoeffermann was on the staff of Coalition for a Livable Future in Portland, Oregon.[10]

Irene recently returned to the Portland region from Washington, DC, where she worked for national non-profit organizations and on Capitol Hill. A graduate of Howard University, Irene's personal and professional experience includes community activism, electoral mobilization, public policy and political strategy. In addition to working at CLF, Irene is a member of the Portland Alumnae Chapter of Delta Sigma Theta Sorority, Inc., where she assists with the June Key Delta Community Center. 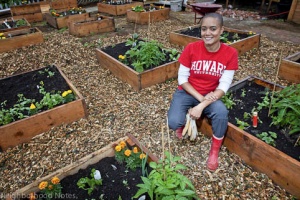 The neighborhood surrounding the Peninsula Park Rose Garden, i is about to look a lot greener. Neighbors of the June Key Delta Community Center, located on the corner of N Albina and N Ainsworth, Portland, Oregon, have watched the Living Building Challenge remodel of the gas station since last August, but on May 29 neighbors noticed hard hat-clad volunteers preparing the land for a garden on the lot adjacent to the ongoing project.

The garden won’t be plotted out and sold to the community. Instead, Delta Sigma Theta, the organization that owns the gas station and the land, will use it as a tool to teach healthy eating habits, urban agriculture and sustainable living practices. The June Key Delta Community Center says the garden will “serve as a demonstration of how African-American communities heavily burdened by health disparities such as hypertension, high cholesterol, diabetes, and obesity can work together.”

Irene Schwoeffermann, gardening coordinator, says the garden is “a way for us to teach [neighbors] how to garden and also help them have a better understanding of where their food comes from.”

Supporters and volunteers included members of the Delta Sigma Theta sorority and Greek organization, members of the community and neighbors, and Hands on Portland. Friends of Trees, Portland Nursery, Naomi’s Organic Farm supply and many other donors supplied the plants for this community garden.

Schwoeffermann says that the garden can serve as a demonstration for those whose don’t currently garden but observed gardening in the generations before them.

“A lot of members of the African-American community here, they have roots that aren’t that many generations back from somewhere else in the county where their family was sharecropping or lived on a farm or gardened regularly, so what we’re really trying to do is encourage people to readopt those practices,” Schwoeffermann says.

Working on the Living Building project corresponds with Schwoeffermann’s studies in sustainability at Portland State University and allows her to participate in community building as a member of the Delta Sigma Theta sorority.

“It’s been amazing to be around and have people come through and talk about being raised in Alabama and everything they were able to get from their family’s garden, and they’re excited about seeing that connection being built back,” Schwoeffermann says.[11]