Iowa Citizens for Community Improvement is based in Des Moines Iowa.

The vision of Iowa Citizens for Community Improvement was born, in the rectory of St. Joseph’s Catholic Church in Waterloo. Iowa CCI was conceived by a handful of clergy who believed that ordinary people, when given the chance, can be a powerful force for justice.

Today that spirit of justice marches on through the work of thousands of Iowa CCI members like you, across the state, who continue to tackle tough issues and get things done.

CCI in 1977 We got our start in Waterloo in 1975. We quickly grew to include Cedar Rapids, Council Bluffs, Des Moines, Dubuque and Sioux City. We began to build our people power by showing what was possible largely through organizing around local and neighborhood issues – we put people first on issues of abandoned housing, use of city funds and slum landlords.

Iowa CCI in the 80's Becoming truly statewide, our organizing branched out to include farmers and rural residents in addition to Iowa’s metropolitan cities. We began looking for organizing issues that cut across the state and focused on larger targets. We put people first on issues of high utility rates and farm foreclosures.

The 1990s – Here to Stay Iowa CCI in the 90's We made two of the “best decisions we’ve ever made” – we became a dues-paying membership organization and we bought our own office building. Both moves signaled that Iowa CCI will be putting people first in Iowa for the long haul. We helped urban residents reclaim their neighborhoods from drug dealers and rural residents fight corporate-backed factory farms.

CCI in the 2000's We began to bring people together around a common vision – still about issues that hit home, but we began articulating a broad economic, environmental and political justice vision for the state. We reached out to immigrants in our community; we took on predatory mortgage lenders; and we put our work squarely on the national level by hosting the Heartland Presidential Forum in 2007.[1] 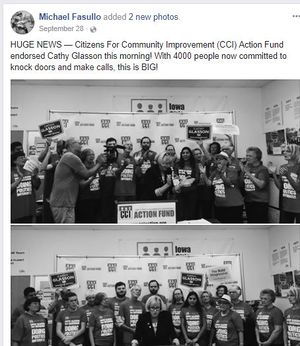 Hugh Espey, executive director of Iowa Citizens for Community Improvement has been doing social justice work in Iowa since the 1970s. He pounds the table as he talks about how the Democrats have talked a great game for decades, but done little. “I am sick and tired,” he says, “of being sick and tired of being fucked over by bullshit promises on the campaign trail.”

This election cycle, Espey thinks things will be different. “That right there,” he says, jabbing a finger toward a photograph in a photocopied article on the wall of CCI’s offices. “That right there is a movement candidate.”

The GOP’s aggressively antilabor agenda has inspired CCI to set up a PAC and take its first plunge into state-level politics, working on behalf of Glasson. She fits the 43-year-old community organizing group’s vision of movement politics: Her candidacy emerged from her role as president of SEIU Local 199, which represents healthcare and education workers in 20 bargaining units across the state. And she foregrounds issues that her six Democratic opponents shy away from: Big Ag’s role in Iowa’s water pollution problems, for example, and the need for single-payer, universal healthcare.[2]