Harvey Smith is an engineer and a North Carolina Communist Party USA member. He is the father of Tanya Smith, husband of Jane H Smith.

In 2014, Harvey Smith was listed a a friend on the DuBois Clubs Facebook page.[1]

Thoughts on the party in the South

Harvey Smith wrote to the Communist Party USA in March 2007;

Chairman Webb's analysis is right in line with the new realities which the world and the party finds itself. As a transplanted 'Yankee' living in the south I don't see much activities from the party. This area is in transition and fighting the backward right to work laws. I would really like to see a push and focus on the south as I think the time is right. Harvey Smith North Carolina.[2] 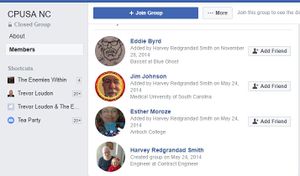 Ideological Fightback is the journal of the National Council of Communists, USA.

As of May 2014. Board of Directors (In Formation) consisted of;

USFSP Board of Directors

As of April, 2013, Harvey Smith served on the Board of the U.S. Friends of the Soviet People.

Closed working group for the African American Equality Commission of the CP USA. This is a space for members of the commission to brainstorm, communicate, and work through ideas between official meetings.[5].

CPUSA Environmental Action is a Facebook closed group. It is "a meeting place for members and friends of the Communist Party USA to discuss environmental issues (especially climate change), share information, and coordinate activities".

According to the Facebook page for the event, those who attended included Harvey Smith.