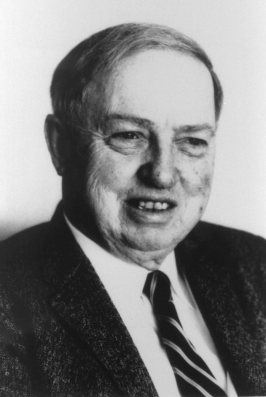 Dr. Harlow Shapley (born Nov. 2, 1885 in Nashville, Missouri, died 1972) was the son of Sarah Stowell and Willis Shapley. He married Martha Betz. He is famous in the world of astronomy for proving that our solar system is at the outer fringe of the Milky Way. In the world of fellow travelers (Communist sympathizers), he is famous not only for his front activities but also for his active support of Communist projects and enterprises, individual Communists, and a pro-Communist foreign-policy.[1]

The Federation of American Scientists was founded in 1945 by scientists who had worked on the Manhattan Project to develop the first atomic bombs.

Hans Bethe, was one of the founders of FAS.[3] Leo Szilard, Philip Morrison, Richard L. Meier and Harold Urey[4] were others.

FAS was founded from the merger of thirteen smaller groups. It started with a membership of more than 2,000 scientists and an advisory panel that included Robert Oppenheimer, Harold Urey, Harlow Shapley, Smyth, Leo Szilard and Edward U. Condon.[5]

American Association for the Advancement of Science

Shapley was elected president of the American Association for the Advancement of Science in 1947.[citation needed]

Harlow Shapley was a sponsor of the Scientific and Cultural Conference for World Peace which ran from March 25 - 27, 1949 in New York City. It was arranged by a Communist Party USA front organization known as the National Council of the Arts, Sciences, and Professions. The conference was a follow-up to a similar gathering, the strongly anti-America, pro-Soviet World Congress of Intellectuals which was held in Poland, August 25 - 28, 1948.[6]

In 1956, the Senate Internal Security Subcommittee included Shapley's name in its list of the eighty-two most active and typical sponsors of Communist front organizations. Shapley's affiliations have included the following organizations:[1]

As of May 1964, Harlow Shapley Astronomy Emeritus, Harvard University, was listed as a sponsor of the Communist Party USA front, National Committee to Abolish the House Un-American Activities Committee.