Template:TOCnestleft Gordon Mar is a longtime Bay Area social justice organizer and activist. He currently serves as Executive Director of Jobs with Justice San Francisco, a strategic alliance of community and labor groups working together to build the economic justice movement locally and nationally. Gordon has previously served as director of the Chinese Progressive Association (San Francisco), the Northern California Citizenship Project and the Bay Area Environmental Healthy Collaborative. He and his family live in San Francisco.[1]

Open Letter to the Biden Campaign on “Unprepared”

Open Letter to the Biden Campaign on “Unprepared” was released May 12 2020.

":Our demands: The country’s greatest priority at this moment is to beat the COVID-19 crisis, and this requires embracing principles of antiracist solidarity and international cooperation. The Biden campaign can and should beat Trump and the GOP with a message centered on our real public health needs and the progressive values that are required to meet those needs. The “Unprepared” ad must be taken down, and all campaign messaging that fuels anti-Asian racism and China-bashing must end. We refuse to allow the Biden campaign to sacrifice our dignity in the name of political expediency."

In 1989 Gordon Mar, and Karega Hart, contributed an article "Aftermath of the "89 quake" to the League of Revolutionary Struggle's Unity October 16, 1989.

Bay area Asian American community organizations sponsored a forum in Chinatown that make the link between U.S. imperialism and racism against Asians in the U.S., July 8, 2001. Three Chinese American activists, involved in the Asian American movement from the 1960's to today, spoke about the spy-plane drama that unfolded with China earlier this year.

There was a strong turnout of over 75 people, including Chinatown residents and Asian American activists whose experience ranged from being veterans of the 60's and 70's to new fighters in the struggle. The panelist spoke in English with Cantonese translation, followed by smaller group discussions in Cantonese and English.

A strong anti-imperialist breakdown of U.S.-China relations was presented. Monica Wayie Ly, who is active in Asians and Pacific Islanders for Community Empowerment (API FORCE) said, "Since Bush stole office, there has been an increase in hostility toward the People's Republic of China and Chinese Americans. The U.S. ruling class sees China as an obstacle to total global domination."

Ly also noted, "The spy plane incident is not an isolated incident. The U.S. promised arms to Taiwan, scapegoated Wen Ho Lee, and bombed the Chinese embassy in Belgrade, Yugoslavia."

Historically, China has had great importance for Asians in America. From the time when the first Chinese came to America in the 1850's, the connection to China was strong, due to national oppression that kept them from fully participating in American society. In the 1960's, People's China had a huge impact on the Asian American movement. "It was a time to be proud of China's accomplishments. It helped us to organize," said Patsy Chan, a former member of I Wor Kuen, a revolutionary Asian American organization inspired by the work of the Black Panther Party and other Third World people's liberation struggles.

"Mainstream Asian American organizations oppose racism, but won't make the link to U.S. and corporate policy abroad," said Gordon Mar, a long time community activist and former director of the Chinese Progressive Association (San Francisco). While these mainstream organizations object to the increased racism of the American public and media towards China and Chinese Americans, they also try to distance themselves from China by encouraging Asian Americans to become more patriotic and to express their loyalty to the U.S.

The forum's message directly countered the belief that Asian Americans need to prove our worth in this country. We're here because the U.S. was in our homelands. The message our community needs to hear is that as long as U.S. imperialism rules in Asia, Asians living in the U.S. will be denied true equality and continue to face national and racial oppression. Rather than distancing ourselves from Asia, we need to find ways to unite our struggles.

Towards a Progressive Agenda for SF

Towards a Progressive Agenda for SF: A Progressive Vision for the November Elections and Beyond, Wednesday, September 22nd 2010, Center for Political Education.

What is our progressive vision for an economically just city? How do electoral strategies play into the broader movement for building grassroots power, developing people’s consciousness, and creating more democratic structures? Will progressives be in a position to shape the mayoral race in 2011?

“Towards a Progressive Agenda for San Francisco” will bring together San Francisco Rising, SF Jobs with Justice, and the “New Deal for the City” Community Congress, to engage in a lively roundtable discussion about how these projects complement each other, in the context of the city’s ongoing fiscal crisis, the November 2010 elections, and beyond. We will discuss, among other topics, progressive revenue measures in November; developing labor-community alliances through Jobs with Justice, a platform for low-wage workers; the Congress’s economic development and budget reform agenda, and bringing a progressive vision to the critical District races in 6, 8, 10. Finally, we will hit some tough questions about developing strategies for common work, keeping elected officials accountable, and looking to the future. Panelists include:

This is the second in an ongoing Center for Political Education series on building a San Francisco progressive agenda, following our July 2009 event about the history of District Elections and the broader movement to shape a progressive agenda.[3]

April 2011, Gordon Mar, was leading the protest against Wal-Mart.

He and a few dozen supporters, including Supervisors John Avalos and David Campos, gathered to let the big-box retail chain know it isn’t welcome in San Francisco.

“Now we’re the only place where they can expand their race-to-the- bottom model,” said Gordon Mar, coordinator with Jobs with Justice San Francisco and a resident of the Sunset District.[4]

Kicking off Stop the Evictions

[[On Saturday, October 7, 2017, the Chinese Progressive Association (San Francisco) will celebrate our 45th anniversary with the theme, “Harnessing the Strength of a Thousand Rivers. 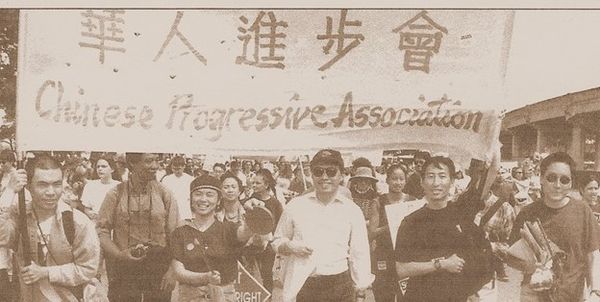 "My involvement in educational justice work began when I joined the Chinese Progressive Association (San Francisco) in SF's Chinatown in 1984. My twin brother Gordon Mar [in the picture on the far right] had been active in the Asian Student Union at UC Berkeley and joined CPA a few years earlier. He is now the Executive Director. Former Emeryville Unified Superintendent Henry Der is to my right, in the middle of the photo. At the time Henry was director of Chinese for Affirmative Action. He is now a senior program office for the Evelyn and Walter Haas, Jr. Fund. Burton High School teacher Eric Chow is to the far left.

In 1987 CPA organized thousands of students, parents and community folks to March on Sacramento for bilingual education, Ethnic Studies, adequate funding, equal opportunities to learn and against the racism and anti-immigrant sentiment of the period.

We also dabbled in electoral politics during the Rainbow Coalition campaigns of 1984 and 88 as well, and learned to "wield the weapon" of electoral politics to help build stronger social movements for a more democratic and just society, as one of our leaders Wilma Chan used to say. Wilma is now in the California State Assembly.

CPA also sparked my interest in US China relations, fighting against anti-Asian violence, and connecting immigrant rights and workers rights and economic justice for our communities."[9] 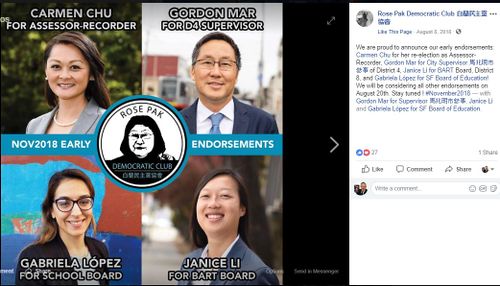 We are proud to announce our early endorsements: Carmen Chu for her re-election as Assessor-Recorder, Gordon Mar for City Supervisor 馬兆明市參事 of District 4, Janice Li for BART Board, District 8, and Gabriela Lopez for SF Board of Education! We will be considering all other endorsements on August 20th. 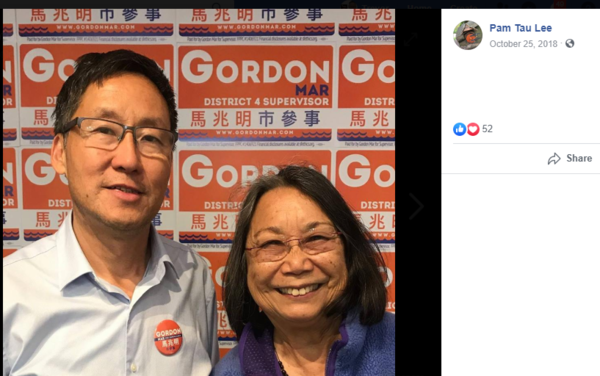