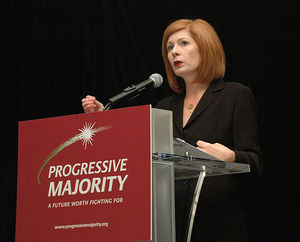 Gloria Totten served as Political Director for NARAL from 1996-2001. There she ran NARAL's largest department - overseeing the organization's electoral work, grassroots organizing and field program, and managing 27 state affiliates. During the 2000 elections, Gloria implemented a more than $12 million electoral program, running simultaneous independent expenditure campaigns in 16 states for the Presidential, 8 Senate races, and 24 House races. Gloria worked to develop NARAL's first nationwide pro-choice voter file, which was the strongest in the country with 2.9 million pro-choice identified voters by the time she left her position. She also devised all of NARAL's advocacy campaigns, including numerous ballot initiative campaigns, legislative battles and the Stop Ashcroft! Campaign in 2001.

From 1993-1996 Gloria was the Executive Director for Maryland NARAL. During her tenure, she served as the organization's chief lobbyist and strategist, chairperson for the state pro-choice coalition, director of the PAC, and was responsible for raising the annual operating and program budgets. Gloria was a recognized leader in the NARAL Pro-Choice America network: she served as affiliate representative to the national NARAL Pro-Choice America Board of Directors; and her affiliate was the recipient of the 1993 Campus Organizing Award, 1994 Diversity Organizing Award and 1995 Outstanding Affiliate Award.

In her home state of Minnesota, Gloria worked on a number of campaigns, including Sharon Sayles Belton for Mayor of Minneapolis, Paul Wellstone's 1990 campaign for U.S. Senate, and the Walter Mondale, Michael Dukakis and Tom Harkin Presidential campaigns. She also worked as the Education Director for Pro-Choice Resources, President and Lobbyist for the Minnesota Coalition Against Sexual Assault and Media Chair for It's Time Minnesota! She has dedicated her professional and volunteer time to progressive issues ranging from rallying for workers' rights to expanding the definition of the Minnesota Human Rights Code.

Totten serves on the Boards of Directors for Advocates for Youth, Gadflyer.com and True Majority ACTION PAC. She is the President of the Ballot Initiative Strategy Center and an Advisory Committee Member for the Women's Information Network, the Drum Major Institute Scholars Program and Wellstone Action. Gloria Totten was named a "Rising Star of Politics" in 2002 by Campaigns & Elections magazine.[1]

The fundraiser was at the Stanley & Betty Sheinbaum residence in Brentwood. Both Sheinbaums have been members of Democratic Socialists of America.[2]

Gloria Totten, Progressive Majority, was a 2006 Rockwood Leadership Institute National Leading From the Inside Out Alum.[3]

On March 17, 2008, Michael Podhorzer, Matt Stoller, Gloria Totten and Kristina Wilfore spoke in a session entitled "Election 2008: The Map", at that year's Take Back America conference.

Gloria Totten was one of the 158 speakers who addressed the Take Back the American Dream Conference 2011 . The Conference was hosted by the Institute for Policy Studies, and Democratic Socialists of America dominated Campaign for America's Future, [4]

Progressives in an Obama world

The forum blurb identified Obama as a "progressive" and went on to say;

Since the 2004 election, the progressive movement has built a powerful infrastructure of think tanks, media outlets and advocacy organizations. Frustrated by the conservative ascendancy and the dominance of conservative ideas, individuals and institutions have put forward new paradigms for government and promoted a bold vision for the future.

But now a progressive holds the highest office in the land. As the movement struggles to define its role in the Obama era, important questions remain unanswered: What is the role of such organizations in Washington and how can they best create political space for Obama to act? On what issues should the movement compromise and on which take strong stands? How can progressives build consensus to make their efforts more effective?

The panel will feature progressive leaders Deepak Bhargava, Miles Rapoport and Mike Lux; the speakers will draw on two new books, ‘Thinking Big: Progressive Ideas for a New Era,’ and The Progressive Revolution: How the Best in America Came to Be, as they discuss what progressives can do to create momentum for greater boldness at a time when opportunities and challenges abound.

In 2009 Gloria Totten was listed as a member of the Advisory Board[6] of Wellstone Action, a Minnesota based organization based on the political legacy[7] of that state’s late ‘progressive” Senator Paul Wellstone.

In 2009 Gloria Totten, Executive Director of Progressive Majority was listed as a member of the Drum Major Institute DMI Scholars Advisory Council[8]

PowerPAC+ Board of Directors, as of 2014 included Gloria Totten - Washington DC President of Progressive Majority.[9]