Gavrielle Gemma aka Gavrielle Holmes, is a Southern Louisiana activist.

She is currently a member of the New Orleans Workers Group and an organizer of Take ‘em Down NOLA, an group that successfully fought to remove 5 Confederate statues from the city.

In 2011 Gavrielle Gemma, served on the Jobless Working Group of Occupy Wall Street.

Gavrielle Holmes also known as Gavrielle Gemma was a third-party candidate (Workers World Party) for President of the United States in the U.S. presidential election, 1984, receiving votes in Ohio and Rhode Island. For other states, the presidential candidate that year was Larry Holmes.

She had also been the running mate for Deirdre Griswold in the 1980 U.S. presidential election. 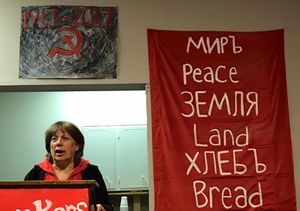 According to the blog All Power to the Soviets;

In October 1917, the working people of the Russian Empire stood up and took power in the first successful socialist revolution. With the Bolshevik Party playing a leading role, the workers, peasants, and oppressed peoples opened up a new chapter in the history of humanity. They showed the world that revolutionary people’s power is possible.

The New Orleans Workers Group has taken time this October to honor these heroes for the sacrifices they made towards a better future for the workers and oppressed peoples of the world. We have carried out cadre study groups, and had a showing of Soviet director Sergei Eisenstein’s landmark film, October: 10 Days that Shook the World.

We also had a lovely party and public forum on the Revolution, which included presentations on pre-revolutionary Russia, the role of the Bolshevik Party, the development of the Soviet Union in a global context, and the contemporary class struggle — all stressing the continuing need for Revolution today. Speakers included long-time revolutionary organizers Malcolm Suber and Gavrielle Gemma, as well as two young revolutionaries from south Louisiana, Quest Riggs and Gregory William.[2]