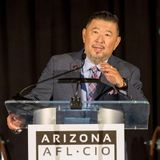 Fred Yamashita is Arizona AFL-CIO Executive Director. Yamashita a native of Detroit, Michigan, accepted his position at the AZ AFL-CIO in November of 2017. Prior to that he spent 20 years working for the United Food and Commercial Workers Local 99, before which he spent 20 years as a worker on the floor in the grocery industry.

Fred Yamashita served as Chair of the Pima Area Labor Federation from 2015 until moving back to Phoenix to accept the position as Executive Director.[1]

At Salt of the Earth

Fred Yamashita lecturing at Salt of the Earth Labor College.

At Salt of the Earth Labor College.

Carolyn Classen Paul Stapleton-Smith on the far right in the photo.

The Labor Movement in Action

Brother Yamashita will discuss some of the struggles facing organized labor and working people in this age of Trump. Did Arizona labor’s role in the mid term elections play out with increased participation and more union members running for office? Can some of the energy spent on elections be transferred to organizing and rebuilding the Labor Movement. [3]

With Steve Valencia and Carolyn Trowbridge at Salt of the Earth Labor College.