Frank Pallone, Jr. is a Democratic member of the United States House of Representatives, representing the 6th district of New Jersey.

On January 5, 2011 Frank Pallone, Jr. was sworn in for his 12th full term in the U.S. House of Representatives. Pallone represents New Jersey's Sixth Congressional District, which covers most of Middlesex County, as well as the Bayshore and oceanfront areas of Monmouth County, the Township of Plainfield in Union County and Franklin in Somerset County.[1]

Pallone married the former Sarah Hospodor in 1992.[2] She has been employed as the Deputy Associate Administrator, EPA Intergovernmental Relations [3]

Pallone began his political career in his home city of Long Branch, getting elected to the City Council in 1982 and winning re-election four years later. In 1983, Pallone was elected to the State Senate, representing the Monmouth County coastline. He was re-elected in 1987. During his tenure in the state Legislature, Pallone distinguished himself as an advocate for environmental issues and senior citizen concerns, and made a major priority of providing constituent services.

On November 8, 1988, at the age of 37, Frank Pallone, Jr., was elected to the House of Representatives from New Jersey's former Third District, encompassing parts of Monmouth and Ocean counties. In March 1992, a new Congressional district map for New Jersey was adopted. Portions of the former Third District were merged with parts of two other districts to create the Sixth Congressional District, taking in large portions of Middlesex and Monmouth counties. Pallone was first elected to the Sixth District seat in November 1992.[4]

In the 112th Congress, Pallone continues to serve as a senior member of the House Energy and Commerce Committee, which has jurisdiction over issues pertaining to energy, environment, health care, commerce and telecommunications.

Pallone is the top Democrat on the Committee's powerful Subcommittee on Health, which has sole jurisdiction over Medicaid, the Food and Drug Administration (FDA), the National Institutes of Health (NIH), the Centers for Disease Control (CDC), and shares jurisdiction of Medicare with the Ways and Means Committee. The Health Subcommittee oversees public health, biomedical programs, food and drug safety, mental health and research, hospital construction and all health care homeland security-related issues.

As Health Subcommittee Chairman during the 111th Congress, Pallone played a leading role in passing the Affordable Care Act.

Pallone holds an important leadership position within the House Democratic Caucus. As the Communications Chair of the Democratic Policy Committee, the New Jersey congressman plays an active role in developing and implementing the Democratic Party's message. In this capacity, Pallone coordinates the party's message on the floor of the House of Representatives.[6]

Frank Pallone, Jr. wrote a letter of support to the Council on American-Islamic Relations (CAIR) on the occasion of their 24th anniversary in September 2018.[7]

On October 21, 1998, many Members of Congress wrote a letter to President Bill Clinton, urging him to release information to a Spanish judge investigating former Chilean President Pinochet for alleged crimes committed during and after the overthrow of the Marxist Allende government.

The October 17 arrest of General Augusto Pinochet in London is a good example of how the goals you outlined in your anti-terrorism speech at the United Nations can be put into practice. Indeed, when the rule oflaw is applied to combat international lawlessness,humanity's agenda gains...we call upon you to ensure that the U.S. government provides Spanish Judge Baltasar Garzon material related to Pinochet's role in international terrorism -- material and testimony that the U.S. government has thus far withheld.

The Council for a Livable World, founded in 1962 by long-time socialist activist and alleged Soviet agent, Leo Szilard, is a non-profit advocacy organization that seeks to "reduce the danger of nuclear weapons and increase national security", primarily through supporting progressive, congressional candidates who support their policies. The Council supported Frank Pallone, Jr. in his successful House of Representatives run as candidate for New Jersey.[9]

In October 2005, Members of Congress urged the State Department to lift a fundraising ban on Sinn Féin in advance of the upcoming visit to the U.S. of party leader Gerry Adams.

And that very visit could be in jeopardy if the specific Adams fundraising component is denied by the U.S. government.

Seven members of the House of Representatives have signed on to a statement in which they say they “strongly oppose efforts to ban Sinn Fein fundraising in the United States.”

The signatories include the Republican chairman of the Friends of Ireland group in Congress, Rep. James Walsh, and Rep. Richie Neal, a Democratic co-chair of the Ad Hoc Committee on Irish Affairs.

The group plays up its bipartisan composition in a statement in which they express “in the strongest possible terms our opposition to any effort that would prohibit Sinn Fein from raising funds.”

“We believe that the Sinn Fein leadership has kept its word and honored its commitments. At this critical moment in the peace process, they should not be penalized for delivering on their promises,” it added.

Following discussions March 16, 2006 with Sinn Fein President Gerry Adams a number of senior US representatives agreed to lobby the British government to reconvene the Assembly in the short term.

A Sinn Fein spokesperson described all of the meetings as "very positive and constructive. The conversations concentrated on the need to make progress and on our proposals for breaking the logjam. This means movement by the British and Irish government‚s before the summer and well in advance of the marching season.[11] 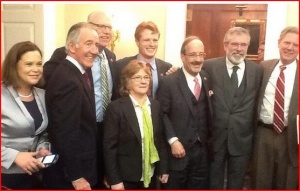 Voted against cutting funding for ACORN

In September 2009, following the lead of their Senate colleagues, the House of Representatives voted overwhelmingly to cut off funds to ACORN. the vote was 345-75. All of the 75 were Democrats, and included Frank Pallone, Jr.. [15]

As of February 20 2009 Frank Pallone was listed as a member of the Congressional Progressive Caucus.[16]

In June 2013 Progressive Democrats of America assigned activists to deliver their material to almost every US Congressman and several Senators. Catherine Hunt was assigned as contact for Rep. Pallone.[17]

In a letter sent to NKR President Bako Sahakian, timed to coincide with the February 20th launch of the Artsakh liberation movement in 1988, Rep. Pallone noted that “Artsakh's path was challenged by various ordeals and your nation refused to allow these obstacles to break your will and determination. The tragedy of Sumgayit and the violence that occurred in other Azerbaijani cities 25 years ago proved the virtue of Nagorno Karabakh's choice to preserve its people's unique identity by establishing a sovereign democracy.”[18]

I want to thank CAIR for giving our Muslim neighbors, friends and family an opportunity to share their voice throughout the country.”

The law, often referred to as “Obamacare,” is currently under threat. The U.S. Senate voted at around 1:30 a.m this morning to approve a procedure that will let them potentially repeal parts of the ACA through a reconciliation bill, which enables the Congress to make changes to spending and tax legislation and, crucially, is filibuster proof. Reconciliation was used to pass the ACA in 2010.

Earlier today, Payne, Jr. delivered a speech on the floor of the U.S. Congress to highlight how Republican efforts to repeal the Affordable Care Act will affect Americans who depend on the law for their healthcare. He shared a story about how the ACA had helped a constituent who faced dire health problems, in order to humanize what is at stake if the legislation is repealed.[21]

Signing up Doggett is important. He chairs the House Ways and Means Health subcommittee, which co-writes medical care legislation on that side of Capitol Hill. NNU will now concentrate on members of his panel and on a recalcitrant Rep. Frank Pallone, D-N.J., who chairs the other key panel for health care bills, the Energy and Commerce Committee.

Our Revolution, the citizens’ group allied with Sen. Bernie Sanders, Ind-Vt. – author of that chamber’s Medicare For All bill – is keeping the pressure up on Pallone, said Anna-Marta Visky, chair of the group’s Monmouth County, N.J., affiliate.

“We and our coalition partners are asking him (Pallone) to co-sponsor it and give it a fair hearing,” she said. “He wants to keep it in a hearing with other proposals” on health care. “He takes a lot of dollars from the (health care) industry and is one of the entrenched old-school Democrats – but he’s noticed our movement.”[22]

The following are past and present staff:[23]