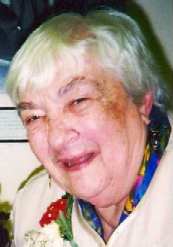 From her earliest youth she was an active participant in labor's struggles. During the 1930's she was involved in cultural activities that entertained sit-in strikes during the CIO organizing campaigns. She was active in the defense of the Scottsboro boys and an active member of the Young Communist League USA and student of Marxism Leninism. In 1939 she joined the Communist Party USA in Philadelphia, and was soon to become the chairperson of the then 4th Congressional District[1].

Frances Gabow has been active in civil rights struggles. She led the first demonstrations to desegregate Woolworths in Philadelphia, and fought to defend the foreign born. She was called before House Un-American Activities Committee during the 1950s and was cited by the Attorney General under the infamous McCarren Act. She has run for elected office and was active in the struggles to end the Korean and Vietnam Wars. Today, she is involved in the Philadelphia Area Coalition to Defend Public Healthcare, in the coalition to fight the high price of gas, as well as political action[2].

The shocking events of 9/11 have energized her to include resistance to the George Bush War and calling for world unity to combat terrorism.

In 1972 Frances Gabow was Communist Party USA candidate for Secretary of State of Illinois.[3]

A partial list of sponsors for a January 19, 1973 Reception in Chicago for Communist Party USA leader Claude Lightfoot included;

In 1976 Frances Gabow was Communist Party USA candidate for Secretary of State for Illinois.[5]

In September 2006 the Peoples Weekly World listed several members, or supporters of the Pennsylvania Communist Party:[7]