From KeyWiki
(Redirected from Frances Farenthold)
Jump to: navigation, search 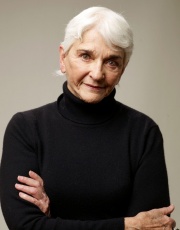 Frances (Sissy) Farenthold is a Texas activist and politician.

Bernard Rapoport was a lifelong supporter of the Democratic Party, starting with Homer Rainey's gubernatorial campaign in 1946. He later supported Ralph Yarborough, Frances Farenthold, Ted Kennedy, Alan Cranston, and George McGovern, during whose campaign in 1972 Bernard met Bill Clinton and Hillary Rodham. From 1974 onward, Rapoport donated to every one of Bill Clinton's campaigns and served as fundraiser for both presidential bids.[1]

Cablegram to Portugese Socialists and the M.F.A.

In 1974, after a pro-communist military coup in Portugal;

More than eighty Americans, all identified with opposition to the Vietnamese war and with various radical and liberal causes, sent on August 9 a cablegram to to the Portugese Armed Forces Movement, to Portugese president francisco da Costa Gomes and to portugese socialist leader Mario soares expressing the hope that "democratic freedoms"...will continue to grow in Portugal".

At the same time he was selling U.S. secrets to the Soviet Union, former FBI special agent Robert Hanssen was a key supervisor in a 1980s domestic-spying program questioning the loyalty of American citizens and monitoring their activities, FBI documents have shown.

Under this program, federal agents filed reports on teachers, clerics and political activists who primarily were affiliated with liberal causes.

For instance, one document included is the entire list of U.S. delegates to the 1987 World Congress of Women convention in Moscow. They ranged from the likes of former Texas legislator and human rights activist Frances "Sissy" Farenthold to the Rev. Nan Brown, a Baptist minister from Palmyra, Va. Brown said she went to Moscow simply because she wanted to look at the Soviet education system.

"I'm astounded, really," she said when informed that her name was in the files. "I only went because I wanted to go to the conference." [3]

In Geneva with Gorbachev 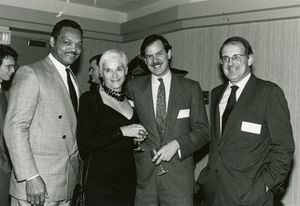 In 1985 Robert Borosage, Sissy Farenthold and Rev. Jesse Jackson as members of delegation who met with Mikhail Gorbachev in Geneva, at the Reagan/Gorbachev Summit.

A vocal opponent of the Vietnam War, Bill Aleshire applied for, and got, conscientious objector status, an issue that he says caused more than a little conflict with his military officer father. Part of the work he did as community service in lieu of military service was to work in the Texas Legislature. He worked as a volunteer for The Dirty 30, a group of reformist legislators that included Reps. Sissy Farenthold and Lloyd Doggett, among others.[4]

Frances Farenthold is a member of the Board of Trustees of the Institute for Policy Studies. She is an attorney and a former member, of the Texas legislature.[5] 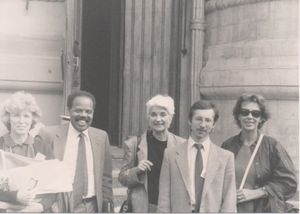 Women for a Meaningful Summit

In 1989 Sissy Farenthold served on the Board of Directors of Women for a Meaningful Summit. 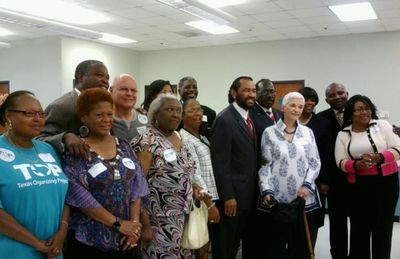